CHAPTER 5: SOILS IN THE CONTEXT OF CLIMATE CHANGE

5.1 Soils and climate are intimately linked. Climate has a direct influence on processes of soil formation and partially determines the extent to which soils can perform individual functions. Soils also have the potential to influence climate through greenhouse gas ( GHG) exchange with the atmosphere and by storing carbon. Climate change can therefore be expected to have a fundamental effect on soil properties and functions.

5.2 Current climate change predictions suggest that Scotland's climate will become warmer, with drier summers and wetter winters, and there will be an increased risk of storm events ( 13). These trends will vary locally e.g. the current east-west differences in rainfall pattern are predicted to get more extreme. In addition, sea level is expected to rise with more frequent and potentially damaging storm surges ( 14).

5.3 Carbon dioxide (CO 2), the principal GHG, is transferred between the atmosphere, land and oceans via a number of processes, collectively known as the carbon cycle (Figure 5.1). The rates of these processes are finely balanced and changing any one of them could have a significant effect on the concentration of CO 2 in the atmosphere as well as the amount of carbon in the soil.

5.4 In addition to CO 2, the GHGs methane (CH 4) and nitrous oxide (N 2O) are produced by processes occurring in soil and although they are emitted in smaller amounts than CO 2, their relative contribution to climate change is important as they have a much greater warming effect than CO 2. This is significant in a Scottish context given the large areas of peatland and fertilised agricultural soils which are the principal sources respectively for these gases.

5.5 In the Climate Change (Scotland) Bill, introduced to Parliament in December 2008, the Scottish Government is proposing challenging targets to reduce GHG emissions by 80% of 1990 levels by 2050 ( 15). Figure 5.2 shows Scottish emission levels in 2005 and the target for 2050. The combined agriculture, land use and forestry sector is relatively large in Scotland compared to other parts of the UK ( 16). Soil management practices which reduce GHG emissions and/or promote carbon storage in soil could therefore play an important part in achieving this target. 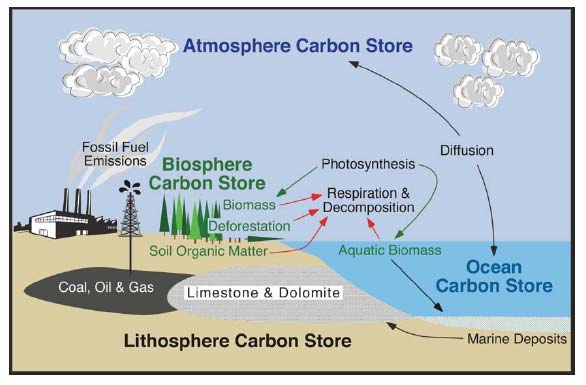 Figure 5.2 Total net GHG emission in 2005 in Scotland by sector, compared to the target for total net emissions in 2050. 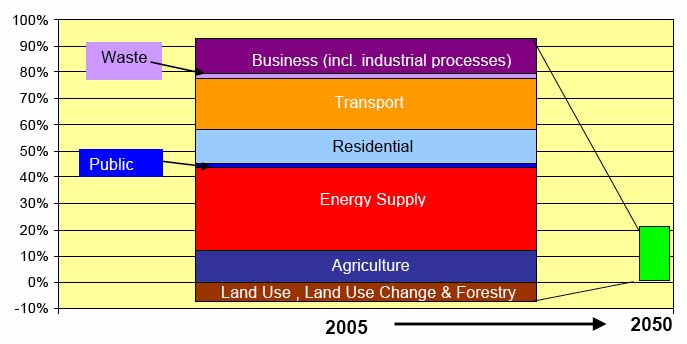 5.6 Many of the direct impacts of climate change on soils are based on the premise that a warming climate is likely to have an impact on organic matter levels in soil. This is significant because soil organic matter comprises up to 50 % carbon and is the principal store of carbon in soil. It is considered likely that warmer temperatures will stimulate soil organic matter to decompose more rapidly than under present conditions, resulting in CO 2 emissions to the atmosphere and loss of carbon from the soil.

5.7 Soil organic matter content is a fundamental property of soil because it determines the soil's capacity to deliver many of its other functions, including storing, retaining and transforming water, nutrients and contaminants as well as sustaining biodiversity and storing carbon. Thus, any loss of soil organic matter will have wider consequences for the environment.

5.8 Table 5.1 provide some examples of how climate change may affect each of the soil functions identified in Chapter 2. It is not intended to be comprehensive, but to illustrate some potential impacts that climate change may have on our soils. As outlined above, many of these are directly related to the loss of soil organic matter.

Impact of soils on climate change

5.9 Not only does climate influence soil properties (and functions), soil also has a direct role in regulating climate via the uptake and release of GHGs and by storing carbon. These processes determine in part the composition of the atmosphere and thus the Earth's climate.

5.10 On a global scale, soils contain about twice as much carbon as the atmosphere and about three times as much as vegetation ( 17). Small changes in the global soil carbon store could therefore have a significant effect on atmospheric CO 2 concentrations.

5.11 Various processes influence the carbon flux between the land and the atmosphere (Figure 5.1). For example, plants capture CO 2 from the atmosphere and convert carbon to plant biomass via photosynthesis. Subsequently the degradation of fresh plant material slowly accumulates in soils as organic matter. Meanwhile, in soil, root respiration and decomposition of organic matter return carbon to the atmosphere as CO 2 (or as CH 4 under anaerobic conditions). However, the rates of these processes are themselves dependent on the prevailing climate.

5.12 Soils are also an important source of the greenhouse gas nitrous oxide (N 2O) with fertilised agricultural soils being responsible for the majority of Scotland's N 2O emissions ( 18).

5.13 As well as a changing climate, land management practices can influence the rate and magnitude of GHG emissions from soils. For example, GHG emissions are likely to increase as a result of ploughing grassland to create arable land or as a result of N fertiliser application to land under certain conditions. In fact, any disturbance of organic matter-rich soils, such as forestry operations or construction projects, may result in CO 2 emissions. There is however potential to offset some of these emissions by careful soil management such as minimising the period that the soil is bare and maximising the use of cover crops.

5.14 Scotland is required under IPCC reporting requirements to report total greenhouse gas emissions in an annual inventory. GHG emissions are reported on a sectoral basis, two of which have direct relevance to soils:- agriculture; and land use, land use change and forestry ( LULUCF) ( 16) (Figure 5.2). By definition, the agriculture sector only deals with direct emissions and not with those associated with land use changes which are covered in the LULUCF sector. The LULUCF sector is the only one that can be a sink of greenhouse gases (Figure 5.2) Although the inventory considers all GHGs, it reports emissions in terms of CO 2 equivalent units (CO 2eq) to take into account the differences in warming potential.

5.15 The latest Scottish Greenhouse Gas Inventory estimated that soil carbon stock changes in land converted to cropland emitted 6.6 Mt of CO 2eq for 2006 while converting arable land to grassland in the same time period removed 2.8 Mt CO 2eq from the atmosphere. Specific land use changes can therefore help offset GHG emissions whilst others can exacerbate them.

5.16 The potential impacts of climate change on soil (and vice versa) are not restricted solely to soil but also affect the wider environment, as outlined in Table 5.1, and thus have to be considered by other policy areas. Policy areas most likely to be affected include Land Use and Management including Agriculture and Forestry, Water Quality and Flooding, Planning and Conservation and Biodiversity. These are discussed in general below and in more detail in subsequent chapters.

5.17 There are increasing concerns regarding food security and an increasing demand for food to be grown locally, both issues partially driven by climate change themselves. Climate change could potentially increase the area of prime agricultural land in Scotland suitable for intensive agriculture (Figure 5.3) and thus support increased food production. However, an extension of areas suitable for agriculture could impinge on areas of high conservation and / or biodiversity value. Increasing agricultural production could also result in increased GHG emissions resulting in a positive feedback to climate change.

5.18 An increase in the amount of land required for development as a result of a northwards migration of population may also result in a loss of prime agricultural land, thus reducing the area available for food production. To meet food production and food security objectives, there might be the need to afford prime agricultural land more protection from development.

5.19 Water quality is likely to be adversely affected by an increase in flooding and / or erosion events. Flooding and erosion can cause potential pollutants, such as sediment and nutrients, to be transported into water courses, potentially degrading both chemical and ecological water quality, and thus impact targets required under the Water Framework Directive. Both flooding and erosion can be mitigated to some extent by appropriate soil management and this is recognised in recent policy developments, for example in the Flood Risk Management (Scotland) Bill and also in cross-compliance requirements of Common Agricultural Policy reform ( GAEC).

5.20 Renewable energy is used as an alternative to producing energy from the burning of fossil fuels, reducing GHG emissions and thus mitigating climate change and a number of these options impact on soil. Biofuels and biomass are part of the renewable energy portfolio of options that may offer positive contributions. The net GHG emissions associated with any land use change and fertiliser inputs required to grow energy crops need to be assessed in more detail ( 19). Similarly, the social and economic consequences of diverting land away from food production need to be considered, alongside those of conservation and biodiversity. 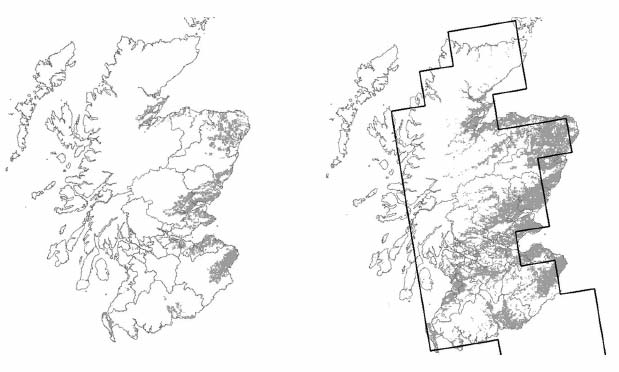 5.21 In Scotland, optimal sites for wind farms are often on carbon rich soils which may also have high conservation value. GHG emissions may occur from soil disturbance during the construction process. It is therefore essential to consider the carbon trade-offs when developing carbon-saving energy systems on landscapes that store large quantities of carbon.

5.22 This chapter has outlined the complex nature of the relationship between soils and climate change, discussed the effects of climate change on soils and vice versa, as well as considering the impacts of these on the wider environment, and the implications for various policy areas. Chapter 6 and Annex B outlines in more detail the range of policies that impact in some way on soil; this is not a comprehensive inventory, but it exemplifies the cross cutting impact of soils.

5.23 Chapter 7 outlines a number of actions by different stakeholders that will contribute to a number of desired outcomes. Many of these actions are designed to promote both mitigation of climate change and adaptation to climate change through soil management and as a result help protect the wider environment as well as the soil resource itself.