CHAPTER 3: THE DIVERSITY OF SCOTTISH SOILS

3.1 The distribution of the principal soil groups in Scotland is shown in Figure 3.1. The characteristics of Scottish soils are determined by the cool maritime climate and the underlying geology, that is predominantly composed of acid rocks and which are generally resistant to weathering ( 1).

3.2 Scottish soils are, in general, more organic, more leached and wetter than those of most other European countries. Scotland contains greater proportions of podzols (dry and acid soils; 23.7% of the land area), peat soils (22.5%) and gleys (wet soils; 20.6%) than Europe as a whole. Figure 3.1 illustrates the contrast between soil types in the Central Valley and those in the Highlands and Southern Uplands. The Central Valley is dominated by mineral soils, whereas the Highlands and Southern Uplands are dominated by peaty soils (peat, peaty gleys and peaty podzols) especially in the west.

3.3 Scottish soils are estimated to contain approximately 3000 million tonnes carbon, which is the majority of the soil carbon stock of the whole of the UK ( 7, 8).

3.4 The diversity of soil types coupled with climate and topography explains the differences of soil and land use in Scotland compared to other parts of the UK, and accounts for the wide range of functions associated with Scottish soils. Almost all soils produce above-ground biomass, however the land cover map of Scotland (figure 3.2) shows that only around 25% of the area of Scotland is used for arable crops and improved grassland, with a further 17% under forestry.

3.5 Arable crops are primarily located in the eastern half of the country and improved grassland in the south west. These land uses are almost entirely associated with mineral soils. Although these soils are not particularly distinctive and are similar to cultivated soils elsewhere in the UK, they are valuable for their agricultural productivity.

3.6 The remainder of the country is under semi-natural vegetation, such as heather moorland, native woodland, blanket bog and montane habitats, land covers which are dominant in upland Scotland. These habitats are associated with highly organic soils. Many of these habitats are of high conservation value and are unique to Scotland and the soils that underpin them are rare in a UK, European, and in some cases, a global context.

3.7 Soils underlying the large areas of semi-natural vegetation in the uplands and moorlands are of great importance for wider environmental functions, such as carbon storage, biodiversity and water storage and filtration, as opposed to biomass & food production.

Figure 3.1 The soils of Scotland ( MLURI) 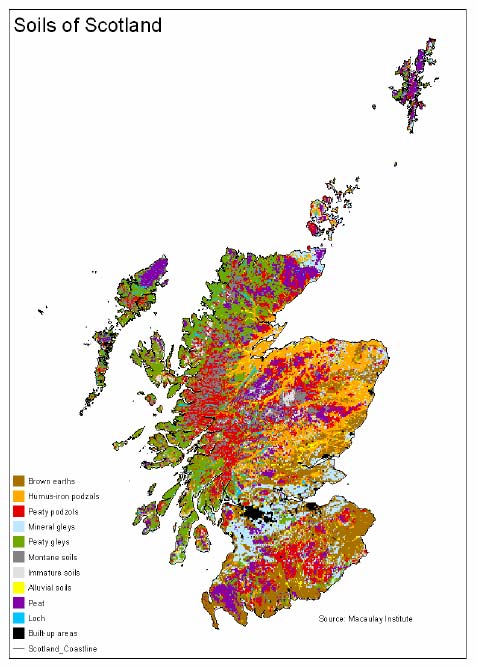 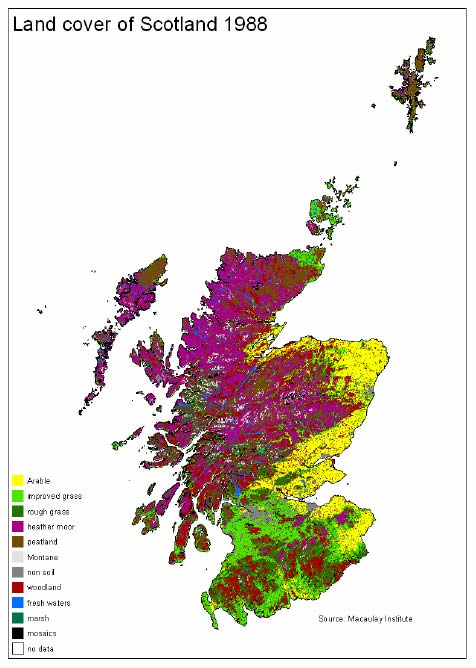 3.8 Recently, Towers et al. ( 9, 10) have proposed a methodology to assess the potential conservation values of soils based on measurable criteria (rarity, complexity and diversity) for Scottish soil. There is a pressing need for this methodology to be developed further to include cultural heritage and historic environmental values.

3.9 In addition, the Land Capability for Agriculture classification, developed in the early 1980's as a systematic basis for defining areas of natural handicap in relation to agriculture in Scotland ( 11 ) is currently under review to include impacts of climatic change on soil properties and hence soil functions.

3.10 The unique nature and diversity of Scottish soils calls for unique protection policies, tailored to specific soils properties, functions and locations. In particular the potential of soils to become significant sources of the greenhouse gases carbon dioxide, methane and nitrous oxide mean that specific sustainable management strategies are required.