4.1 In 2001 SEPA published the State of the Environment: Soil Quality Report ( 12) which identified the main pressures on soils. Towers et al. ( 1) undertook a comprehensive review on the state of and threats to the Scottish soil resource, which is summarised in Figure 4.1. Some of the impacts associated with these threats are also indicated. 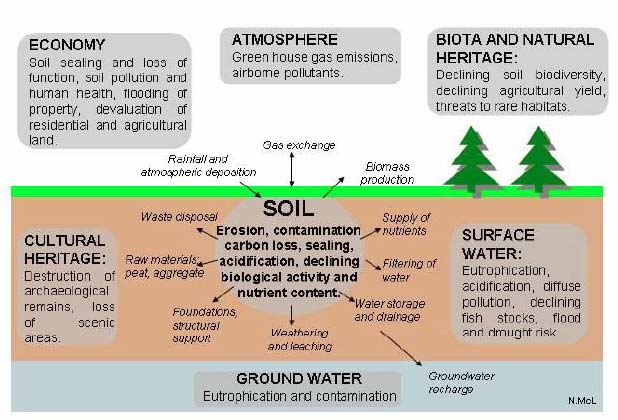 4.2 Although man has clearly had an impact on the Scottish soil resource (including some large scale disturbances such as deforestation and urban growth), Towers et al. ( 1) found that soils in Scotland are generally in good health due largely to the sustainable management employed by land managers over a prolonged period. The authors cautioned however that there was a lack, or in some areas absence of data from which to make robust conclusions. In particular there was a lack of trend data from which evidence of change in, and damage to soils might be determined.

4.3 Box 4.1 provides a summary of the analysis of national threats undertaken by Towers et al. ( 1).

4.4 The analysis undertaken by Towers et al. ( 1) does not recognise the interaction between the threats for example the relationship between soil organic matter levels and soil erosion, whereby organic matter may help to reduce erosion risk in many soils. It is also important to bear in mind that the threats listed above are not static, as they may vary in their intensity over time. Management techniques and technological advances, such as the use of poly tunnels and heavier machinery can also increase the likelihood of specific threats.

4.5 Due to lack of evidence, threats like depleted or excessive nutrient levels in soils were not considered ( 1). Emerging potential threats including nano-particles, acidification in previously cultivated land and moorland burning may require consideration in any future analysis.

4.6 Table 4.1 provides an indication of the relationship between the threats identified ( 1) and the primary function(s) of soil discussed in Chapter 3. This analysis provides the broad context for Chapter 7 where planned activities and outcomes aimed at minimizing these threats and maintaining soil functionality are set out.

4.7 A common thread in the assessment of the pressures on soils is the lack of systematic baseline data in some cases and a lack of trend data for nearly all cases. Long term baseline data from field sites and/or national datasets are clearly essential to detect change and trends in Scottish soils with a view to assess the effectiveness of policies in place to protect soils.

Table 4.1 Threats to soils and their potential impact on soil functions: a preliminary analysis.