1.1 The Scottish Soil Framework sets out the vision for soil protection in Scotland, and formally acknowledges the important services soils provide to society.

1.2 Scotland's soils provide food, biomass and raw materials. They store, filter and transform many substances, including water, nutrients and carbon. They serve as a platform for human activity and landscape, and as an archive of heritage and play a key role as a habitat and gene pool. Because of the socio-economic and environmental importance of these functions, it is important that Scotland's soils are managed sustainably - so that they retain the capacity to carry out the vital services on which we depend ( 1, 2, 3, 4).

Soil protection and the Government's Purpose

1.3 The Scottish Government has made increasing sustainable economic growth its overarching purpose. To achieve this purpose, the Government has identified 15 National Outcomes, including:

We value and enjoy our built and natural environment and protect it and enhance it for future generations.

Protecting Scotland's soils aligns with and supports the Government purpose of increasing sustainable economic growth and the National Outcome identified above.

1.4 The Government has also identified 5 Strategic Objectives, which play a key role in focusing the activity of Government and its delivery partners. Sustainable soil use contributes in particular to the Greener objective.

Because of its wide-ranging functions, sustainable soil use also contributes towards other Government Strategic Objectives, including the Wealthier & Fairer, Healthier and Safer & Stronger objectives. In particular, healthy and functioning soils are essential for wealth creation in forestry and agriculture.

1.5 Scotland's soils are one of the Nation's greatest natural assets and are at the heart of most terrestrial life. However, unlike other key natural assets such as air and water, relatively few policies exist which are specifically targeted at the protection of soil itself. Existing policies (e.g. for environmental protection, agriculture, forestry, recycling of organic materials, planning) may all make a contribution to soil protection, but each focuses on a particular function of the soil, rather than on the soil itself. Because of this fragmented nature, existing policies are limited in their combined effectiveness to protect soils. In addition, they are spread across many policy areas and organisations. They do not constitute a coherent soil protection policy, because they do not cover all soils and all threats to soils.

1.6 Unlike air and water, which are widely accepted to be mostly public goods, soils and land are usually in private ownership. Whilst the majority of soils in Scotland are well managed, the costs resulting from those soils that are degraded are often not entirely borne by the immediate land users, but are also borne by society at large (e.g. greenhouse gas emission from soils; excessive nutrient runoff and poorly managed soils contributing to flooding).

1.7 Against the background described above, the Scottish Soil Framework has been developed with support from a wide range of relevant stakeholders, to raise the awareness about the services that soils provide to society, and the pressures that soils face.

1.8 The principal aim of the Scottish Soil Framework is to:

Promote the sustainable management and protection of soils consistent with the economic, social and environmental needs of Scotland

1.9 The Framework acts as an overview for soil protection in Scotland (Figure 1.1), bringing together key delivery partners, including Scottish Environment Protection Agency, Scottish Natural Heritage, Forestry Commission Scotland and Historic Scotland, as well as land managers, research organisations and other stakeholders working towards the soil outcomes described in detail in Chapter 7.

1.10 The Framework does not set out new policy measures that impact on land management. Equally, it does not contain detailed guidance for practitioners. It does, however, raise awareness of the need to improve policy integration by fostering a mainstreaming approach - changing the way existing functions are carried out, rather than adding new ones. The vision underlying the Framework is that:

Soils are recognised as a vital part of our economy, environment and heritage, to be safeguarded for existing and future generations in Scotland.

1.11 It is clear that achieving the soil outcomes can only be taken forward through joint effort with the key delivery partners and stakeholders listed above. At the heart of the Framework is the establishment of a Soil Focus Group, which will provide a platform for liaison and pooling of resources and information.

The Structure of the Scottish Soil Framework

1.12 Chapter 2 of the Framework describes the importance of soils and its functions, while Chapter 3 sets out the diversity of Scotland's soils. The pressures on soils are identified in Chapter 4, with the role of soils in the context of climate change outlined in Chapter 5. The current policy framework for soil protection is described in Chapter 6. Finally, Chapter 7 outlines the future focus and activities to be taken forward in relation to outcomes. 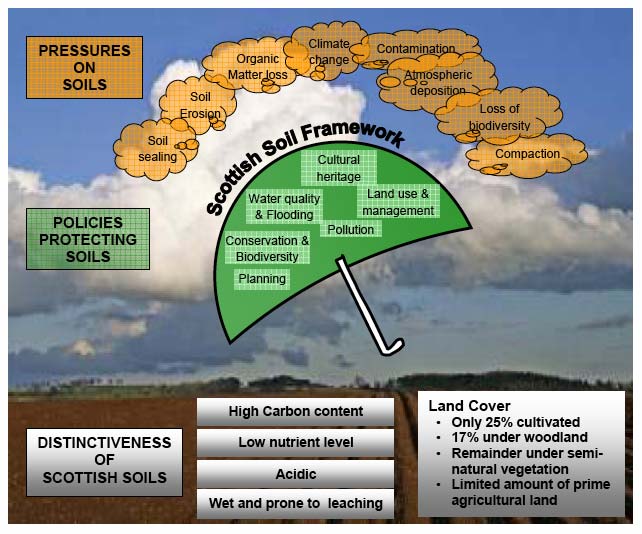