Background
Waste is produced from a variety of sources including households, industry, construction and agriculture. Waste can have a serious impact on the environment through the loss of finite resources and the generation of pollutants. Recycling is one means to reduce Scotland's waste impact by transforming waste into new and useful products.

The waste hierarchy [90] governs the design of waste prevention and management legislation and policy. It places an emphasis on seeing waste as a potential resource, with landfilling at the bottom of this hierarchy with waste prevention, preparation for reuse and recycling at the top of the hierarchy. Sending waste to landfill not only results in the loss of resources but also leads to further extraction and processing of raw materials which may consume large quantities of energy, release pollutants and destroy landscapes and ecosystems.

Waste management accounted for around 5% of Scotland's net greenhouse gas emissions in 2014, so reducing the impact of waste types that have the largest contribution to this helps with meeting Scotland's climate change targets.

Many targets have been set with the aim of reducing waste, most of which are set out in Scotland's Circular Economy Strategy [91] : 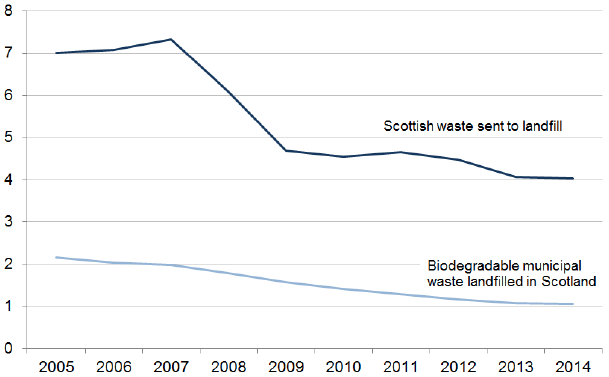 Why this measure is important
Sending waste to landfill results in the loss of valuable materials and generates pollutants. In particular, biodegradable waste such as paper, food and garden waste emit methane, a greenhouse gas. Reducing this is critical for meeting Scotland's climate change targets.

Background
The tonnage of Scottish waste sent to landfill (which includes waste landfilled outside Scotland) is measured by compiling a variety of sources, such as reports by the Local Authority on the destination of waste they have collected, and reported returns at accredited waste sites [93] . Scotland has a target of reducing biodegradable waste landfilled in Scotland in line with the EU Landfill Directive (99/31/ EC).

Factors affecting trend
Increased recycling rates and reduced generation of waste has had the effect of reducing landfill rates. These changes are likely to have partly been the result of the increases to landfill taxes. Landfill tax is intended to encourage waste producers to produce less waste, and promote recycling and waste recovery. The 2008 recession occurred alongside a sharp reduction in tonnage sent to landfill, which may be due to the reduction in the construction industry. Methods of food waste disposal can also have an impact on the tonnage of biodegradable waste sent to landfill, see Food Waste Disposal: 2012 - 2015.

Percentage of household waste recycled, composted or prepared for re-use 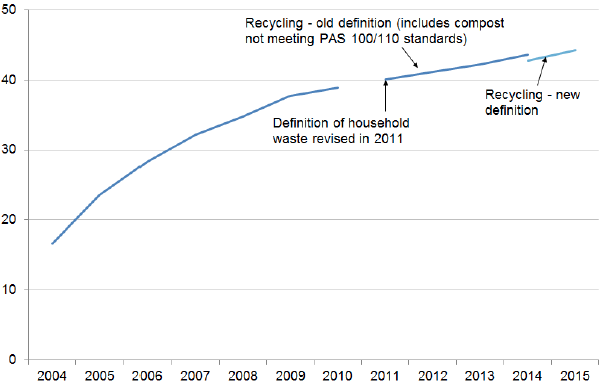 Why this measure is important
The dependence on landfill for waste management in Scotland is unsustainable since it involves the depletion of natural resources. Recycling is one of the most important ways of preventing waste going to landfill.

Background
Local authorities provide data to SEPA on the management of waste collected from households through kerbside collections together with waste that households take to "Bring" sites (such as recycling collection bins at supermarkets) and to civic amenity sites. The definition of household waste and recycling was revised in 2011 [94] . In 2014, a new definition of recycling was introduced which excludes composted waste that is produced by facilities not accredited to produce compost to the BSI PAS 100/110 standard. 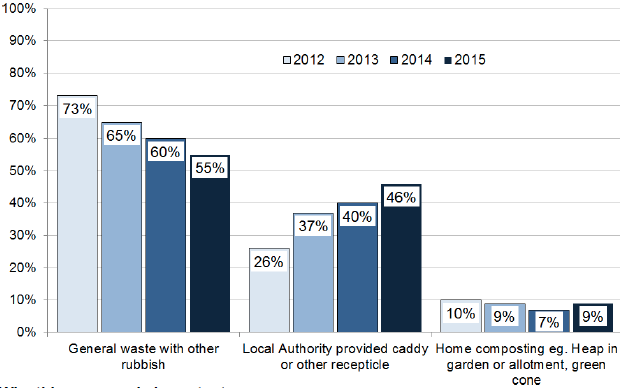 Why this measure is important
In 2013, Zero Waste Scotland estimated that 566,000 tonnes of food were thrown away by households in Scotland. Food is an essential resource, and wasted food costs households money and reduces the self-sufficiency of the economy. Home composting, or provision of food waste caddies, can help divert this waste from landfill into the production of compost or biogas.

Background
Household food waste recycling behaviour is measured as part of the annual Scottish Household Survey. Households were asked what methods, if any, they used to dispose of food waste in the past week. More than one method could be chosen.

Percentage surveyed who reported recycling waste items in the past month 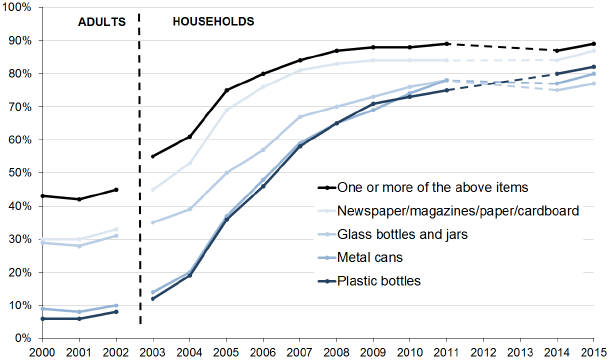 Why this measure is important
Re-using and recycling waste are vital to achieving sustainable development and Zero Waste objectives. One of the key drivers for this is individual recycling behaviour.

Background
The Scottish Household Survey provides information on recycling behaviour amongst households in Scotland. In the period 2003-2011, households were asked which of a selection of certain waste items, if any; they had recycled from home in the past month. Before 2003, the same question was asked of a random adult in the household. From 2014, households were asked a modified question asking if, in general, they recycled a selection of materials.

Factors affecting trend
Provision of recycling facilities and acceptance of the necessity of recycling has increased steadily over the years, leading to an increase in recycling amongst the general public. This upwards trend has tended to slow recently as easy gains have already been made and there remain harder system problems that prevent total recycling, such as the difficulty in providing facilities to tenement flats and remote properties.