The attitudes that people hold towards environmental issues can influence their behaviour with regards to the environment. In turn, the way in which a person interacts with their environment can have a positive effect on that individual and the environment itself, for example, increasing outdoor activity may improve the health of the individual and lead them to support environmental measures. Changes in attitudes can be encouraged through public initiatives and the conversion of positive attitudes to positive behaviour can be aided by ensuring that provision of appropriate resources are available to the public.

The Scottish Household Survey ( SHS) is a large annual survey that collects a wide range of information on the status and views of people and homes in Scotland. It is a vital tool to evaluate the effectiveness of policy and the composition, characteristics, attitudes and behaviour of households and individuals at a national and sub-national level.

Households are selected at random to take part in the survey, the major part of which is split into two separate modules. These are the Household survey, where questions are asked of the householder with the highest income, and the Random Adult survey, where a person aged over 16 in the household is selected to answer another set of questions. It is designed to be representative of Scottish society as a whole.

The survey began in 1999, and many of the questions in the SHS are asked for many years in a row, giving us a view of how the measures are changing over time. Nearly 10,000 people are surveyed each year in order to give coverage down to Local Authority level and to give an indication of important social demographics in Scotland.

Each year the SHS reports its findings in an annual report, detailing the key results across a wide range of features.

Which of these views, if any, comes closest to your own view about climate change? 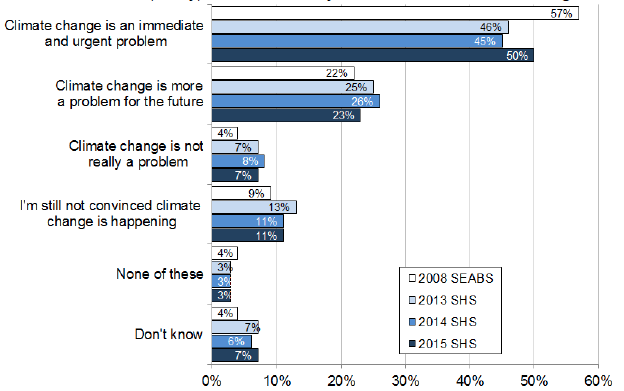 Why this measure is important
Public attitudes towards climate change are likely to influence their willingness to support initiatives to address climate change, as well as to take action themselves.

Background
From 2013 onwards, the Scottish Household Survey has included a question about attitudes towards climate change (although the sample dropped from around 10,000 in 2014 to around 3,000 in 2015). The same question had previously been asked in the Scottish Environmental Attitudes and Behaviours Survey 2008, so the results can be compared despite the slight differences between the surveys. Respondents were presented with four statements about climate change and asked which, if any, was closest to their own view.

Factors affecting trend
Weather patterns, including specific events such as flooding, as well as media coverage of these issues and of climate change more generally, may influence people's views on climate change.

Frequency of Use of Local Greenspace: 2015 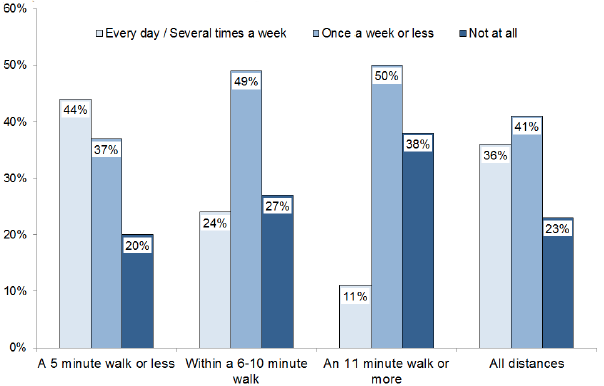 Why this measure is important
Regularly making use of good quality greenspace can improve people's quality of life by increasing their satisfaction with their neighbourhood, promoting physical health and mental wellbeing and reducing health inequalities. How often local greenspace is used can depend on how long it takes people to get there and how satisfied they are with the space.

Background
The Scottish Household Survey ( SHS) collects data on how accessible people's nearest usable greenspace is from their home (measured in terms of the time they think it would take the interviewer to walk there), their satisfaction with that space and how often they use it. Greenspace is defined in the SHS as public green or open spaces in the local area such as parks, play areas, canal paths and beaches (private gardens are not included). The Scottish Government has now introduced 'Improve access to local greenspace' as a National Indicator.

Trend
Walking distance to people's nearest greenspace and the frequency of use has remained fairly stable year to year, with those living closest to their local greenspace generally using it more frequently. In 2015, around 36% of adults reported that they visited their nearest greenspace at least several times a week, compared to 37% in 2014.

Factors affecting trend
People who report their health to be bad or very bad visit greenspace less often than others. Also, people aged over 75 are more likely not to use their local greenspace at all compared to other age groups, so an aging population may affect the trend in the longer term.

Percentage of adults making visits to the outdoors 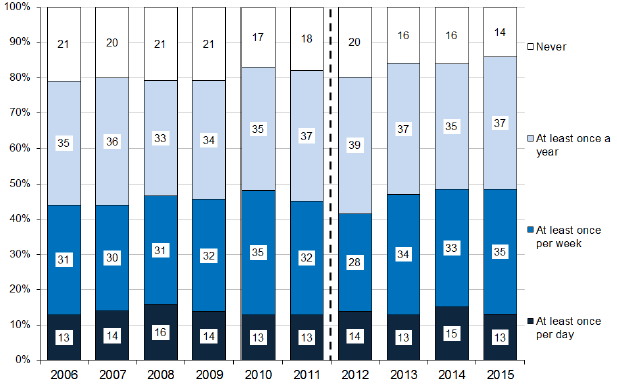 Why this measure is important
Outdoor recreation is beneficial for health and well-being. It also provides opportunities for people to come into contact with, and increase their understanding of, the natural environment.

Background
The data are taken from a sample of randomly selected adults in the Scottish Household Survey who were asked how often they visit the outdoors in Scotland. Prior to 2012, the data was sourced from the Scottish Recreation Survey produced by Scottish Natural Heritage, which included the same question [19] . The Scottish Government has established a National Indicator [20] to increase the proportion of adults making one or more visit to the outdoors per week.

Factors affecting trend
People aged 75 and over and people who report their health to be bad or very bad are less likely to visit the outdoors once a week than others (29% and 25% respectively), so changes to the demographics in Scotland may have an influence on the number of people visiting the outdoors.