Background
Radiation refers to the transmission of energy through the environment. Ionising radiation are those forms of radiation which are capable of creating positive or negative charges in the matter that they interact with. Because of the damaging effects of this ionisation on living cells, high levels of ionising radiation have a range of harmful effects on human health including burns, increased incidence of cancers and hereditary disease, as well as radiation sickness in cases of extremely high levels of exposure.

Radiation comes from a wide range of sources, most of which are found naturally in the environment, and is always present in the environment at a low level, known as the background radiation level. Radiation levels become a concern when they rise substantially above background levels. Heightened levels of artificial radiation have occurred during the 20 th century from atmospheric nuclear weapons testing in the 1940s to 1960s, and from the Chernobyl nuclear incident.

Sources of Radiation
The single biggest source of exposure to ionising radiation in Scotland is radon, a naturally produced gas, which is released by the radioactive decay of uranium ore in rocks. Radon itself decays into a radioactive dust that can be inhaled, leading to an increased risk of lung cancer, particularly amongst smokers. Levels of radon vary across the country [84] , depending on the amount of uranium ore in the underlying geology. In buildings where the radon level exceeds the Action Level, this can be mitigated by the installation of ventilation systems to remove radon gas out of buildings. Other important natural sources of radiation are terrestrial gamma rays, cosmic rays, and long-lived radionuclides that enter the body through food and drink. The greatest artificial source of exposure to radiation comes from medical x-rays. Nuclear waste disposals and fall-out account for less than 0.3% of exposure.

Scottish Environment Protection Agency ( SEPA) produce an annual report on the monitoring of radioactivity in food and the environment [85] .

Percentage of annual radiation exposure from all sources 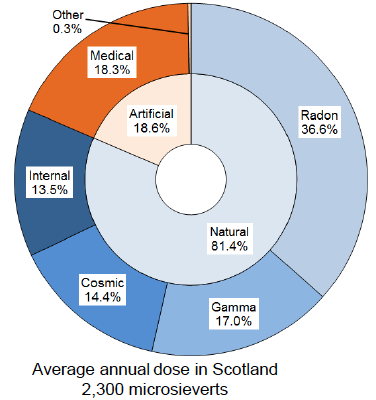 Why this measure is important
Exposure to ionising radiation at very high levels can lead to radiation sickness, but even low-level exposure may be associated with genetic damage that can induce cancer.

Background
The average annual doses of radiation from all sources to an individual living in Scotland is reported by the Centre for Radiation, Chemical and Environmental Hazards ( CRCE), part of Public Health England ( PHE). The values for Radon and gamma rays are specific to Scotland; other figures are assumed to be the same as the UK average values. Values for 2010 are provisional and based on on-going work.

Factors affecting trend
The Chernobyl reactor incident in 1986 caused average annual doses from fall-out (included in the category "Other") to increase by about five times that year. This rapidly declined to baseline levels in later years where it has remained. 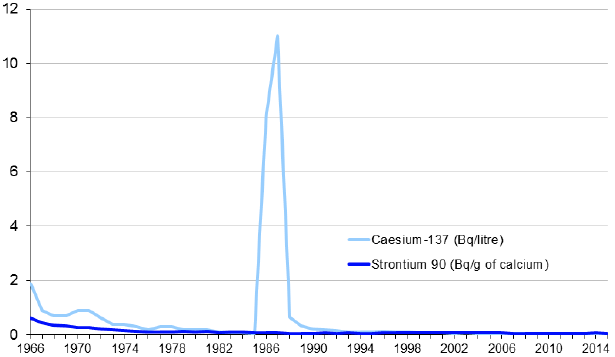 Why this measure is important
Exposure to ionising radiation from radioactive substances can have an impact on human health. For this reason, a number of foodstuffs are monitored each year to assess whether the public has been adequately protected from ionising radiation.

Background
Cows' milk is measured because air-borne radioactivity falling on pasture is taken up by grazing animals and then passes into their milk. This concentrates radioactive materials from the grazing range of the animals, effectively giving a very large surveillance area. Samples of milk are bulked from a number of farms to give the final activity concentration for Scotland.

Trend
From 1966 until 1980, there were gradual falls in the concentrations of Caesium-137 ( 137Cs) and Strontium-90 ( 90Sr) until the concentration was so low it was difficult to detect. This reflects a decline in atmospheric radioactive fall-out, following the ban on above-ground nuclear weapons testing under the 1963 Partial Test Ban Treaty between the UK, USA and former USSR. In 2015, the concentration of 137Cs was below 0.038 Bq/litre and 90Sr was below 0.056 Bq/gram of calcium. However, even at its peak, the 137Cs concentration in milk following the Chernobyl accident was around 100 times lower than the Community Food Intervention Levels, defined by Euratom Regulations EC/3954/87 and EC/2218/89, which were derived to ensure the protection of the public.

Factors affecting trend
Caesium-137 is one of the main radioactive isotopes produced in nuclear reactions, with a half-life of 30 years. Activity levels of caesium-137 in milk peaked sharply following the Chernobyl reactor incident in 1986, with 1987 concentrations 220 times greater than 1985 concentrations. Concentrations then fell rapidly in 1988, and are now below pre-Chernobyl levels. [89]