Background
Biodiversity is the variety of life on Earth. It is the variety within and between all species of plants, animals and microorganisms and the ecosystems in which they live and interact. Although biodiversity is difficult to measure directly, it is estimated that there are around 90,000 species in Scotland.

Importance of biodiversity
Biodiversity is directly related to the provision of environmental services, where a healthy environment provides direct and indirect benefits, such as pollination by insects and carbon sinks from woodland. Scottish Natural Heritage estimates that biodiversity brings a value of almost £17.2 billion to the Scottish Economy [132] . Aspects of biodiversity are also culturally important, with certain iconic species being seen as defining the environment in Scotland, such as red squirrels and capercaillies.

Threats
Biodiversity is threatened by a wide range of factors: development, climate change, habitat destruction, pollution, changing land management and invasive non-native species. In many cases, these are measured in earlier chapters of Key Scottish Environment Statistics, providing an indication of progress. 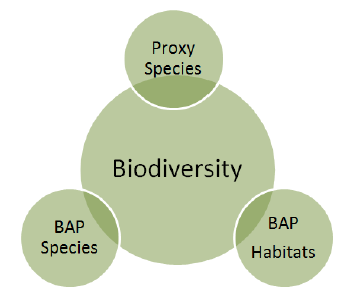 Directly measuring biodiversity would involve taking inventory of all species in an environment, which would be an impractical task. As a result, biodiversity is instead measured by the use of proxy indicators. These are more easily measured traits that are reflective of the overall state of biodiversity.

In addition, efforts are made to directly record priority species that are covered by Biodiversity Action Plans, which form a framework for the conservation of the UK's most at risk species. 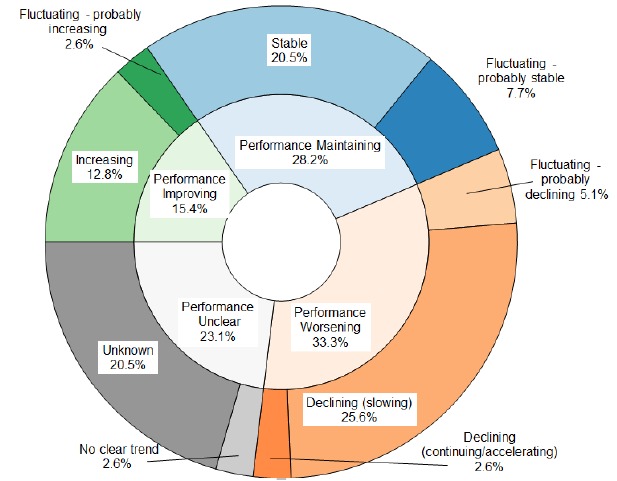 Why this measure is important
Biodiversity refers to the variety of plant and animal life. The conservation and enhancement of our rich and varied natural heritage of plants and animals, habitats and ecosystems, is essential to the quality of our lives and for a sustainable future.

Background
In 1992, the UN Convention on Biological Diversity recognised the need to protect biodiversity. The UK was one of the 150 countries to sign up to the convention, and in 1994, the UK Biodiversity Action Plan ( UK BAP) was launched. The plan aims to conserve and enhance the populations of species and habitats that are considered to be threatened within the UK.

Factors affecting trend
Changes are often associated with land management and atmospheric pollution, although the effects of climate change may become evident in the future. 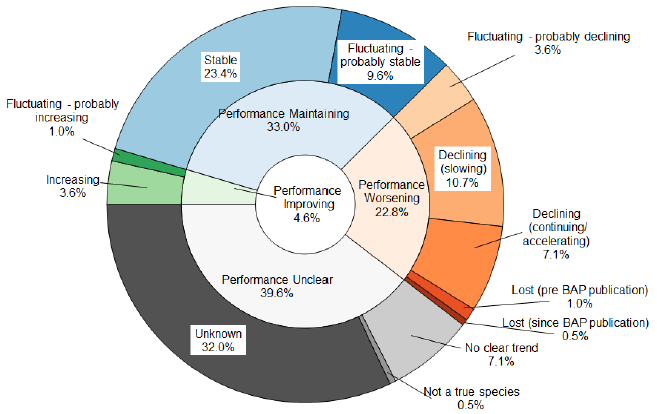 Why this measure is important
In 1994, the UK Biodiversity Action Plan ( BAP) was launched. The action plan aims to conserve and enhance the populations of species and habitats that are considered threatened in the UK.

Trend
In the 2008 assessment for Scotland, 38% of the priority species were increasing or stable and 21% were in decline. For the remainder of the species considered, 7% showed no clear trend, 32% had an unknown trend, one species (Wryneck) had been lost since the commencement of BAP in 1994, 2 had been lost pre BAP and 1 (scurvy grass) was no longer considered a true species. 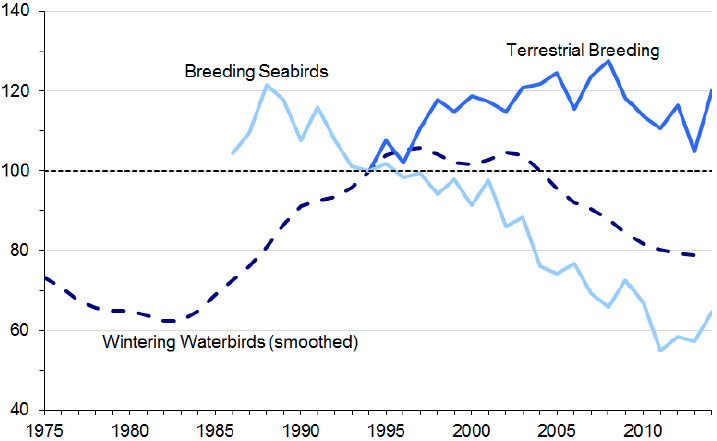 Why this measure is important
Bird populations are diverse and easy to monitor. They are sensitive to changes in the wider environment and therefore can provide an indication of the state of biodiversity in Scotland's habitats.

Factors affecting trend
The status of wild bird populations can vary greatly from year to year. The abundance of birds may be affected by many factors such as the weather, changes to habitats and changes in the abundance of food sources. 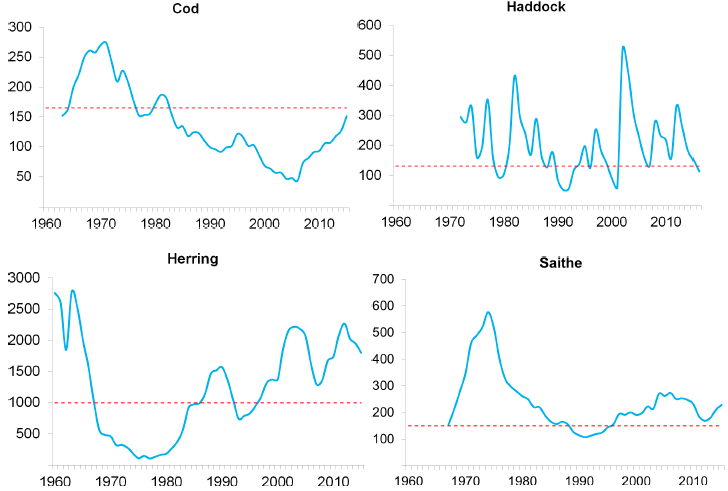 Why this measure is important
If fish stocks are in a poor state it can have a knock-on effect on other parts of the marine ecosystem. The state of commercial fish stocks may be considered, alongside other indicators, as a proxy for the general sustainability of the marine environment.

Background
One measure of the state of a fish stock is the size of its spawning stock biomass ( SSB). The health of the fish stock can then be indicated by comparing the SSB with a precautionary value, or reference point (Bpa). [144] Data for haddock are provisional [145] .

Factors affecting trend
The size of these fish stocks are affected by several factors, including commercial fishing and other factors such as climate change and success of recruitment (the number of young fish entering the adult population each year). 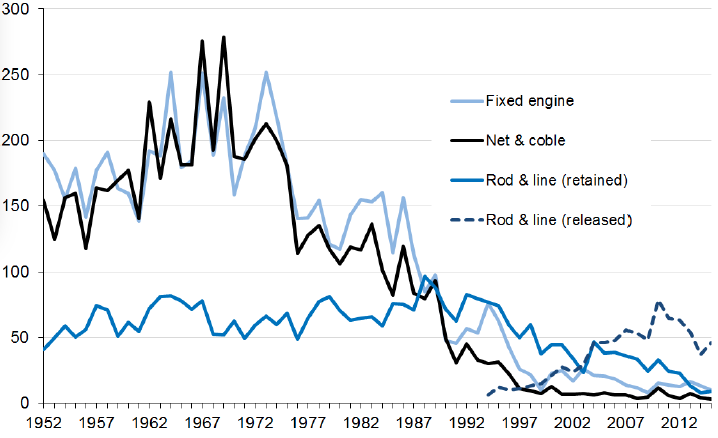 Why this measure is important
The salmon fishing industry is a significant economic and leisure resource in rural Scotland and so protecting this resource through sustainable management practices is of great importance. Climate change, water pollution, predation and disease may affect populations.

Background
Data are obtained from Marine Scotland and are based on returns from proprietors, occupiers or agents of salmon fisheries throughout Scotland.

Factors affecting trend
Yearly variations in weather, timing of runs and fishing effort can affect catch sizes; and so a difference in catch does not necessarily indicate a difference in the abundance of the stock that provides the catch. In addition, a proportion of fish released from the rod fishery may be re-caught and so inflate the catch statistics by being reported more than once.