Background
Land is an important part of the Scottish environment, supporting a range of habitats and species and providing a wealth of benefits such as food, timber, clean water, energy and employment. The way in which land is used and managed has implications for many areas such as water pollution, greenhouse gas emissions, human health and the economy; and is vital to the sustainability of the environment as a whole [96] . 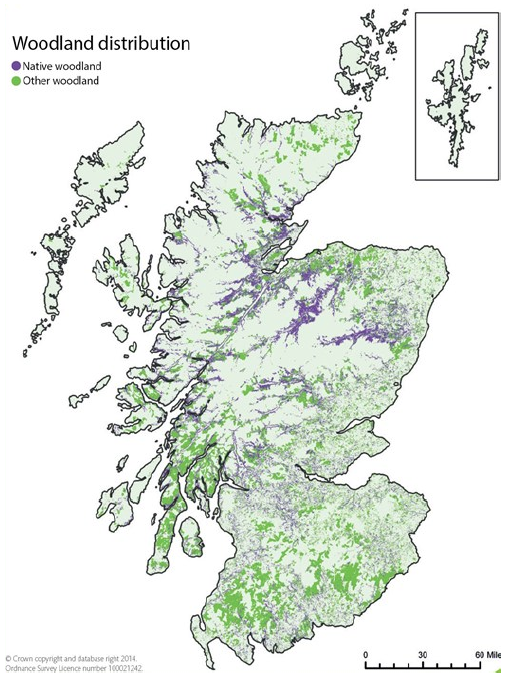 One of the outcomes of the Scottish Government Greener Objective [99] is to protect and enhance the natural environment. The Land Use Strategy 2016-2021 [100] , which is one of the commitments of the Climate Change (Scotland) Act 2009, builds upon the previous land use strategy and provides a set of Principles for Sustainable Land Use to guide policy and decision making in relation to land use.

As at 31 March 2016, 56% of Scotland's woodland area was certified as sustainably managed (807,000 hectares) [101] , although woodland that is not certified may also be managed sustainably.

There are two National Indicators that relate to Scotland's land:

The Land Use Strategy also has ten indicators that measure progress towards the delivery of the three Objectives of the Strategy [104] . 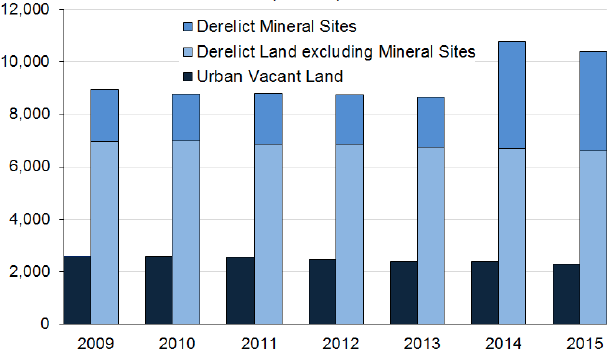 Why this measure is important
Derelict land together with vacant land in urban areas is an unused resource. Vacant land is land that is unused for the purposes for which it is held and is viewed as an appropriate site for development. Derelict land (and buildings) is land that has been so damaged by development that it is incapable of being developed for beneficial use without rehabilitation [106] .

Background
The Scottish Vacant and Derelict Land Survey is an annual data collection managed by the Scottish Government using data sourced from local authorities and the Loch Lomond and Trossachs National Park Authority. The main purpose of the survey is to provide a national data source to inform the programming of the rehabilitation, planning and reuse of derelict and urban vacant sites. 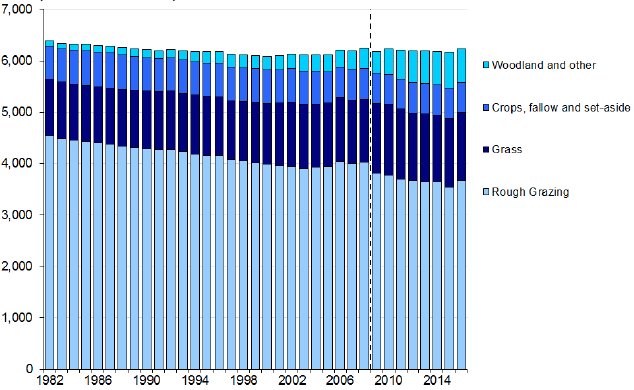 Why this measure is important
Agricultural land use has a strong influence on the landscape and environment of Scotland. In particular, changes in agricultural land use have an impact on wildlife habitats, water pollution, and greenhouse gas emissions. Approximately four fifths of Scotland's land is used for agriculture, although this may also be used for other purposes [108] .

Background
There is a step change in the agricultural land use data series in 2009 following a switch in data source to the Single Application Form ( SAF). [109] This means that post 2009 data is not directly comparable to previous years and so trends should be treated with caution [110] .

Factors affecting trend
Though the area of woodland fell in the year to 2016, changes to the ways in which woodland was collected on the SAF in 2015 and 2016 may be a large factor in this fall and therefore the data for these years should be treated with caution. There has been a general upward trend in woodland over the last decade, however. While this may be partly due to increased coverage of this type of land by the June Census register, particularly in the years immediately following the use of SAF data from 2009, consistent increases over the last couple of decades suggests genuine increases have been driving this trend. 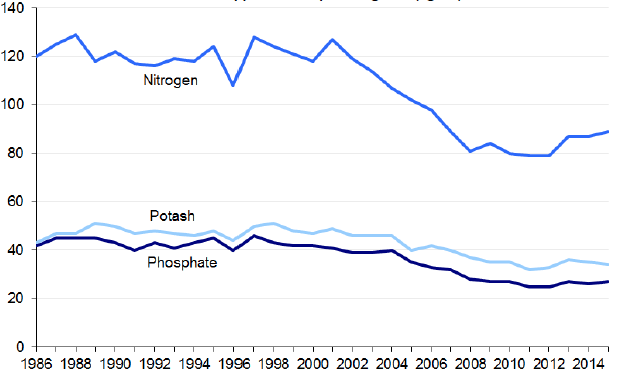 Why this measure is important
Fertilisers contain nutrients, such as nitrogen, phosphorus and potassium, which improve plant growth and crop yields. However, the inappropriate or mistimed use of fertilisers may cause nutrient enrichment and eutrophication of waters.

Background
Data on manufactured fertilizer [113] use is obtained from the British Survey of Fertiliser Practice, which is an annual survey based on a representative sample of farms which vary from year to year. The survey includes estimated average rates of manufactured fertiliser nitrogen, phosphate and potash applied to agricultural crops and grassland, excluding Orkney, Shetland and the Western Isles.

Factors affecting trend
The application rates for nitrogen are generally higher than those for phosphate and potash. Most agricultural soils do not contain enough naturally occurring plant available nitrogen and so need to be supplemented at certain times of year. Phosphate and potash can be held in large quantities by most British soils and so managing the supply of these is based more on maintaining appropriate levels in the soil. Weather, economic factors, subsidy regimes and cropping patterns all may contribute to changes in fertiliser use. 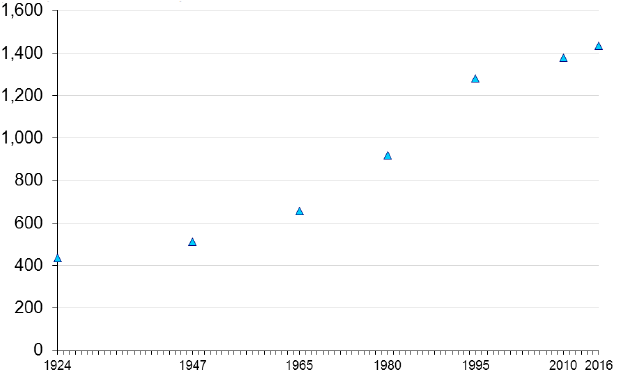 Why this measure is important
Woodland is important as it provides wildlife habitats and can contribute to the sustainable production of wood products and paper. Woodland also contributes to the removal of carbon dioxide from the atmosphere, with the Forestry sector acting as a carbon sink.

Background
Data are obtained from forest inventories; however, most inventories have slightly different definitions of woodland and so some apparent changes in area over time are due to changing definitions. Data for 2016, as at 31 March, are the final results obtained from 'Forestry Statistics 2016'.

Factors affecting trend
Increases in woodland area are mainly the result of new planting, which has increased in recent years due to the introduction of Scottish Rural Development Contracts, or by natural colonisation of trees on land near existing woodland. Decreases in woodland area can result from the conversion of woodland to other land uses. Regulatory approval, which normally requires the area to be restocked[115], is usually required before trees can be felled. However, trees may be permanently removed in some cases, generally for environmental reasons. The permanent removal of trees may also be authorised under planning regulations, to enable development.