Background
The legal protection of habitats, species, buildings and archaeological sites plays a part in securing their future through preventing damage, destruction or inappropriate exploitation. 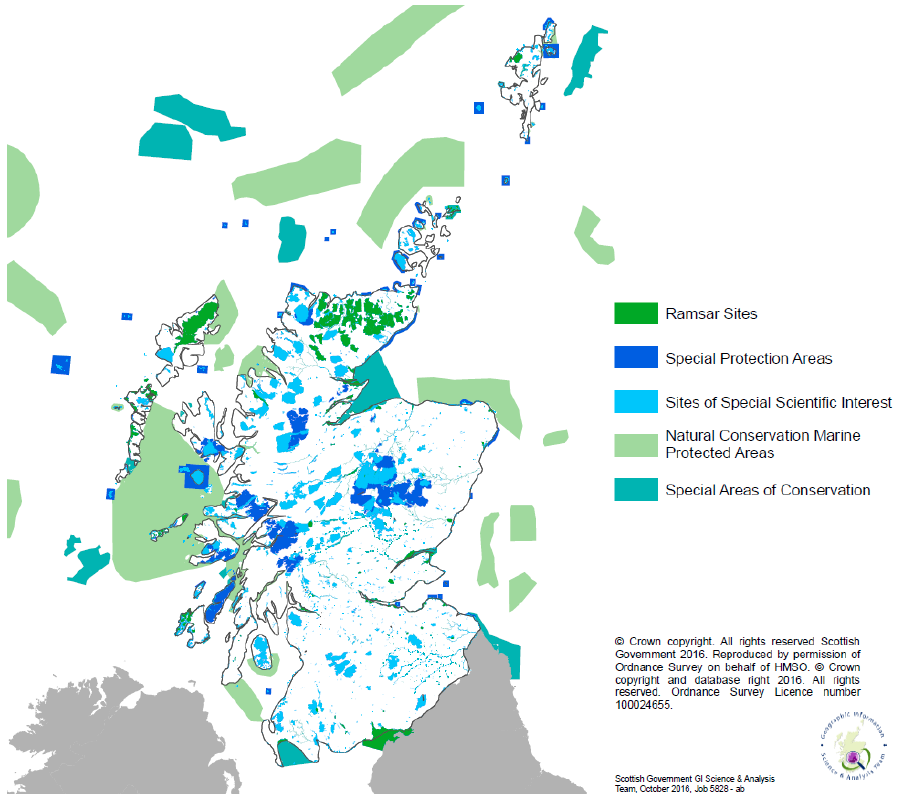 The map above shows the area of many designated nature conservation areas in Scotland. There are also additional areas outwith the area shown on the map (65% of Special Areas of Conservation and 71% of Nature Conservation Marine Protected Areas are located outside the area pictured). Further information on marine conservation areas can be found on Marine Scotland's National Marine Plan Interactive site [116] . 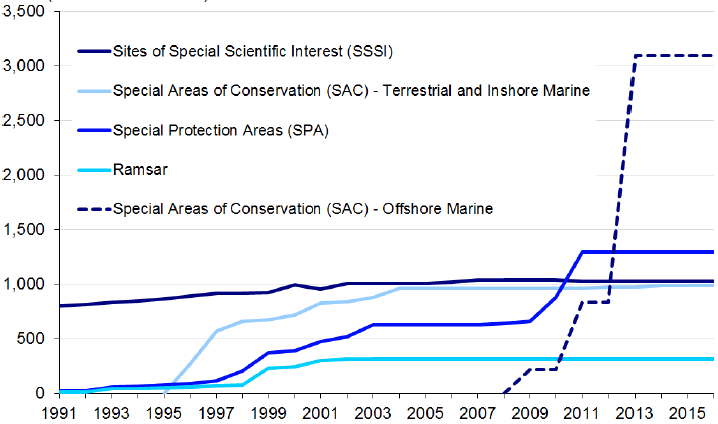 Why this measure is important
Designated areas provide protection for areas of cultural or biological importance.

Factors affecting trend
In 2009, Scottish Ministers classified 31 marine extensions to existing seabird breeding colony SPAs around Scotland's coasts and classified six new SPAs for golden eagle in 2010, which contributed to the large increase in SPA area of 639,387 ha between 2009 and 2011. The increase of 2,082,000 ha in the area of offshore SACs from 2012 was mainly due to the submission of the SAC at Hatton Bank, which covers 1,569,000 ha.

Number and area of sites designated as Scheduled Monuments 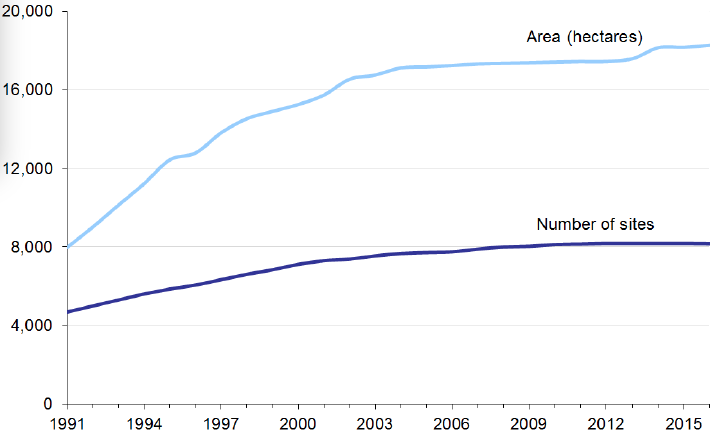 Why this measure is important
Historic Environment Scotland is the lead public body set up to investigate, care for and promote Scotland's historic environment. One way it does this is by legally protecting nationally important sites and monuments through designation as 'scheduled monuments'.

Background
Scheduled monuments ( SMs) are protected under the Ancient Monuments and Archaeological Areas Act 1979 [125] . Once a monument is scheduled, the prior written consent of Scottish Ministers is required for most works or activities in the scheduled area to help ensure the monument is not damaged or destroyed - this process is known as 'scheduled monument consent'. Further information on scheduled monuments is available from Historic Environment Scotland. [126]

Trend
The number of SMs has increased by 74% between 1991 and 2016 and the area they account for has increased by 129% over the same period. In 2016, there were 8,167 designated SMs in Scotland, covering an area of 18,285 hectares (ha). There are also 7 historic Marine Protected Areas, covering 87 ha, that have been designated to protect marine historic assets such as historic shipwrecks.

Factors affecting trend
There are SMs spread across Scotland but numbers vary across local authorities. Recent changes may be due to an on-going review of SMs [127] , which may involve the rescheduling, or rationalisation of some sites. Other changes may relate to a review of dual designated sites. [128] Historic Environment Scotland can also add, amend and remove a small number of designated sites in response to external requests to review sites or through day-to-day work in relation to the maintenance of the schedule and list.

Percentage of natural features on protected sites in favourable condition: 2007-2016 [129] 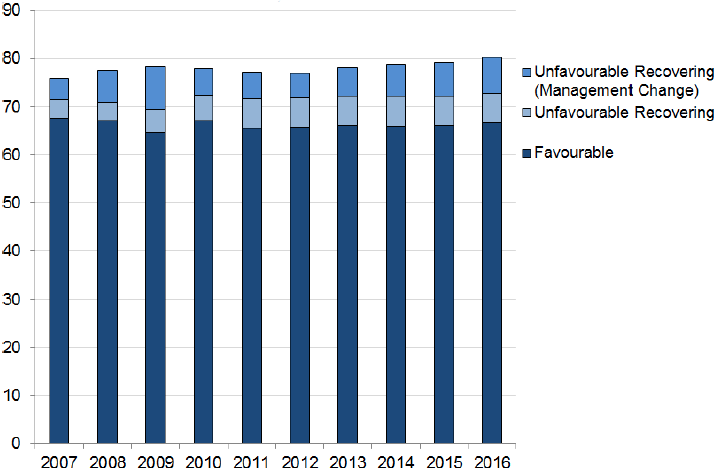 Why this measure is important
Scotland's protected sites have been identified as areas with 'special' species, habitats, natural rocks or landforms, or a combination of these. Protecting these areas is important for maintaining sensitive or biologically important natural features and makes a key contribution to safeguarding Scotland's biodiversity.

Factors affecting trend
This trend can be affected by the actions of the responsible bodies, landowners and users of individual protected sites. Many natural features assessed as unfavourable need specific, and sometimes complex, collaborative actions (e.g. management of wild deer populations) to bring them into favourable condition. Influences from outside the protected site itself, for example climate change, can also influence the condition of individual sites.