12 The impact on Scotland

During the study it has become clear that if current applications proceed the chance of non-exposure to wind farms for visitors travelling from the South is almost non-existent as all the relevant trunk roads, particularly the M74. will have substantial wind farm exposure (see section 11.5). It thus seems likely that although the effects of general aversion to Scotland caused by wind farms are very small the number of tourists affected by wind farm exposure will be very large. In section 12.2 we estimate the number of tourists who will be affected and the resulting change in likelihood of return.

The impact of a reduction in scenic value is even more difficult to ascertain. Again it is clear that there will be a small reduction in expenditure in accommodation seriously affected. On the other hand in other unaffected locations, prices may rise as unaffected scenes decrease in number. Equally the expenditure for the vast majority who continue to come to Scotland may simply be re-allocated. At a national level it seems likely that any negative effect, if it exists, will be extremely small, difficult to identify and swamped by factors such as exchange rates and poor weather experiences. No attempt is made therefore to estimate an accommodation impact at the Scottish level.

12.2 The number of tourists in Scotland affected

It is clear that certain groups are likely to be totally unaffected:

Table 12-1 provides estimates of these groups based on Table 5.2, Fig 5.2 and the VisitScotland profiles

The conclusion is that just over 30% of tourists could be affected by a reduction in likelihood of return.

The intercept survey provides an estimate of the reduction in likelihood of returning to Scotland (for non Scots) because of the adverse effects of wind farms of 0.62% (0.38% of all tourists). Thus the predicted impact on the whole of Scotland is of the order of a reduction of 0.18% of tourist spending and consequently jobs.

12.3 Economic impact of wind farms in Scotland as a whole

Figure 12-1gives the results of the DREAM® model for Scotland as a whole of a reduction of 0.18% in tourist expenditure. Note that day trippers are assumed to be Scots who will continue to spend equivalently within Scotland. The expenditure will not necessarily be on the same activities or in the same areas. 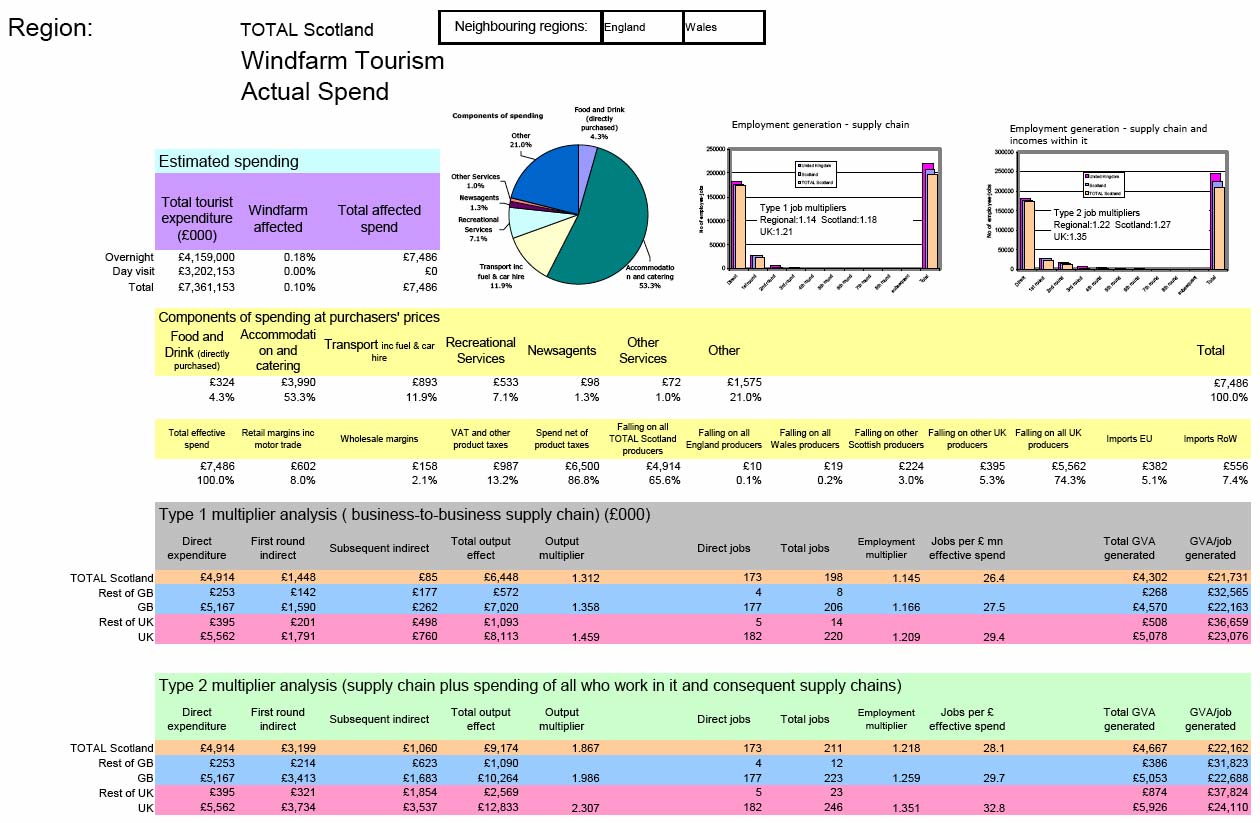 A fall in expenditure of 0.18% leads to a fall in expenditure £7.6m. Some 4.9m of this applies to Scottish producers. This expenditure, in turn, causes a reduction in output of £1.45m within Scotland via the indirect effects and £1.65m through induced effects. The decrease in output is associated with a total fall in employment of 211 and of £4.7m in gross value added (income and profits).

12.4 Estimation of upper and lower bounds

The estimate of 0.18% is subject to considerable uncertainty. The intercept study identified 5 respondents (2.7% of visitors interviewed) whose likelihood of returning to Scotland would be affected by the extended presence of wind farms. Within these 5 the responses range from a positive 15% to a negative 70% change in likelihood with a mean of 22.8%.

Two areas of uncertainty arise. First there is the uncertainty associated with actually selecting an individual. The standard error of that likelihood is given by

Using this expression gives an upper bound of

Within the five chosen there is also a standard error of the mean given by the normal formula and an upper bound of -38%. Consequently the overall upper bound for those affected is given by 1.67%. Overall therefore the upper bound of the estimate is a loss of 0.5% of tourist expenditure.

The basic impact model is linear consequently this could suggest an estimate of the upper bound is a reduction of 630 employees. However, as stated earlier, because we took a worst case scenario and believe that there is a protest element in the responses we believe that the 211 jobs is actually the upper bound.

The lower bound includes zero i.e. at a purely statistical level we could not prove that the change is significantly different from zero. Given the significant loss of value shown in the internet survey, however, we would regard any attempt to claim there is no impact to be misleading. Our best guess is of the order of 200 jobs which is extremely small in an industry the size of tourism

The study suggests a small negative impact on the economy of Scotland that is estimated to amount to some 211 jobs and income of £4.7m. Whilst most of these will be in Tourism related industries, jobs and income in other industries will be lost due to the indirect and induced effects. Because of the low number of respondents who report a possible response in the intercept survey and the large range of those responses this estimate is subject to considerable uncertainty. The balance with the expected year on year employment on wind farms in Scotland would be interesting.