8.1 The Importance of Tourism in the Local Economy

One issue has dominated the economic trajectory of Caithness and Sutherland since the Clearances, and it is summarised in Figure 8-1 and Figure 8-2

Figure 8-2 Population Change and the Impact of Dounreay

The population today is estimated to be 40 per cent higher than it would have been without the Dounreay research establishment and power station. Because atomic scientists are well-paid, and the people that clear up after them have to be skilled and conscientious, incomes over the last half century have been boosted even more. GVA is a little over £0.5 bn.

Greening this brownest of Scotland's fields - ameliorating the decommissioning of the facility - is likely to be the most significant factor in the local economy for at least a decade. As a new source of income, renewable energy is an attractive new industry. In the long run onshore wind and hydro may be augmented by other forms of renewables, and other emerging technologies should become more able to play a growing role - for example, the Pentland Firth holds great potential for tidal energy extraction and Scotland's coastline has extensive exposure to wave resources in particular but the new technologies are not yet commercially proven or available in significant quantities. In the short term onshore wind technology is readily available and wind farms are already well established. Offshore wind technology needs to evolve to be able to be deployed in significant amount in the deep water which surrounds Scotland's coast.

The Herculean task of wider economic regeneration is being tackled by local people and by government, which is trying out new organisational forms for economic development. Some distinctive manufacturing experiments, like Caithness Glass and Norfrost freezers, are no more - or at best much reduced or moved elsewhere. Some sophisticated engineering remains, most associated with Dounreay or its decommissioning, but some linked into the North Sea and other oil or energy markets,

When the regenerators select 'industrial stars', sectors where the region has a higher-than-average market share and growth prospects are good, then tourism easily heads the private sector list. Hotels and catering alone account for 5 per cent of GVA in the region and employ over 1700 people out of a workforce of 16000 (10.6%). Tourism as a whole (including associated services, tourism retailing, transport and so on) constitutes about 7 per cent of the local economy.

Local agriculture and fishing are a major competitive strength, two of only four industries with a significant trade surplus for the region. Attempts are being made to add value through processing and branding the products.

However, nuclear demolition and associated technical functions apart, the rest of the economy is thin, so local multipliers are not large. Retailing is almost exactly the GB average, and other distributive trades are just above half the average. Services are most often acquired from Inverness and the Central Belt and goods, apart from local food, from England and abroad. Any adverse effect on tourism must, therefore, be taken extremely seriously, as there is little chance of substitution within the local economy. The concentration of renewable energy to Caithness and ensuring that the more scenic "wilderness" areas of Sutherland are preserved thus appears to be an appropriate strategy.

8.3 Wind farms in the landscape 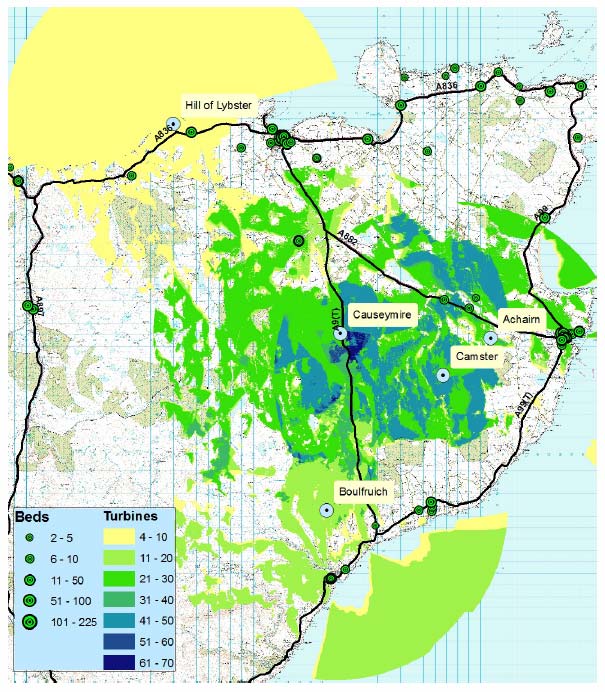 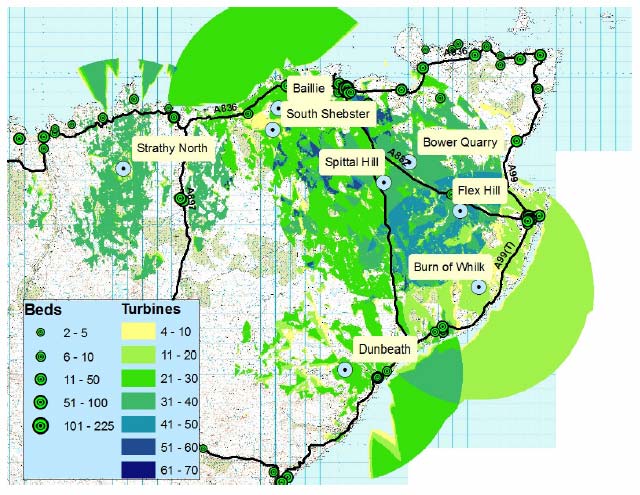 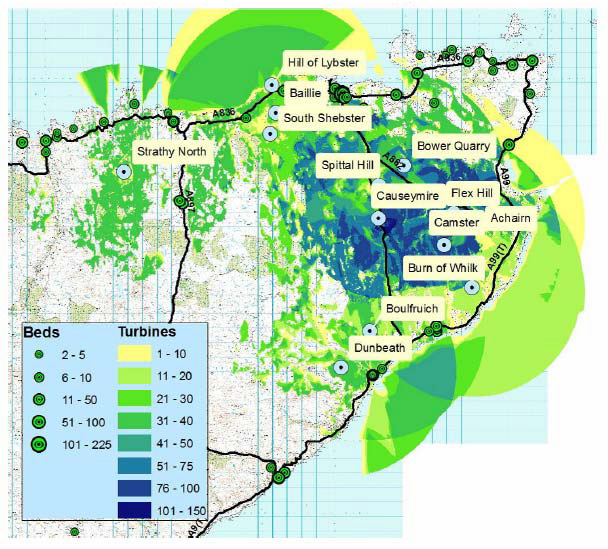 These roads constitute the majority of the main road network in Caithness.

The HIE estimate that in 2003 there were just over 1m bednights in Caithness and Sutherland. Using the business to holiday and bednight to trip ratios for the Highland Region as a whole it is estimated that there were around 165,000 holiday trips or some 75,000 tourist vehicles in Caithness and Sutherland. Many of these vehicles will be "picked up" by traffic counters at a number of spots e.g. most vehicles coming into Thurso from the west will have been counted either at Invershin or on the road to Ullapool. Figure 8-6 provides a schematic diagram of the major road flows

Finally holiday makers only constitute 75% of tourists as defined by VisitScotland. As a consequence it is estimated that only 60% of tourists will be affected.

Figure 8-3 shows that settlements and consequently accommodation tends to be located along the coast whilst the wind farms lie in the agricultural areas in central Caithness. The effect is that planning policy has meant relatively few units are affected. Table 8-3 shows the numbers of rooms, affected and the total. We have then assumed that room location in the hotel and screening halves the total of rooms affected.

On the basis that all pending applications will be granted this implies that 4.9% of rooms are likely to face a decline in price due to poorer scenic quality.

The internet study suggests a reduction of expenditure of 2.54% might be expected from tourists. Consequently, taking into account those unaffected because of location or activity we obtain an overall fall in the area of 1.54% as shown in Table 8-4.

The fall of 1.54% is equivalent to a fall of £1.8m in the Caithness and Sutherland Enterprise area.

Figure 7-3 shows the DREAM® output associated with a fall of this size in the area. 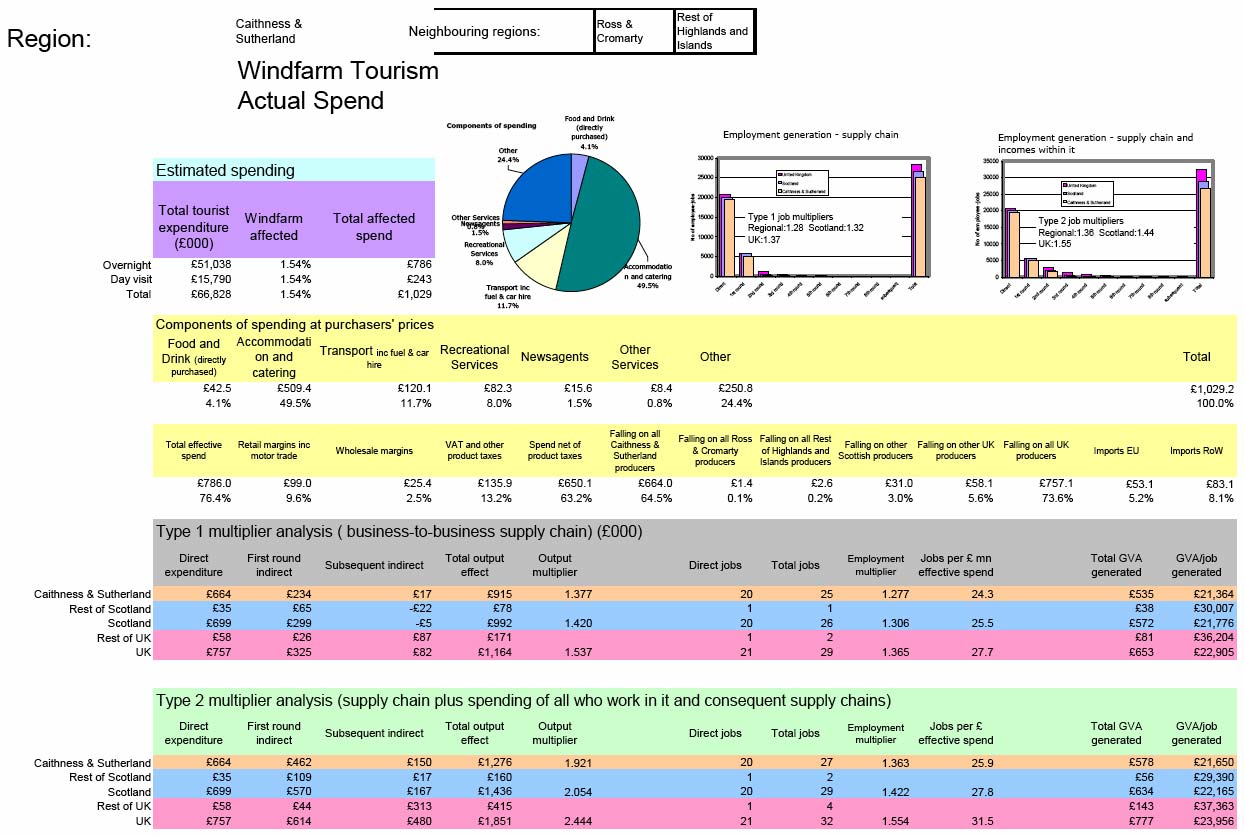 Because of the limited size of the economy of the area 84% of that expenditure departs immediately. The indirect and induced more than doubles the remainder to give a total output effect of £1,276,000 which equates to some 27 jobs and a decrease in GVA of £578,000.

The impact of the drop in accommodation is extremely small. The internet study suggests that, at worst, we might expect a fall of 18% in value and consequently prices and expenditure. Given only 4.9% (50% of the 9.8% affected) of the rooms face that loss we would expect a fall in expenditure on accommodation in the region of £114,000. The result of this extremely small fall is given in Figure 8-8.

Our analysis suggests that 3 full time equivalent jobs would be lost with a drop in income of the order of £87,000. 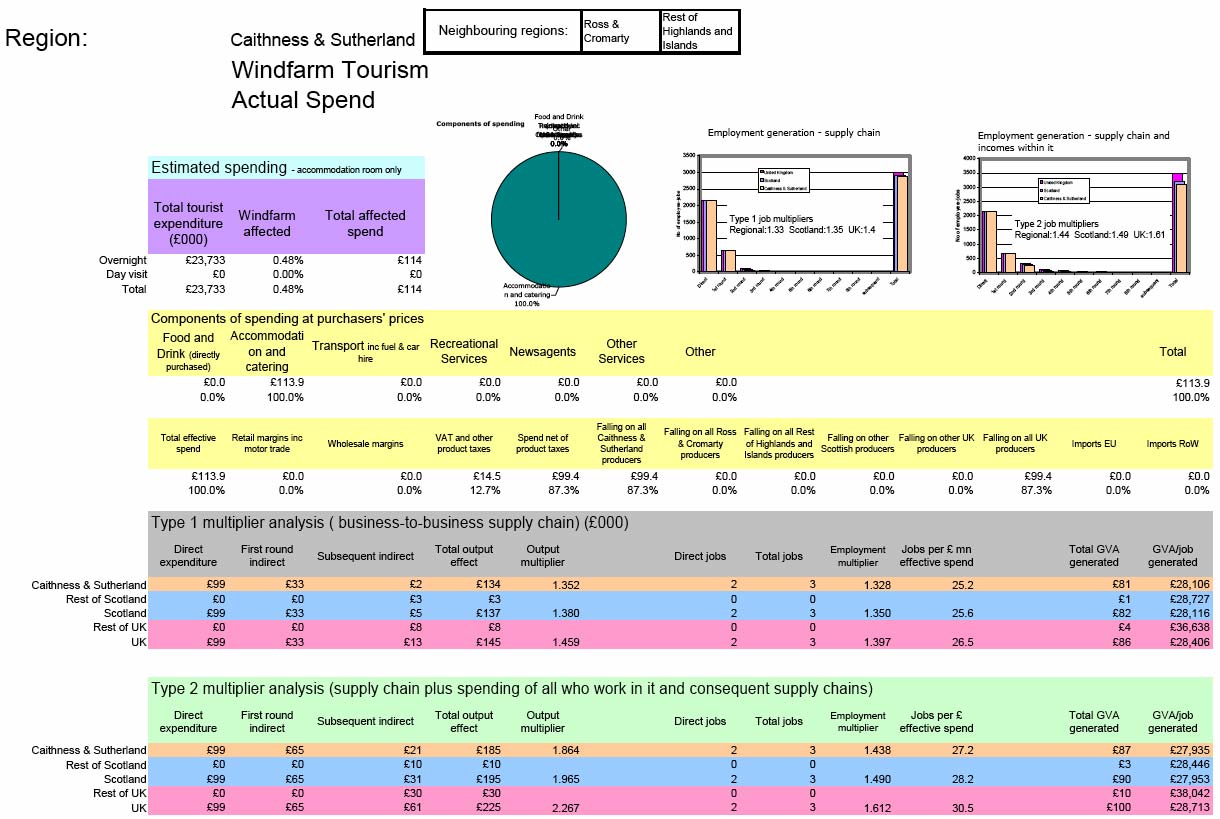 However the number of tourists is small and consequently in absolute terms the loss of employment and income is small, certainly less than the full time jobs in the wind farm industry. We believe it will not exceed 30 jobs in total, probably less, considerably fewer than might be expected from the emerging renewables industry.