11.1 The importance of tourism in the local economy

With the closure of Chapelcross, Dumfries and Galloway ended a sixty year relationship with the nuclear industry and electricity generated now comes from wood, water and wind.

Dumfries and Annan still have some significant chemicals and engineering businesses rooted in military and maritime history, but the region's main industrial clusters now draw their strength from the location and the land.

Forestry and agriculture shape the landscape, and the latter shapes much of society, as was seen when the region bore the brunt of Scotland's foot and mouth disease in 2001. The UK's most efficient sawmill and Britain's biggest woodburning power station are both leading edge parts of the forest cluster, and there is still meat and fish processing, as well as cheese and ice cream making, to add value to primary food products.

Total GVA is £1.8 bn, of which 4.2 per cent derives from the hospitality industries. They are, after agriculture, now the leading industries and tourism spending is £330 mn, more than half of it from day trippers. This makes tourism the leading private sector cluster. It includes tourist brides and grooms at Gretna (marriages in Dumfries and Galloway exceed those in Glasgow, Edinburgh and Aberdeen put together, and many are second-timers from England). It embraces travellers busily heading up the M74 towards Glasgow and along the A75 to Belfast, and yachtsmen lazily cruising into Kirkcudbright. It includes the mountain bikers making big air through the forests on the 7 Stanes, and the bookworms browsing bigger words in Wigtown.

And as well as bringing visitors in for the day or a week, it motivates many folk to embark on the last and longest holiday of their life in the region, albeit not strictly 'tourism'. Dumfries and Galloway has by far the highest in-migration of over 50s in Scotland (again, mainly from England). Many retirees and near retirees say they first visited the region on holiday, and at times when English house prices are booming, but Scottish ones less buoyant, they sell up in Manchester or Merseyside and move across the border. Figure 11-1 shows the forecast age and gender profile.

As people in the region grow older the area will have to expand its health and social work provision so that these become even more leading activities. It will also need to find funds to expand its (higher) education provision if it is to stop haemorrhaging almost all its teenagers to the cities.

The growth in service demand from the elderly suggests that any decline in the tourist sector will have little effect as hospitality services simply move to another set of clients.

11.3 Wind farms in the landscape 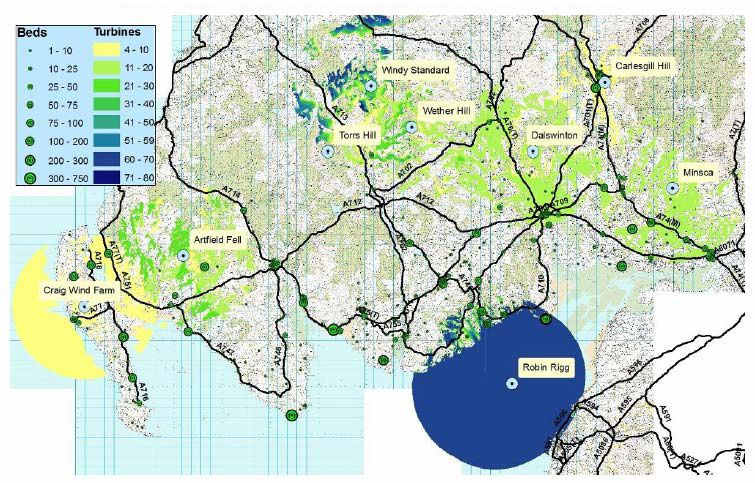 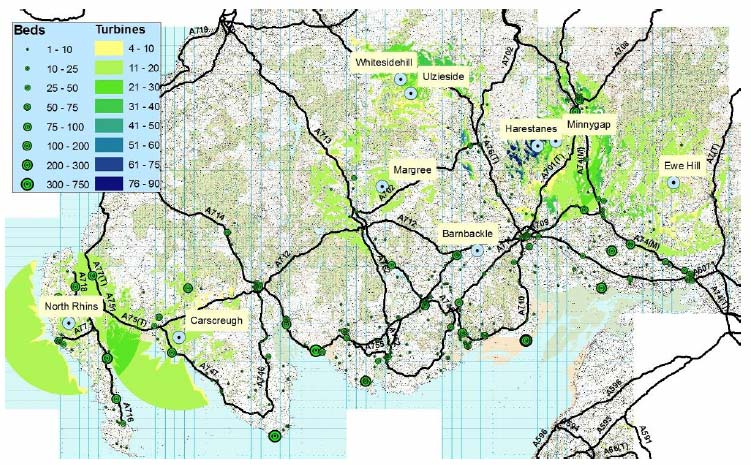 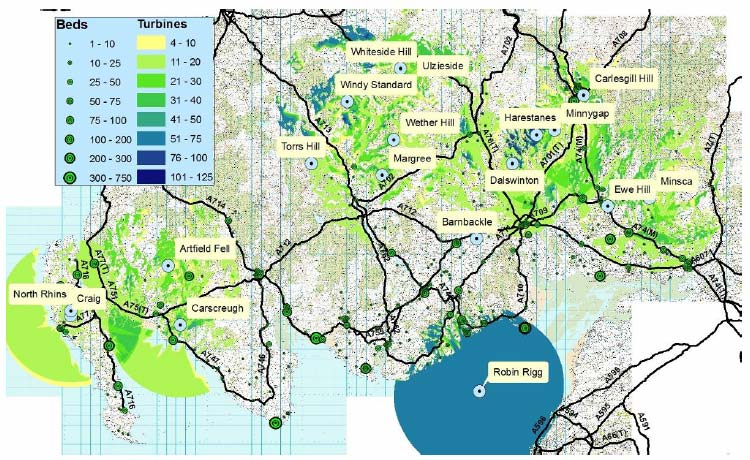 Figure 11-4 and Table 8-1 indicate extensive exposure over prolonged lengths of road. The unaffected areas are the Forest Park and most of Kirkcudbrightshire, both important for tourism but the Robin Rigg development impinges on the other major tourist area, the Solway Coast.

The 2.7m tourist vehicles on the M74 are estimated to include some 1m Scottish vehicles going or coming home from their holidays leaving a Tourist flow of 1.7m. Figure 11-6 shows the distribution and the dominance of the motorway as the entry point to Scotland

Visit Scotland suggest around 1m bednights in the area of which 300,000 are Scottish,. On the basis of vehicle counts the number of long stay visitors would not appear to exceed 400,000, with the balance of 300,000 being English/Irish short stay. This apparently high figure is between 5 and 10% of those on the M74 depending upon if the short stay is 1 or 2 nights. Of the 300,000 Scots a significant number will also be short stay.

Possibly the least exposed road in the area is the A77 and tourists staying in Girvan, Ballantrae or around Wigtown Bay could conceivably be unaffected. Of course that assumes that they are able to distinguish between Dumfries and Galloway and the huge developments on the A77 just north on Fenwick Moor. For estimation purposes we assume 98% of holidaymakers in the area are exposed. In chapter 7 it was found that some 69% of tourists are holiday makers. Thus we might anticipate any reduction to apply to 69% of tourist expenditure in the area.

Table 11-3 shows that almost one quarter of businesses and one third of rooms will have exposure to wind farm development. A substantial number of the latter relate to the caravan parks on the Solway Coast.

Utilising the normal assumption we assume there will be a drop in value and price on 16.2% of the accommodation.

The economic impact in Dumfries and Galloway is given in fig 11.7 and fig 11.8. When indirect and induced effects are deducted, the initial fall in general expenditure of £6.18m results in a fall in employment of just over 200, and a drop on regional income of just under £3m. The low wage level in tourism in this area is particularly noticeable.

As noted earlier the percentage off accommodation affected in Dumfries and Galloway is relatively high because of the impact of the Robin Rigg offshore farm on resorts on the Solway Coast. The fall in direct expenditure is put at around £1.6m leading to an eventual decline in income of £1m and 77 jobs. 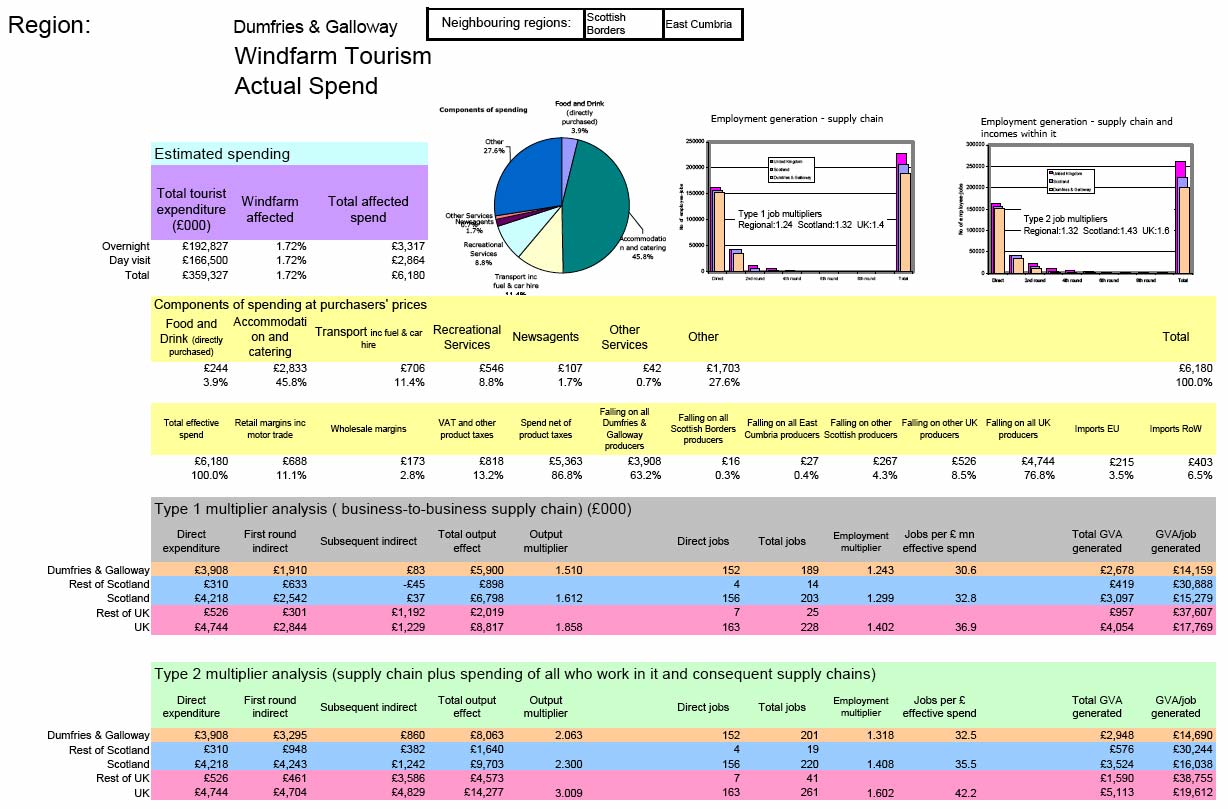 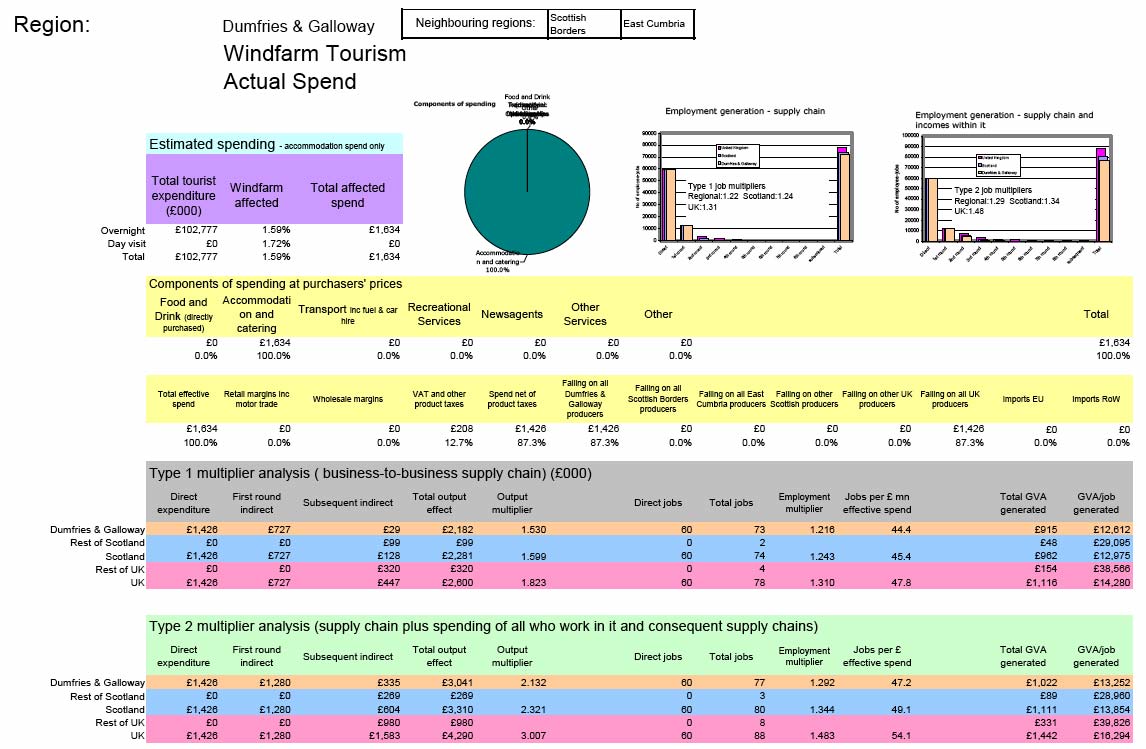