9.1 The Importance of Tourism in the Local Economy

Located in the centre of Scotland, Perth, Kinross and Stirling service, and are serviced by, all regions of Scotland. In Perth and Kinross 21 per cent of household income is brought home by out-of-district commuters and in Stirling 35 per cent, high figures for places that do not abut major cities. The excellent rail connections are one reason.

The GVA generated annually within the two regions totals £3.2 bn, of which £153 mn, or 4.8 per cent, comes from hospitality industries. Direct tourism GVA is thus about 6.5 per cent, or £200 mn. Estimated tourism revenues are £380 mn in Perth and Kinross and £280 mn in Stirling. Tourist-attracting and serving industries are about 40 per cent bigger in Perth, Kinross and Stirling, than in a typical UK subregional economy, and so qualify for the top twenty 'most distinctive' industries. Only Argyll, Highland and Dumfries and Galloway have more tourism bedspaces per head of population.

As regards other distinctive industries, the area is one of the forest product centres of the UK, not only growing the trees but adding value to them by making wood products. Forest recreation is a major attraction to both overnight tourists and day visitors. Meat processing and farm machinery are other major land-based industries, and the mineral industry (and originally glass) exploit land resources. The region has a number of distinctive water-based industries, from Highland Spring to drinking water supply, aquaculture (and its research and regulation) and hydroelectricity generation. Recreational fishing is a water-based tourism activity.

The area is particularly important scenically; six of the forty National Scenic Areas lie wholly or in part in the region as shown in Table 9-1

In the west of the area the Loch Lomond NSA is incorporated in the Loch Lomond and the Trossachs national park which attracts both substantial numbers of day visitors from the central belt but also large numbers of overnight "tourists". As might be expected in addition to Perth and Stirling, the area hosts a number of villages and small towns that attract the tourist: including Callendar, Aberfoyle, Dunkeld, Pitlochry, Aberfeldy Kenmore and Killin. Any significant reduction in tourism will affect these settlements substantially. Unlike Sutherland, however, there are alternatives and one would expect substitute employment to occur. The economy of the area cannot be described as fragile.

Table 9-2 gives details on the wind farms that have been approved and are constructed or in the process of being constructed. Although Griffin is by far the largest of them as will be seen from the next section it would be less visible and be seen by far fewer tourists than the Braes of Doune.

9.3 Wind farms in the landscape

Figure 9-2, Figure 9-3 and Figure 9-4 illustrate the exposure of each area to approved, applied for and both wind turbines Also on the map are the key roads and the VisitScotland registered accommodation. Together this allows the assessment of the percentage of tourists that can currently see four or more turbines within 15km and the number that will be able to seen should all applications succeed and there are no further developments . It should be emphasised that neither is likely. 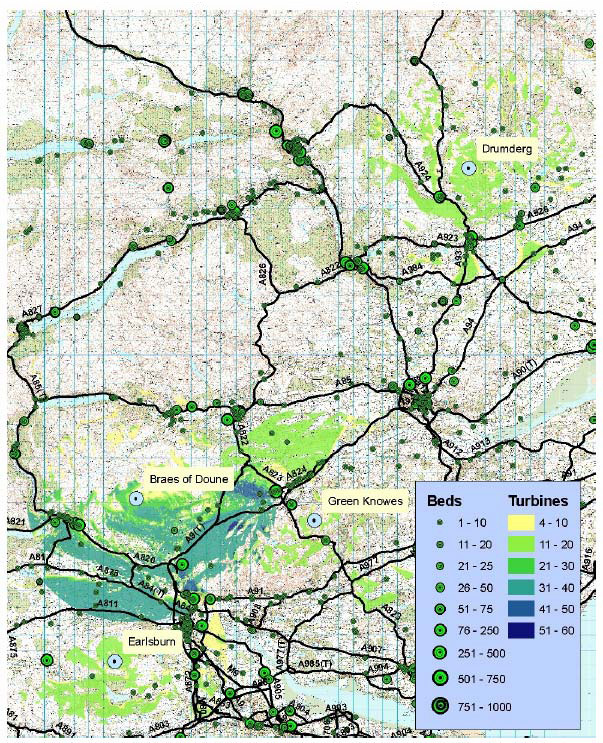 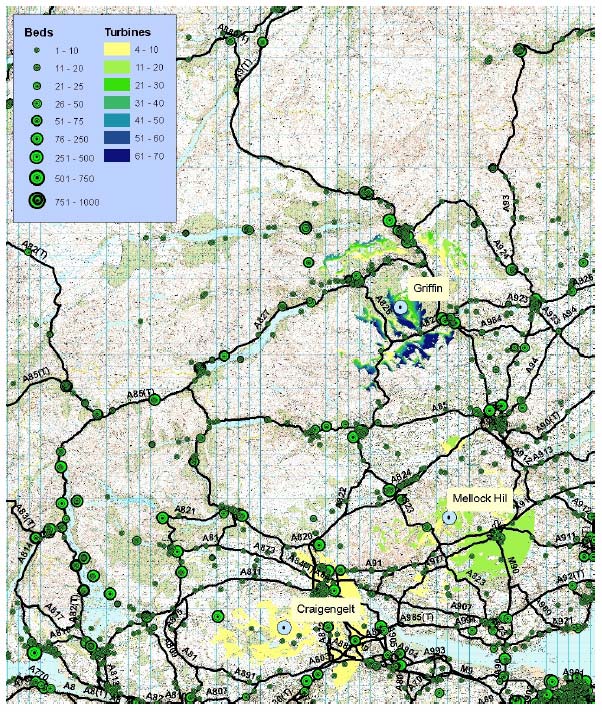 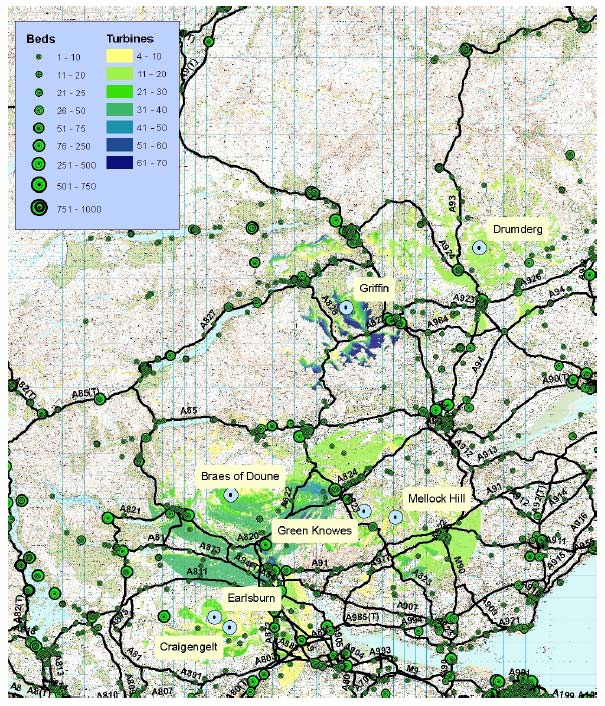 The case study area covers virtually the whole of Scotland north of the central belt and, with the exception of traffic using the A83 to Inverary (for Campbeltown or Oban) all relevant tourist traffic. This traffic consists of primarily three groups:

The picture is particularly confused by tourists travelling east to west (and v.v.) either on long day trips or staying overnight whether in or close to the area.

Whilst the numbers on the major routes at specific points is relatively easy to obtain the total number of vehicles and the consequent percentage of vehicles exposed to wind farms is far more difficult to determine. It is not possible to clearly determine if a vehicle travelling along a stretch of road has or has not been exposed before in the area.

Figure 9-5 provides a schematic diagram of these flows. Again whilst we warn that these figures are best estimates and have a wide error margin, the importance of the A82 as a tourist route is clear, carrying almost as many into the Highlands as the recognised key route, the A9. Equally it is clear that some of the routes in areas subject to extremely vigorous opposition carry relatively low volumes of tourists.

There are a number of wind farms in the area, the most prominent being the Braes of Doune which looks over the A9 and out, in the distance to Stirling. As discussed in section 5.3 the only routes that do not have exposure are the A82 and A81/821 and consideration of the flows gives Table 9-4

Our estimate is that 85% of holidaymakers will be exposed to wind farms in the area. For Perthshire, Business Tourism constitutes 40% of tourism activity i.e. any impact will fall on 52% (85% of 60%) of the tourism market as a whole.

Table 9-5 shows the number and percentage of premises and bedrooms that lie within the Zone of Visual Impact, which it will be remembered in this case requires sight of 4 wind turbines within 15km. Again we assume that 50% of the rooms are affected in any business, which suggests an overall decline in price on 6.6% of the accommodation.

Given the size of the tourist economy, however, a significant price decline in 5% of hotels will have measurable impacts.

Figs 9.6 and 9.7 provide the DREAM output for the change in expenditure due to decreased numbers going to the area and due to the reduction in the prices that can be charged by hotels in the region.

Examining first the general contraction, it is estimated that the resulting fall in expenditure of £8.54m will lead to a reduction of £5.6m. This, in turn, will reduce demand by £1.8m from local industry and £2.5m in wages. The final outcome is a decrease in income in the area of £5.2m and 279 jobs.

The effect of reduced prices in hotels is put at some £1.32m, a not insignificant sum. Tracing the impact through the system we find

2. Because of the high wage content this has a relatively high type 2 multiplier of 2.066

3. Because the wages are low the employment multiplier is relatively low 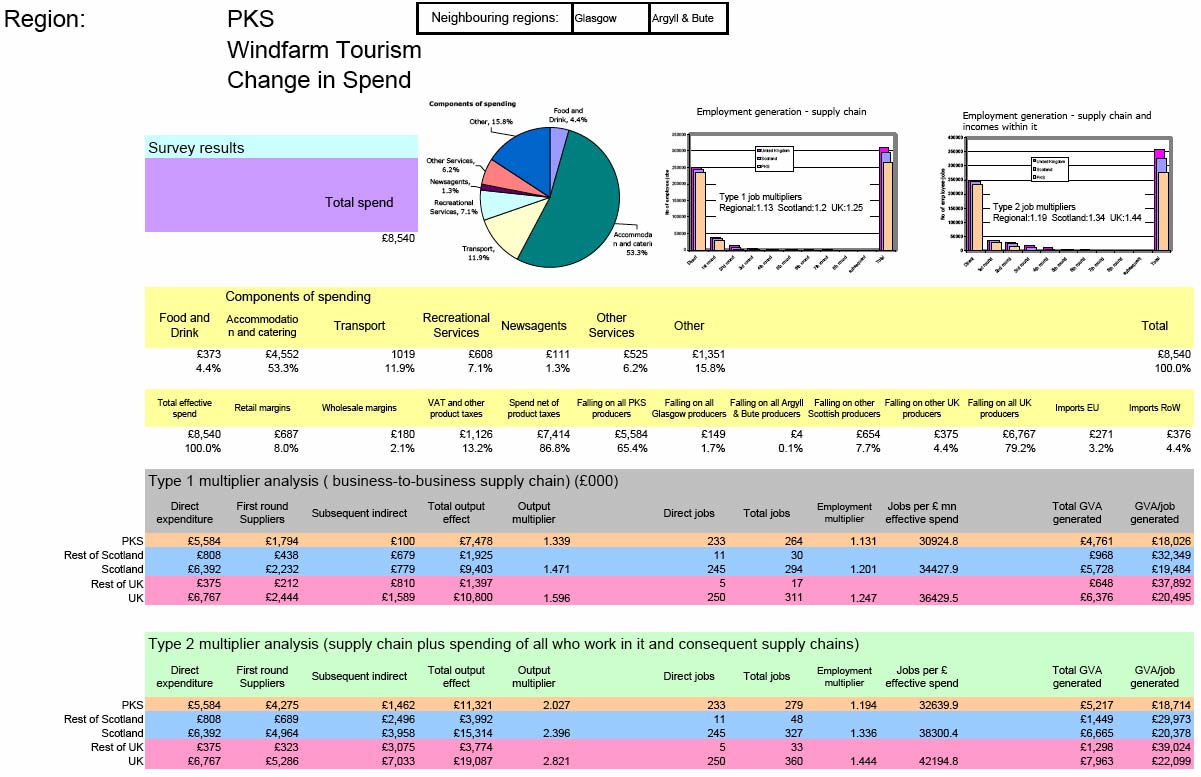 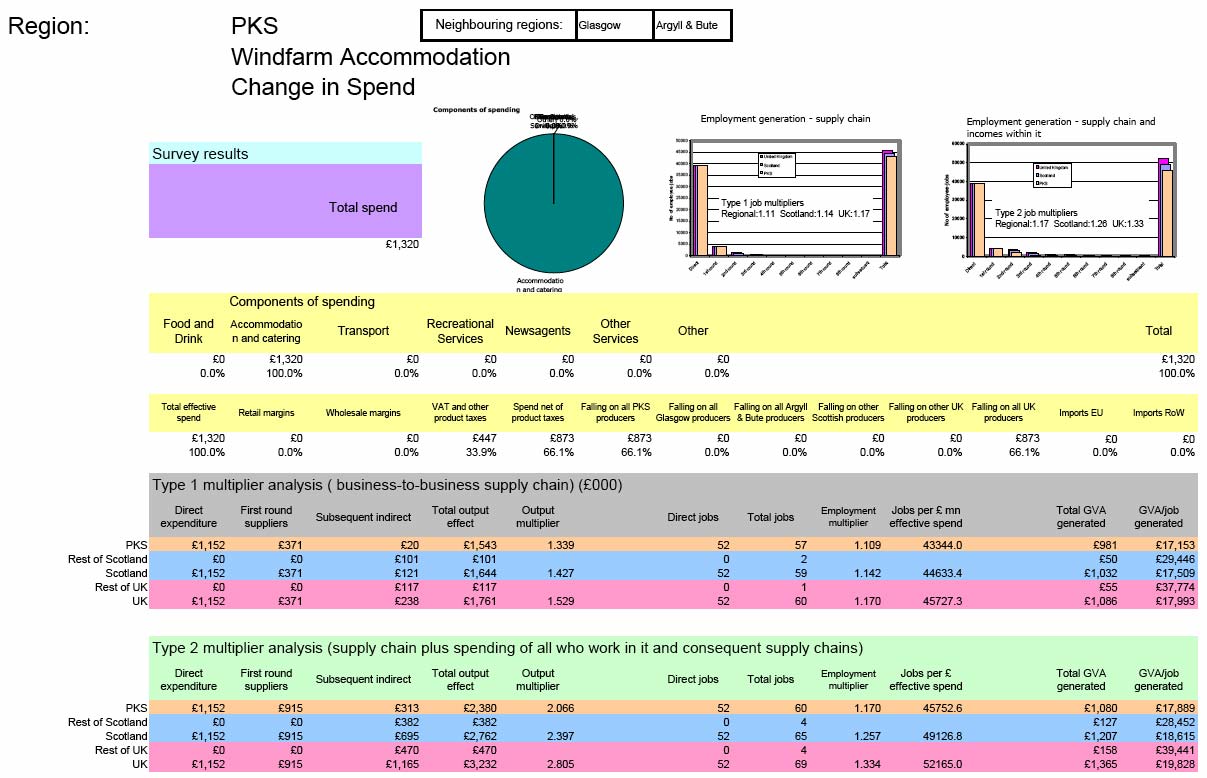