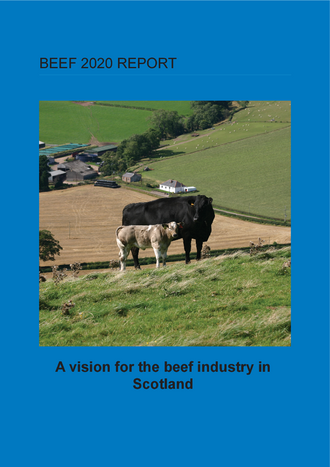 While beef cattle farming has to be at the heart of a successful Scottish beef industry, the industry itself is a more diverse entity ranging from the agricultural supply sector and veterinarians, through primary producers and livestock hauliers to the auction companies and processing businesses and on to the retail market. Each link in this chain makes a vital contribution to a strong and sustainable industry.

Since 2009 the Scottish Government has recognised the strategic role of food and drink in the Scottish economy by adopting a Food and Drink Policy. In addition, the major sectors of the food and drink industry are now working together - and in partnership with government - through Scotland Food & Drink. The industry has set and surpassed its original growth targets with new ones set in 2013. The beef sector will continue to be a major contributor to the new 2017 turnover target for the sector of £16.5bn as well as being an iconic exemplar of high quality Scottish food.

Nevertheless, the beef sector's ability to meet these targets is compromised by a number of challenges not least of which are the steady declines in livestock numbers since the last reform of the CAP implemented in 2005 and Scottish abattoir throughput. The former has seen beef cow numbers fall some 50,000 head and the latter has seen a reduction in throughput of 15%. Both halves of the industry are plagued by low profitability.

Measurements of enterprise profitability recorded over many years, either at enterprise level by Quality Meat Scotland ( QMS) or at farm level by Scottish Government show that, even before cuts in CAP support, very few beef enterprises are profitable at a level to reward the proprietors for their unpaid labour and risk capital invested in their business. Nevertheless, analysis of those businesses that are successful and growing identify a number of key success factors that underpin financial performance including ruthless cost control, high levels of technical performance and the appliance of science and technology.

European beef is amongst the most expensive in the world to produce and Scottish beef is at the top of that scale [1] . For that reason, the Scottish beef industry has positioned itself in high value markets through its industry led brand protocols for "Scotch Beef" and the early adoption of the EU's Protected Geographical Indicator ( PGI) scheme.

The Scottish beef industry is one of the few examples of any scale worldwide which are within striking distance of that status. It is vital that we respond to these challenges and build on our natural advantages of abundant rough grazing and ample rainfall.

The Scottish Government has ambitious targets with respect to climate change and the reduction of greenhouse gas emissions. Agriculture and ruminants in particular make a significant contribution to such emissions and the beef industry will be looked upon to make its fair contribution to these targets.

Grass and rough grazing makes up some 80% of Scotland's agricultural area. It is therefore important that this resource is fully utilised.

The only contribution which rough grazing land can make to the production of food for humans is through the grazing of ruminants. This valuable protein source can only be converted into human edible protein by a ruminant which in turn dictates that ruminant livestock will inevitably play a long term key role in Scottish agriculture.

Consequently, one guiding principle behind our proposals is the need to take serious steps to minimise the carbon footprint of every kilogram of meat produced. This can be achieved by managing animals more efficiently, essentially reducing death, disease and lack of productivity by paying yet more attention to breeding, nutrition and animal health. This in turn reduces waste, minimises carbon footprint per kilogram of meat produced and reduces the pressure to take more land into production.

It is also a key driver of business profitability, when one recognises that every loss through emissions within a production system is a loss of the valuable input which was required to generate the emission in the first place.

There are few if any measures which we can take to reduce harmful greenhouse gas emissions which will not at the same time benefit the profitability of the farm business.

Against this background, the Beef 2020 group is charged with creating a vision, and actions, for the Scottish beef industry that will deliver for 2020 and beyond a framework that allows the industry to adjust to the developing business environment and secure a sustainable and resilient position to allow it to thrive in the 21 st century.