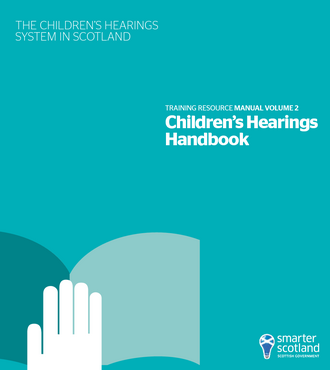 The shortcomings which cause dissatisfaction within the present juvenile justice system (and this is no reflection on those who serve in such courts), seems to us to arise essentially from the fact that they seek to combine the characteristics of a court of criminal law with those of a specialised agency for the treatment of juvenile offenders, proceeding on a preventive and educational principle. On that principle, the offence while the essential basis of judicial action, has significance only as a pointer to the need for intervention …….
(The Kilbrandon Report, 1964, para. 74)

From the earliest age of understanding, every child finds himself part of a given family and a given environment - factors which are beyond his or society's power to control. During childhood the child is subject to the influences of home and school. Where these have for whatever reason fallen short or failed, the precise means by which the special needs of this minority of children are brought to light are equally largely fortuitous. The individual need may at that stage differ in degree, but scarcely in essential character, and such children may be said at present to be, more than most, in a real and special sense 'hostages to fortune'.
(The Kilbrandon Report, 1964, para. 251)

In any case which a court has to decide, it is simply a working hypothesis born of human experience. Men and women have always drawn on their own experience in everyday matters of family life and in any given society people will tend to share certain views about them. In language of unsurpassed beauty that has echoed down the ages, Proverbs and the Wisdom of Solomon give expression to the views on the upbringing and welfare of children which were current in ancient Israel. While we can never hope to emulate their poetry, we too, as a society in twenty-first century Britain, must hold certain common values and assumptions as to the upbringing of children.
(Lord President Rodger, White v White, March 2001)