The recreation estimates were produced using the Scottish Recreation Survey (ScRS), which ran between 2003 and 2012. Spending and time per visit estimates beyond 2012 were fixed at 2012 levels and multiplied by visit numbers from the Scotland’s People and Nature Survey (SPANS), which ran in 2013 to 2014 and 2017 to 2018. Time periods presented alter throughout this section in accordance with data availability.

Currently, habitat breakdowns of recreation are provided up to 2012 but we will seek to fully incorporate SPANS data for more timely estimates in the future. More information on the surveys and methods used are available in Section 9 of this article.

The UK estimates of recreation are scaled from the Monitor of Engagement with the Natural Environment Survey (MENE) to represent the UK population. Therefore, since UK estimates did not include Scottish, Welsh, or Northern Ireland surveys, comparisons between Scottish and UK values are, in effect, comparisons with inflated English trends. We will seek to fully incorporate additional surveys, such as ScRS and SPANS, in future UK estimations of outdoor recreation.

It is worth noting that these surveys focus on short day-trips from home and miss out potentially large amounts of spending on outdoor activity from domestic tourism, which future reports will include.

Between 2004 and 2017, time spent on Scottish outdoor recreation (excluding travel time) increased 94%, from 412 million hours to 798 million hours respectively. This trend was driven by visitor numbers, which increased 168%, from 204 million visits to 547 million visits over the same period. Average time spent per visit during this period decreased from 2 hours in 2004 to 1 hour and 28 minutes in 2012.

Figure 21 shows two periods in which outdoor recreation increased consistently: 2004 to 2007 (time spent increased 52% and visit numbers increased 91%) and 2012 to 2017. In 2008, despite increasing visitor numbers, time spent dropped 5% to 596 million hours due to average time spent per visit decreasing by 8 minutes.

Time spent on outdoor recreation increased to a high of 798 million hours in 2017. This is likely to be a conservative estimate as we used the, relatively low, 2012 ScRS average time spent per visit with SPANS visitor numbers. There were 214 million more Scottish visits to the outdoors in 2017 than 2012.

Outdoor recreation time spent and number of visits, Scotland, 2004 to 2017 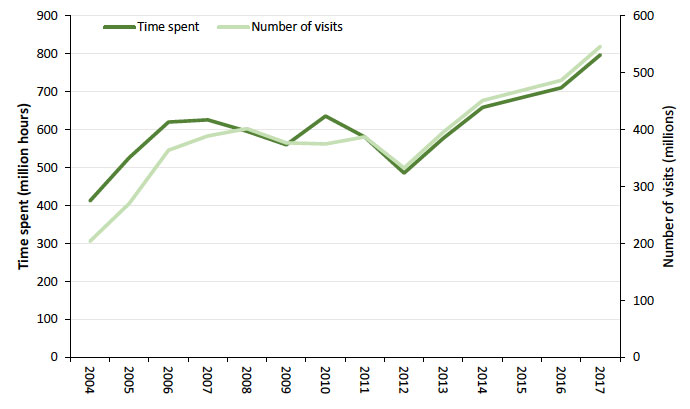 The 2000s saw Scotland move towards a “little and often” approach to outdoor recreation. Across all habitats (but farmland), visit length shortened but increased in number. For most habitats the increasing number of visits outweighed declining visit times to drive growth in overall time spent outdoors. Woodland and lochs (including reservoirs) were the exception to the general trend as the only habitats with a net decline in total time spent between 2004 and 2012.

The Scottish population lingered longest when visiting inland lochs (average 2 hours and 59 minutes for a visit, 2004 to 2012). Loch visits were 79% longer than the average (1 hour and 40 minutes). Visits (and other activities) in the mountains and moors were almost as long as lochs, with an average time spent per visit of 2 hours and 42 minutes (61% higher than the average 2004 to 2012).

Like Scotland, in the UK between 2009 and 2012, visits to urban outdoor areas represented the largest proportion of overall time spent (41%). Scottish visitors remained longer in woodlands, farms, and towns and cities (urban) than the average UK visitor between 2009 and 2012 (78%, 34% and 25% more time spent per visit on average respectively). A trip to the beach took similar amounts of time across the UK, with only 1 minute extra spent in Scotland than in the UK average (1 hour and 59 minutes Scotland and 1 hour and 58 minutes UK for coastal margins).

Figure 22: Total expenditure on outdoor recreation declined by 23% in 2008, recovering in following years

Expenditure on outdoor recreation, Scotland, 2004 to 2017 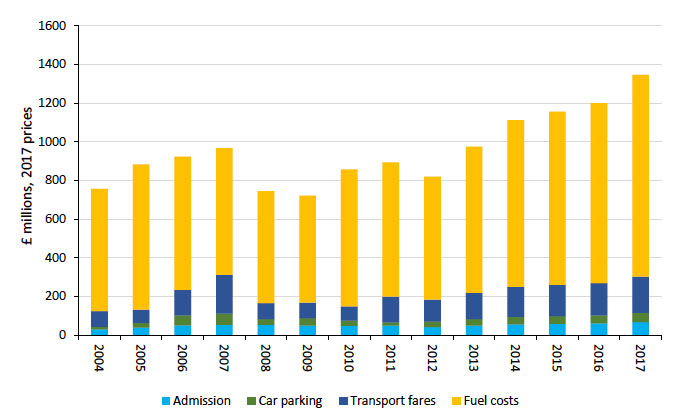 Annual expenditure per capita on outdoor recreation, Scotland and UK, 2009 to 2017 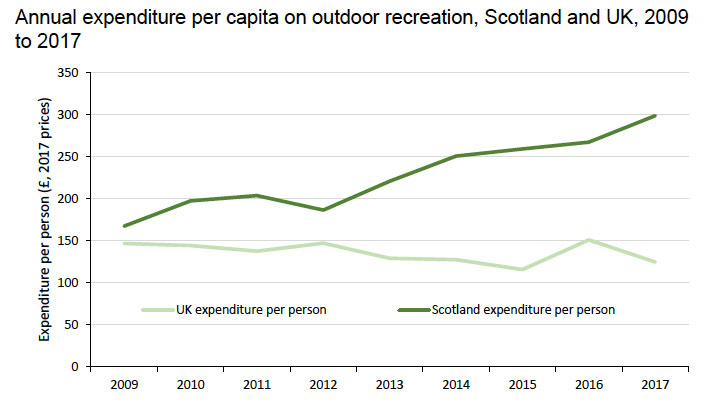 Figure 24: The average Scottish person spends more time in the outdoors than the UK average

Annual time spent per capita on outdoor recreation, Scotland and UK, 2009 to 2017 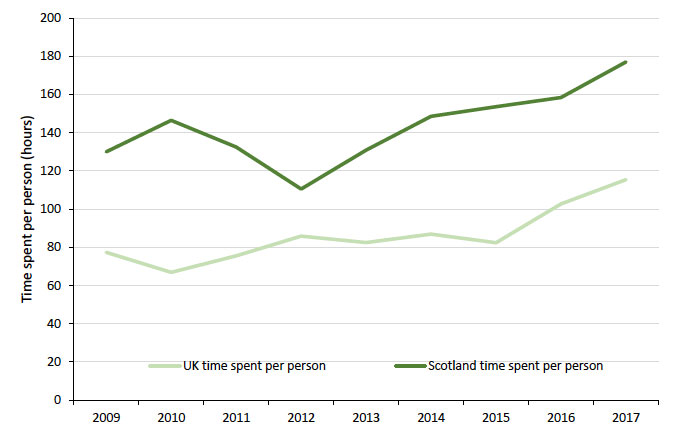 For the years in which we have data (2004 to 2012) the accross habitats in Scotland was variable but individual habitat trends were relatively stable. Mirroring visitor numbers, urban and coastal margins habitats saw the largest average annual expenditure (£209 million and £199 million respectively). However, while woodland was the third most-visited habitat, on average more money was spent on visits to mountain and moorland annually, at £123 million compared with £108 million for woodland. On average, between 2004 and 2012, expenditure per visit was greatest for visits to mountain and moorland (£6.14), followed by visits to lochs (and reservoirs) (£5.92) and coastal margin (£4.51). Despite having the largest overall expenditure, visits to urban had the lowest expenditure per visit (£1.28).