Food, water, and materials produced by nature and consumed by society are known as provisioning services.

Provisioning services currently included in the Scottish Ecosystem Accounts are:

Figure 1 presents an index of the physical flows of these services. 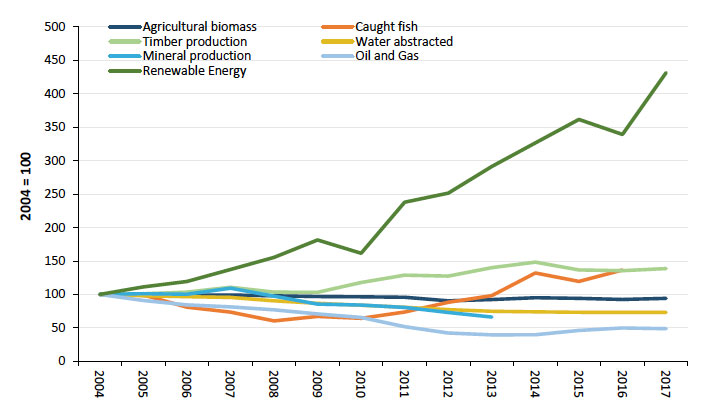 Figure 2: Oil and gas valuation was greater than other provisioning services combined until 2015

Annual value of oil and gas and other provisioning services, Scotland, 2004 to 2015 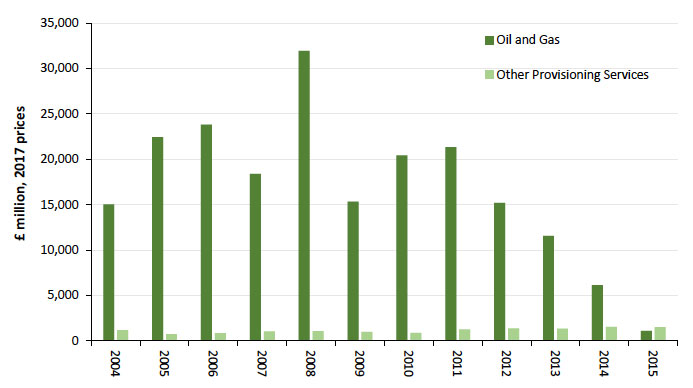 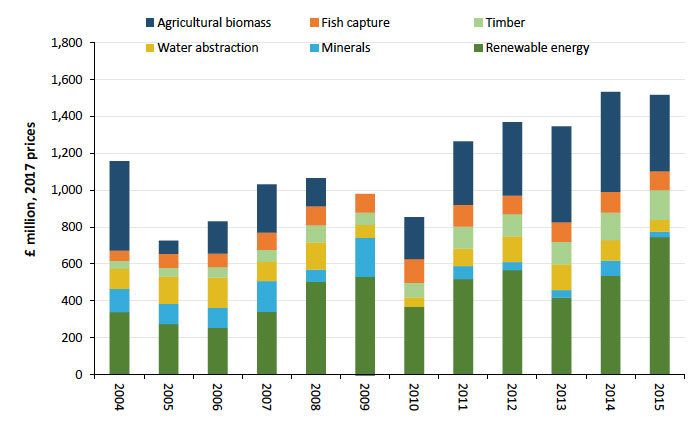 1. Where an annual service valuation is zero or negative it does not appear in the chart.

The total value of provisioning services in Scotland has decreased 87.8% between 2010 and 2015, compared with the value of services for the UK as a whole, which decreased 75.9% for the same period (see Figure 4).

This decrease has primarily been driven by the declining valuation of the oil and gas service, resulting from declining production, which decreased in Scotland and the UK by 94.7% and 94.6% respectively between 2010 and 2015. The decline in the valuation of oil and gas over this period can be attributed to falling income, due to production and general price decline, and increasing costs.

Figure 4: Total provisioning service valuation has declined in both Scotland and the UK 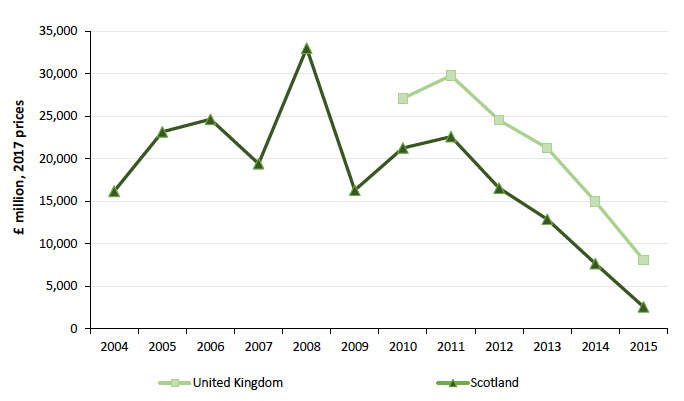 Farmed animals are not included in these estimates as they are seen as produced rather than natural assets, instead the grass and feed that livestock eat are regarded as ecosystem services and so are included.

This was primarily caused by a fall in the production of grazed biomass (animals consuming from the land), which dropped by 31.9% between the years 2003 and 2017. Looking at the results from the Scottish Agriculture Census, livestock in Scotland (cattle, sheep, pigs) declined over the period 2006 to 2016, which caused a fall in grazed biomass.

Agricultural biomass has generally declined year-on-year since 2003 (see Figure 5), with increases observed in 2013, 2014 and the latest year 2017. All elements of agricultural biomass rose in 2017, except for fruit and feedstock, which declined slightly.

Agricultural biomass production in Scotland, 2003 to 2017

In 2016, fish capture in Scottish waters was over two-thirds higher than in 2003

Fish capture in Scottish waters has increased 70% since 2003 from 628.2 thousand tonnes to 1,065.2 thousand tonnes in 2016 (see Figure 6). This is primarily due to an increase in marine fish capture, which represents the clear majority of total fish capture (over 99%). Aquaculture or farmed fish, like farmed livestock have been removed from estimates as farmed fish are viewed as a produced asset and not a natural asset. 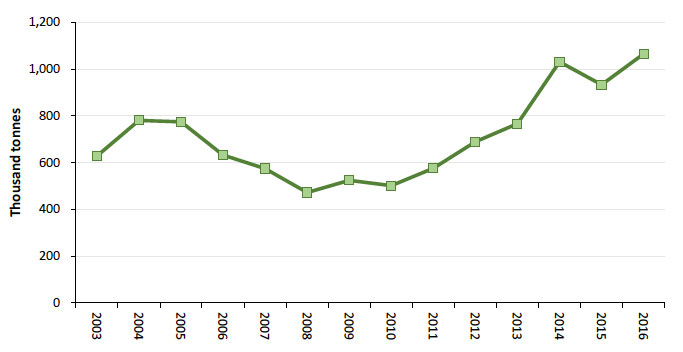 The largest annual increases in fish capture in Scottish waters occurred in the more recent years, with 2014 seeing an annual expansion of nearly 35% and 2016 observing an increase of 14%.

This can also be seen when comparing fishing fleets, as Scottish vessels represented around 60% of all marine fish capture from UK vessels between the years 2012 and 2016, and landings into Scottish ports made up over two-thirds of total landings into the UK.

Despite Scottish marine fish capture making up a large proportion of UK marine fish capture, the Scottish annual value makes up less than half of the value of UK fish capture. Looking at the UK Sea Fisheries Statistics 2017 report (PDF, 22.5MB), this may be because important elements of the Scottish fleet are engaged in several fisheries that are high volume but lower priced, such as herring and mackerel caught in the North Sea and West of Scotland waters. The Scottish fish capture provisioning service valuation should be interpreted as a minimum valuation as it excludes fish capture in Scottish waters not represented in Scottish national accounts. Please see the methodology Section 9 for further details.

Scottish timber production has almost doubled in the last 20 years

Scottish timber production has generally increased year-on-year, albeit with slight falls during the downturn in 2008 to 2009 and recently in 2015 to 2016. Despite remaining below the 2014 peak, timber production in 2017 rose to the highest level seen in three years, driven primarily by an increase in private sector production. 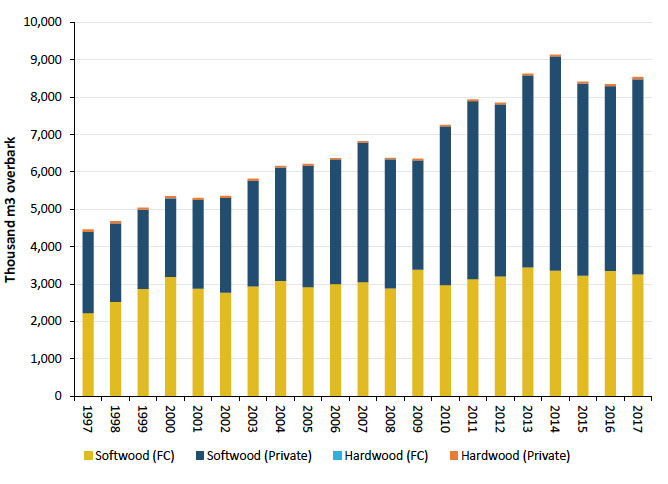 Figure 8: The value of timber production in Scotland in 2017 rose to the highest level in the series history 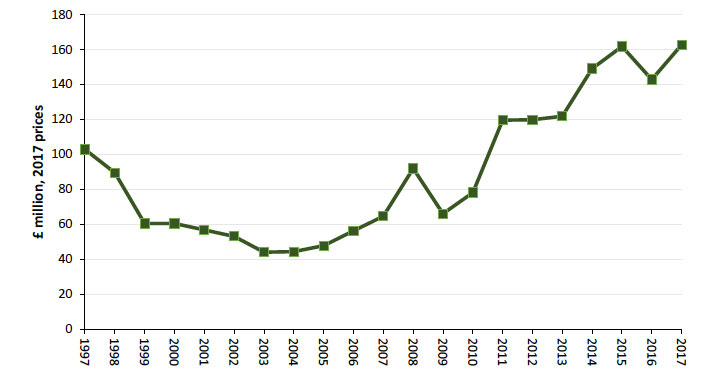 In Scotland, water abstraction (extracting water from natural sources) for public water supply by Scottish Water declined between the years 2002 and 2017, from 912 million m3 to 666 million m3 respectively (see Figure 9). This was despite both domestic consumption and operational use (fire service use, waste water treatment works, the distribution network and so on) demand increasing and was due to a reduction in the amount of water that was lost through leakages. This was reduced by nearly 50% from 413 million m3 in 2002 to 204 million m3 in 2017: meaning less water was abstracted despite the rise in demand.

Figure 9: Water abstraction in Scotland falls to its lowest level in the series history, partly caused by less leakage 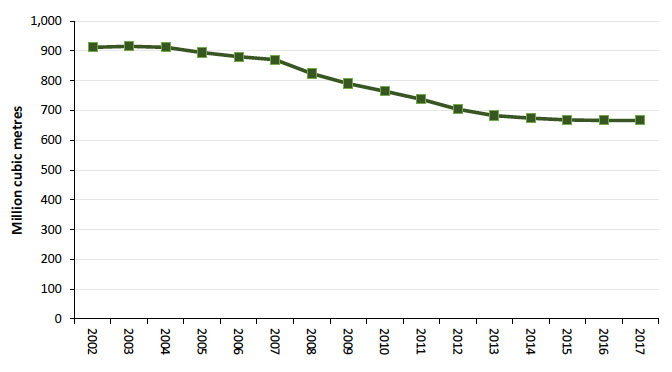 The value of water abstraction fluctuated throughout the time series, with a peak of £165.11 million in 2006 and a low of £63.68 million in 2016. As with the UK Ecosystem Service Accounts, the valuation of water does not include significant uses, particularly in Scotland, such as drinks manufacturing and hydroelectric power.

Figure 10: Scottish mineral production in Scotland fell by nearly a third between the years 1997 to 2013 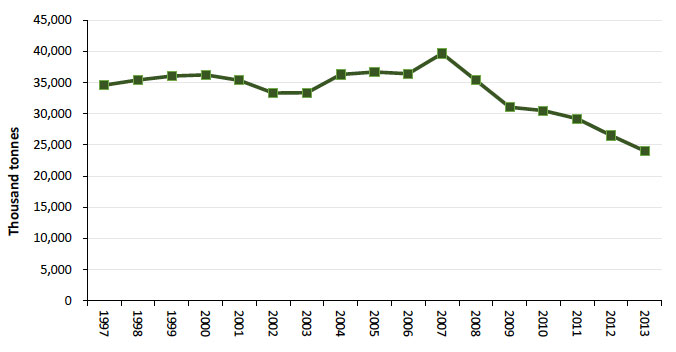 The decline in mineral production in Scotland can be mainly attributed to falls in the production of minerals used in the foundations for roads and buildings such as sand and gravel, and igneous rock, which declined by 50.4% and 21.3% respectively between the years 1997 to 2013.

The annual valuation of the mineral production abiotic provisioning service in Scotland has decreased, with fluctuation, by £60.2 million since 1998 (67.2%) to £29.4 million in 2015. Fluctuation has largely been driven by fluctuation in the gross operating surplus of the mining and quarrying industry in Scotland. The annual value peaked in 2009 with a valuation of £211.1 million but has since declined by 86.1% to £29.4 million in 2015. This trend is reflected in the asset valuation.

Unstable valuations of the mineral production abiotic provisioning service and years of negative gross operating surplus for the minerals industry in the UK National Accounts do not lend well to valuation comparisons between the UK and Scotland. Data inputs and methods will be reviewed in future accounts.

Section 9 provides details on the methodology used to estimate the value of oil and gas production. This is a “resource rent” approach, which estimates the surplus remaining to the extractor after all costs and normal returns have been taken into account. This is closely related to profitability, which explains why the fall in value over recent years during a period of increasing production is significantly greater than the relative decline in the oil price and hence revenues.

Resource rent is different from an intrinsic measure of value such as the wholesale price determined by the market, which is in effect the willingness to pay for a good and therefore the value placed on it by the consumer, or the value it provides to the economy in terms of economic output (that is, gross value added). Resource rent does not value, as benefits, government receipts, employment, supply chain activity or energy security.

Figure 11: Since 1998, oil and gas production has steadily declined, with production in 2017 less than half the amount that was produced in 1998 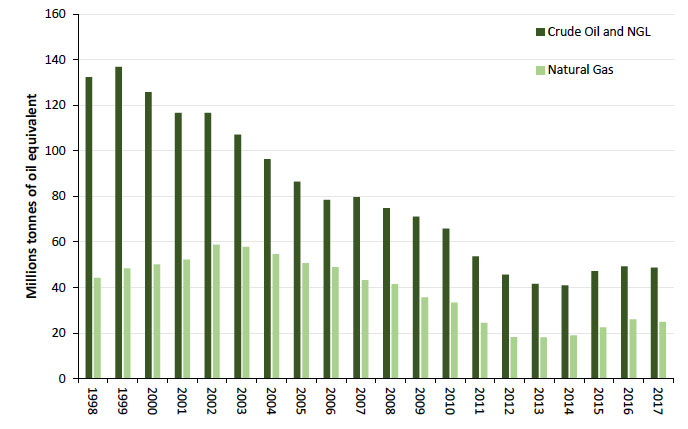 The annual valuation of oil and gas abiotic provisioning in Scotland has fluctuated, driven largely by price changes and production trends (see Figure 12). The largest year-on-year real price increases were seen from 1999 to 2000 (63.5% for oil and 80.2% for gas) and 2007 to 2008 (43.3% for oil and 101.8% for gas), which saw gas prices more than double. These spikes are reflected in the annual valuation.

More recently, the annual value fell to a new series low in 2015 of £1,078.2 million despite production picking up. The fall in the annual value in 2015 was primarily due to a sharp decline in both oil and gas prices, which saw the lowest prices in 11 and 6 years respectively.

Figure 12: The valuation of oil and gas in Scotland reached a record high in 2008, due to gas prices more than doubling 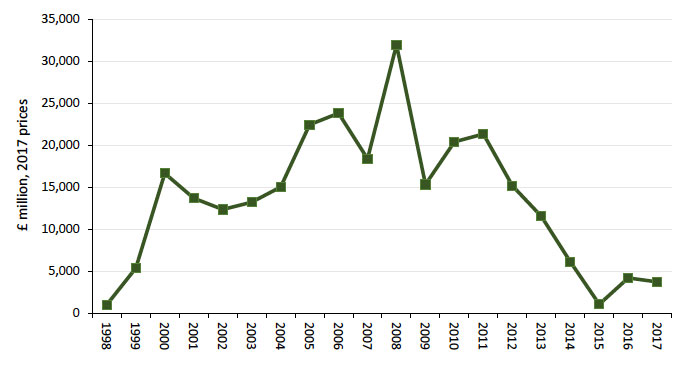 The UK annual value of oil and gas followed a similar trend to Scotland, with the annual value in Scotland making up a large proportion of the UK figure. Both the Scottish and UK oil and gas calculations use the same price bases for oil and gas.

Electricity generation from renewable sources in Scotland has increased dramatically since 2000 and by 2017 was over five times larger. National and international incentives, including the EU Renewable Energy Directive and Renewable Obligation (RO) target, have helped contribute towards the increase.

Most years have seen increases except 2003, 2010 and 2016. The 2016 decrease is attributable to a wind generation decline of 10.2%, due to a 10.9% reduction in average wind speeds. This is reflected in the wind generation load factor, a measure of generation efficiency being the utilisation of total generation capacity, which also decreased from 29.2% to 23.4% between 2015 and 2016.

Figure 13: From 2010, wind has been the largest producer of electricity from renewable sources in Scotland

Breakdown of renewable electricity generation from renewable sources, Scotland, 2000 to 2017 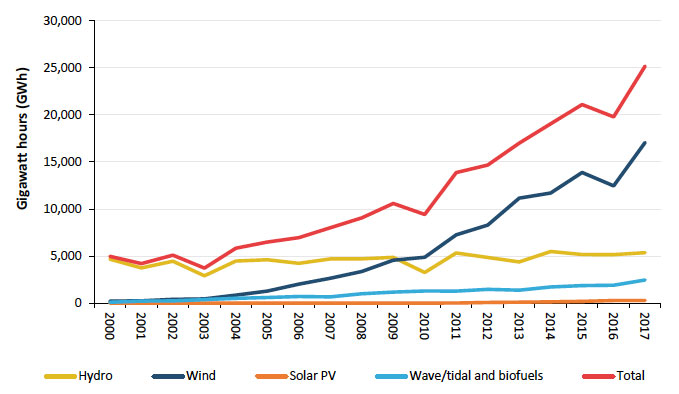 2. Figures may not sum due to rounding.

In 2004, electricity generated from the renewable sector accounted for 11.7% or 5,832.2 gigawatt hours (GWh) of the total electricity generated from all sources (49,937.0 GWh) in Scotland. Whilst total generation has remained relatively stable, between 2004 and 2017, the proportional contribution of renewables has generally increased year-on-year to a high of 51.7% in 2017 or 25,165.9 GWh as shown in Figure 14.

Figure 14: In 2017, 51.7% of Scotland’s electricity production came from renewable sources

Electricity production generation from renewable and non-renewable sources, Scotland, 2004 to 2017

The monetary estimates are gross value added only and not resource rent calculations, therefore are over-estimates. The estimated gross value added of electricity generation from renewable sources in Scotland has fluctuated across the time series but overall has increased 120.5%, from £338.3 million in 2004 to a peak of £746.1 million in 2015.

In 2017, the Scottish renewable sector generated 25,165.9 GWh or 25.3% of UK renewable generation, down from 50.1% (4,971.6 GWh) in 2000. Scotland has consistently represented around 90% of UK hydropower generation. Despite Scotland’s fivefold increase in renewable electricity production its decreasing contribution to UK renewable generation is due to faster growth of renewables in England, most notably in the bioenergy sector.

Scotland’s contribution to the UK’s renewables gross value added was 64.9% in 2010 and has declined year-on-year since, to 20.3% in 2015. This declining trend follows that of the Scottish contribution to UK renewable generation.