As well as tangible provisioning services, natural assets in Scotland provide a number of typically intangible regulating services, such as cleaning the air, sequestering carbon and regulating water flows to prevent flooding.

The pollutants covered in pollution removal are:

Air pollution leads to respiratory diseases in humans and the risk of those diseases for a population can be estimated based on the levels of pollution and the health costs of that disease.

Both carbon sequestration and air pollution removal are cross-cutting ecosystem services, which are provided by a range of broad habitats, although woodland is the primary supplier in both cases. Analysis of these two services are covered in more depth in the following sections.

Carbon sequestration in Scotland has increased gradually since 1998

Overall the estimated carbon sequestration for Scotland has increased 26.0% from 12.3 million tonnes of carbon dioxide equivalent (MtCO2e) in 1998 to 15.5 MtCO2e in 2016, which is the highest figure on record.

From 1998, carbon sequestration increased steadily year-on-year, reaching a high in 2010 (15.2 MtCO2e) before declining for two consecutive years to 13.4 MtCO2e in 2012. After 2012, carbon sequestration rose, reaching a series high in 2016 of 15.5 MtCO2e (see Figure 16). These trends are largely driven by changes in the age structure of woodland, due to annual felling and planting, as younger trees will sequester less carbon.

Figure 16: Carbon sequestration in Scotland reached a record high in 2016

Carbon sequestration for of grassland and woodland, Scotland, 1998 to 2016

The regulating service of carbon sequestration valuation has increased 60.5% from £604.4 million in 1998 to £995.7 million in 2016. This trend has been driven both by increases in sequestration and steady increases in the non-traded price of carbon (1.5% annual growth over this period), which is projected by the Department for Business, Energy and Industrial Strategy (BEIS) to keep increasing in real terms until around 2080. In 2016, the carbon sequestration regulating service was valued at £776.2 million for woodland and £219.3 million for grassland.

Despite decreasing carbon sequestration, the annual valuation is projected to grow, driven by increases in carbon cost, to £1,969.2 million; £1,068.3 for woodland and £900.9 million for grassland.

Air pollutant removal data have been modelled for 2007, 2011, 2015 and 2030. Between these years linear interpolation has been used as an estimation of pollution removal. As with all methods, this method is under review.

Between the years 2007 to 2017, pollution removal in Scotland decreased 2.3% from 409.2 thousand tonnes to 399.7 thousand tonnes (see Figure 17). Much of this decline is accounted for by a reduction in air pollution removed by woodland, which fell by 4.2% between the years 2007 and 2017. This declining trend is largely due to less pollution being emitted into the atmosphere for vegetation to remove, rather than a reflection of changing condition, extent or species mix of vegetation.

Ground-level ozone (O3) represented the majority of total pollution removal (over 90%) from 2007 to 2017. However, the most harmful pollutant is PM2.5 (fine particulate matter with a diameter of less than 2.5 micrometres, or 3% of the diameter of a human hair), which can bypass the nose and throat to penetrate deep into the lungs, leading to potentially serious health effects and healthcare costs. This can be seen in Figure 18, with the removal of PM2.5 accounting for 88% (£52.3 million) of all avoided healthcare damage costs in 2017.

Figure 18: The removal of PM2.5 from the atmosphere led to an overall saving in health damage costs of £52.3 million in Scotland during 2017

Sources: Office for National Statistics and Centre for Ecology and Hydrology

Figure 19: Woodland removes the most harmful pollutants during 2017 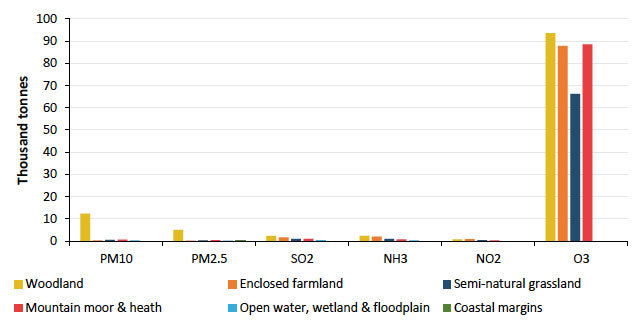 The pollution removal regulating service is valued through avoided health damage cost modelling, detailed in Section 9 of this publication. The annual valuation of pollution removal for all habitats declined by 39% between the years 2007 and 2017, from £98.0 million to £59.6 million (see Figure 20). As noted earlier, this declining trend is largely due to less pollution being emitted into the atmosphere.

Figure 20: Avoided health costs due to the reduction in harmful pollutants fall by nearly two-thirds between the years 2007 to 2017 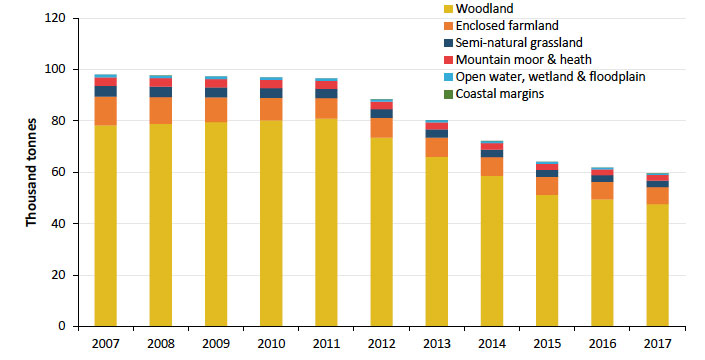 Despite habitats in Scotland removing on average 29% of the UK’s most harmful pollutants (PM2.5) over the time series, Scotland only made up on average 6% of the UK annual valuation from air pollutant removal. One reason behind this difference is the lower relative population, including large areas of low population density of Scotland, meaning there will be fewer avoided health damage costs from the removal of PM2.5.