This section of the publication presents data on source greenhouse gas emissions which have been adjusted to take into account of trading in the EU Emissions Trading System (EU ETS). This is the basis on which Scotland's statutory targets are measured against under the Climate Change (Scotland) Act 2009.

What is the EU Emissions Trading System (EU ETS)?

Launched in 2005, the EU ETS is an EU policy aimed at mitigating climate change by limiting greenhouse gas emissions from industry sectors and aviation. Participants include more than 11,000 heavy energy-using installations in power generation, the manufacturing industry and airlines across 31 countries in the European Economic Area (EEA).

How does the EU ETS work?

Scotland in the EU ETS

The EU ETS contributes to delivering Scotland's Climate Change Targets through incentivising the reduction in emissions from Scottish organisations participating in the system. In 2017, there were 76 fixed Scottish installations which are regulated by Scottish Environment Protection Agency (SEPA) that surrendered emissions allowances in the EU ETS. 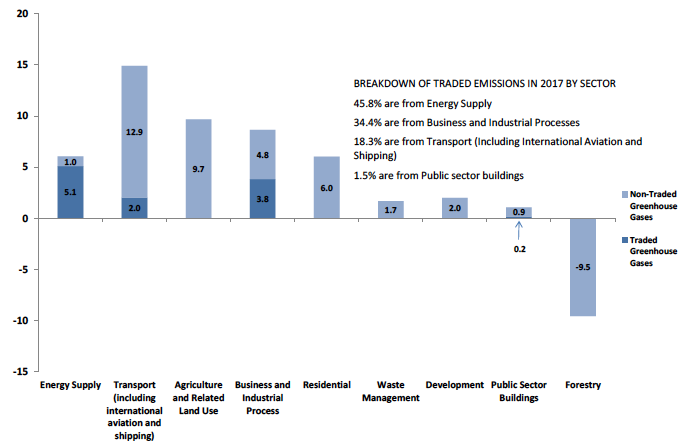 The Scotland figure for the emissions which have been surrendered in the EU ETS is slightly different to that reported for traded emissions in the Greenhouse Gas Inventories for England, Scotland, Wales and Northern Ireland report produced by Ricardo and Aether on behalf of the devolved administrations. There are number of reasons for this:

Secondly, operators who participate in the EU ETS must, by 30 April in each year, surrender a number of allowances equal to the annual reportable emissions which the installation made in the previous year. However, as a result of errors or non-compliance in the EU ETS, the figure on surrendered and reported emissions can differ, until both are finalised. These can be on-going situations throughout each Phase of the EU ETS. By the end of each Phase any difference between the two figures should be rectified.

What are adjusted emissions and the Net Scottish Emissions Account (NSEA)?

The Scottish climate change targets are assessed against the Net Scottish Emissions Account (NSEA), which is detailed in the Climate Change (Scotland) Act 2009 and has been reported for each year from 2010 to 2017 as part of the Act. The NSEA accounts for the greenhouse gas emissions from sources in Scotland, Scotland's share of emissions from international aviation and international shipping, the effect of any relevant emissions removals (e.g. "carbon sinks" such as woodland) and the effect of the sale and purchase of relevant carbon units (tradable emissions allowances) in the EU ETS.

The EU ETS element of the NSEA is calculated by taking the difference between Scotland's notional share of the overall EU ETS cap and the number of emissions allowances surrendered from Scottish fixed installations in a given year, as well as an estimate of CO2 emissions surrendered from Scotland's share of domestic and international aviation. This amount is then added to non-traded net emissions to get the NSEA.

The NSEA formula is as follows:

The figure for the NSEA are known as adjusted emissions, as they are adjusted to take account of trading within the EU ETS. This adjustment takes the form of a 4-step process, which is outlined in Chart C2. 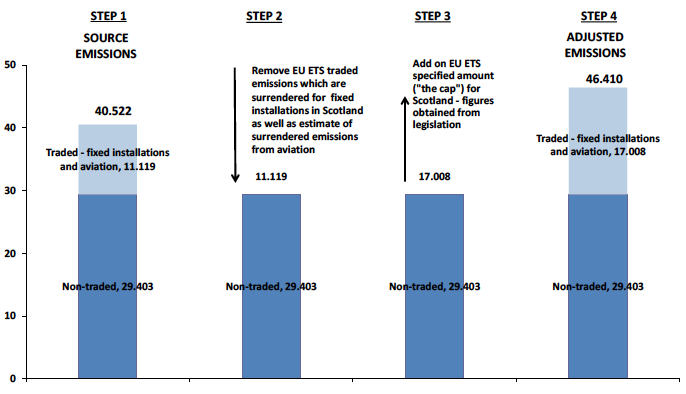 Add on the value of the EU ETS cap which is outlined within The Carbon Accounting Scheme (Scotland) Amendment Regulations 2019 [9]. The cap reflects an estimate of the Scottish share of the European wide EU ETS cap that is used for emissions accounting.

The Scottish EU ETS cap for 2017 is 17.008 MtCO2e. The Scottish Government has published a methodological paper titled Determining a Scottish EU ETS cap for 2017, which documents the calculations that determine how a notional emissions cap has been calculated for: (i) greenhouse gas emissions from fixed installations located in Scotland, and (ii) Scotland's share of emissions from domestic and international aviation.

In 2017, the adjusted emissions which take account of trading in the EU ETS is 46.410 MtCO2e. This is 5.9 MtCO2e higher than the value of estimated source emissions in 2017. Under the Climate Change (Scotland) Act, 2009 [10], an upward adjustment to source emissions is referred to as a debit from the Net Scottish Emissions Account [11]. This means that 5,888,794 units have been debited from the Net Scottish Emissions Account in 2017.

Scotland has a number of targets for reducing greenhouse gas emissions contained in legislation, within the Climate Change (Scotland) Act 2009. These targets can be summarised as follows:

The Act creates a statutory framework for greenhouse gas emissions reductions in Scotland by setting an interim target of at least a 42 per cent reduction for 2020, and at least an 80 per cent reduction target for 2050. These reductions are based on a 1990 baseline (1995 for the F-Gases). The Act also requires that Scottish Ministers set fixed annual targets for emissions at least 12 years in advance. In October 2010 the Scottish Parliament passed legislation setting the first batch of annual targets, for the years up to 2022[12]. Targets for 2023-2027 were set in October 2011.

Chart C3 contains data from the latest (1990-2017) inventory, adjusted for trading in the EU Emissions Trading System as well as data on progress against the 42 per cent and 80 per cent reduction targets. These percentage targets are based on a percentage reduction from the Baseline Period in the latest inventory. 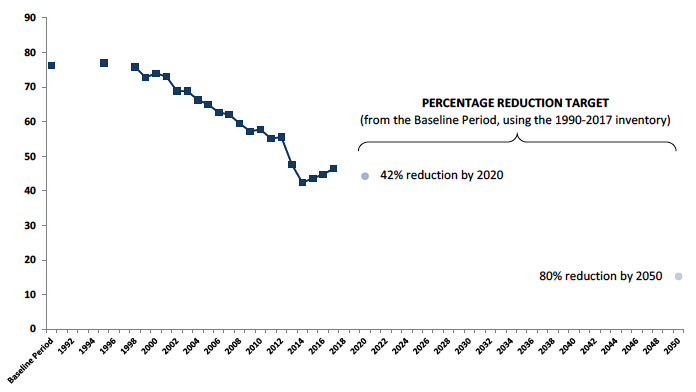 Chart C4 contains data from the latest (1990-2017) inventory, adjusted for trading in the EU Emissions Trading System. The fixed annual targets are also presented on this chart. The fixed annual targets were set at the time of the 1990-2008 inventory which was published in 2010. Emissions adjusted for trading in the EU ETS using the 1990-2008 are shown for context.

Since the publication of the 1990-2008 inventory there have been a large number of revisions to the underlying data, reflecting new scientific understanding of emissions from different sources. Overall, these revisions have increased the estimates of historic emissions.

As a consequence, the absolute reduction in emissions required to achieve the fixed targets set in 2010 is now larger than when the targets were set.

These revisions have less of an impact on the scale of the reduction required to meet the 2020 and 2050 targets as both are measured in terms of the percentage reduction from the baseline period.

Chart C4. Comparison of Adjusted Emissions and the Fixed Annual Targets which are based on the 1990-2008 Inventory. Values in MtCO2e 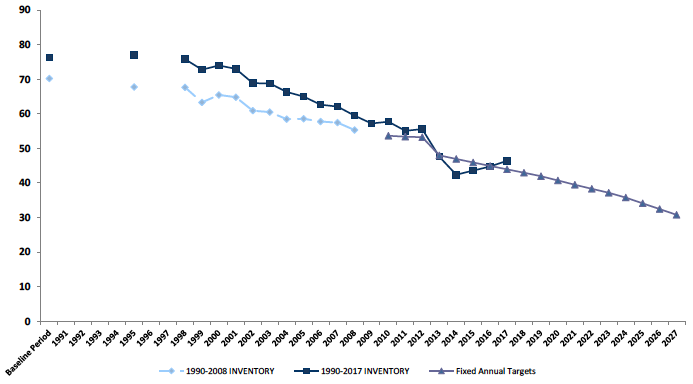 Chart C5 demonstrates the effect of the adjustment of source emissions for trading in the EU ETS, for calculation of the Net Scottish Emissions Account (NSEA). 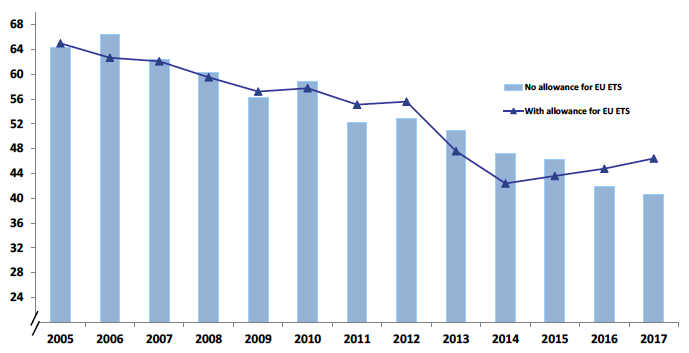