A measure of the actual emissions or removals in Scotland. Includes international aviation and shipping. Used for UK and international comparisons.

Adjusted Emissions: For Reporting Against Targets

Emissions adjusted to account for Scotland's participation in the EU Emissions Trading System (EU-ETS). These adjusted emissions are used to measure progress against the targets set in the Climate Change (Scotland) Act 2009.

ETS Adjusted emissions, the indicator on which the Scottish Government's statutory targets are based, increased in 2017 even though actual source emissions fell. Adjusted emissions count Scottish ETS allowances as contributing toward Scottish emissions irrespective of whether they are used by Scottish participants in the ETS to offset their emissions, or sold and used by emitters in other participating countries. The total number of allowances issued through the ETS system has increased steadily since 2014 as part of the EU's management of the ETS. As a result, Scotland's share of ETS permits, based on historic emissions, has automatically increased. As a result there has developed a significant disconnect between the figure for ETS adjusted emissions and the actual quantity of Scottish source emissions.

The Baseline Period uses 1990 for carbon dioxide, methane and nitrous oxide and 1995 for hydrofluorocarbons, perfluorocarbons, sulphur hexafluoride and nitrogen trifluoride 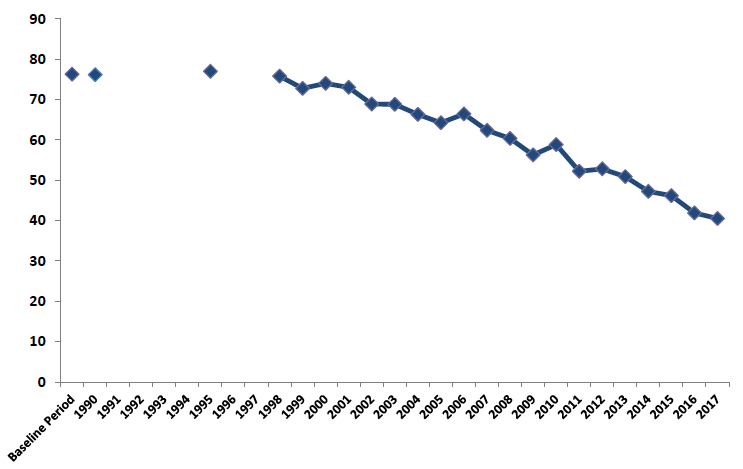 In 2017, Scottish source emissions of the basket of seven greenhouse gases were estimated to be 40.5 million tonnes carbon dioxide equivalent (MtCO2e). This is 3.3 per cent lower than the 2016 figure of 41.9 MtCO2e; a 1.4 MtCO2e decrease.

The main contributor to this reduction between 2016 and 2017 was a fall in Energy Supply emissions (-1.4 MtCO2e; an 18.9 per cent reduction). This was driven almost entirely by the complete removal of coal-generation from the power generation sector Other sectors exhibited a range of minor changes between -0.3 and +0.3 MtCO2e which, when considered together, essentially cancelled each other out.

Between 1990 and 2017, there was a 46.8 per cent reduction in estimated emissions, a 35.6 MtCO2e decrease. The most significant contributors to this reduction were:

More details can be found in Section B. 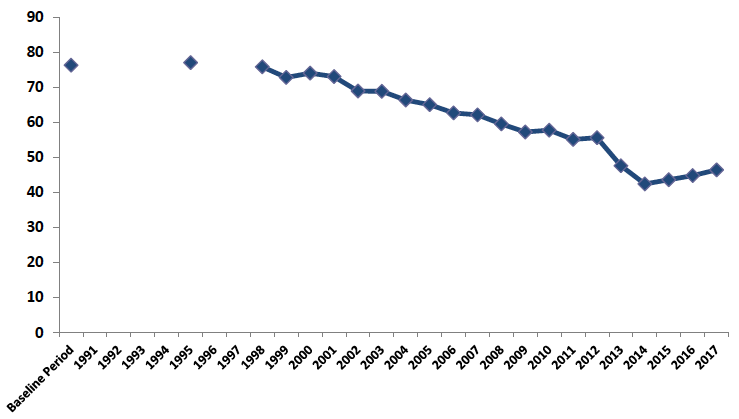 Note that as part of this release all of the figures have been revised since the previous publication in June 2018, to incorporate methodological improvements and new data. Comparing these 2017 figures with the 2016 figures published a year ago will therefore give a different year-on-year percentage change; one which is incorrect and should not be used. Details of these revisions can be found later in this statistical release in Section D.