The energy sector in Scotland is of huge economic importance. This is recognised in the 2018 Programme for Government which sets out ‘the transition to a low carbon economy’ as a key government priority.

The 2017 Energy Strategy and the 2018 Climate Change plan outline a “2050 vision” for a flourishing, competitive local and national energy sector, whilst setting specific targets for the Scottish energy system to meet by 2030:

For the purposes of this analysis, the energy sector is split into two distinct sub sectors, energy support, which is predominately companies providing support to the offshore oil and gas sector, and mining and utilities.Oil and gas exports, as carried out by companies involved in the actual extraction of oil and gas, are excluded from this analysis. Given the diversity across the energy sector, it is also the case that activity within energy will be captured as part of a wider group of sectors within the Scottish economy, for example in engineering and advanced manufacturing.

In 2017, the Energy sector accounted for 0.8 per cent of total registered enterprises in Scotland

Source: Inter-departmental Business Register (IDBR). Proportions may not sum to 100 due to rounding.

As above, activity in the energy sector is likely to be included within a wider group of sector activity. Oil and Gas UK estimate that, including indirect and induced employment, around 110,000 jobs in Scotland were supported by the oil and gas industry at the end of 2018. In addition, figures published by ONS indicate that the Scottish low carbon and renewable energy sector supported over 46,000 jobs in 2017. 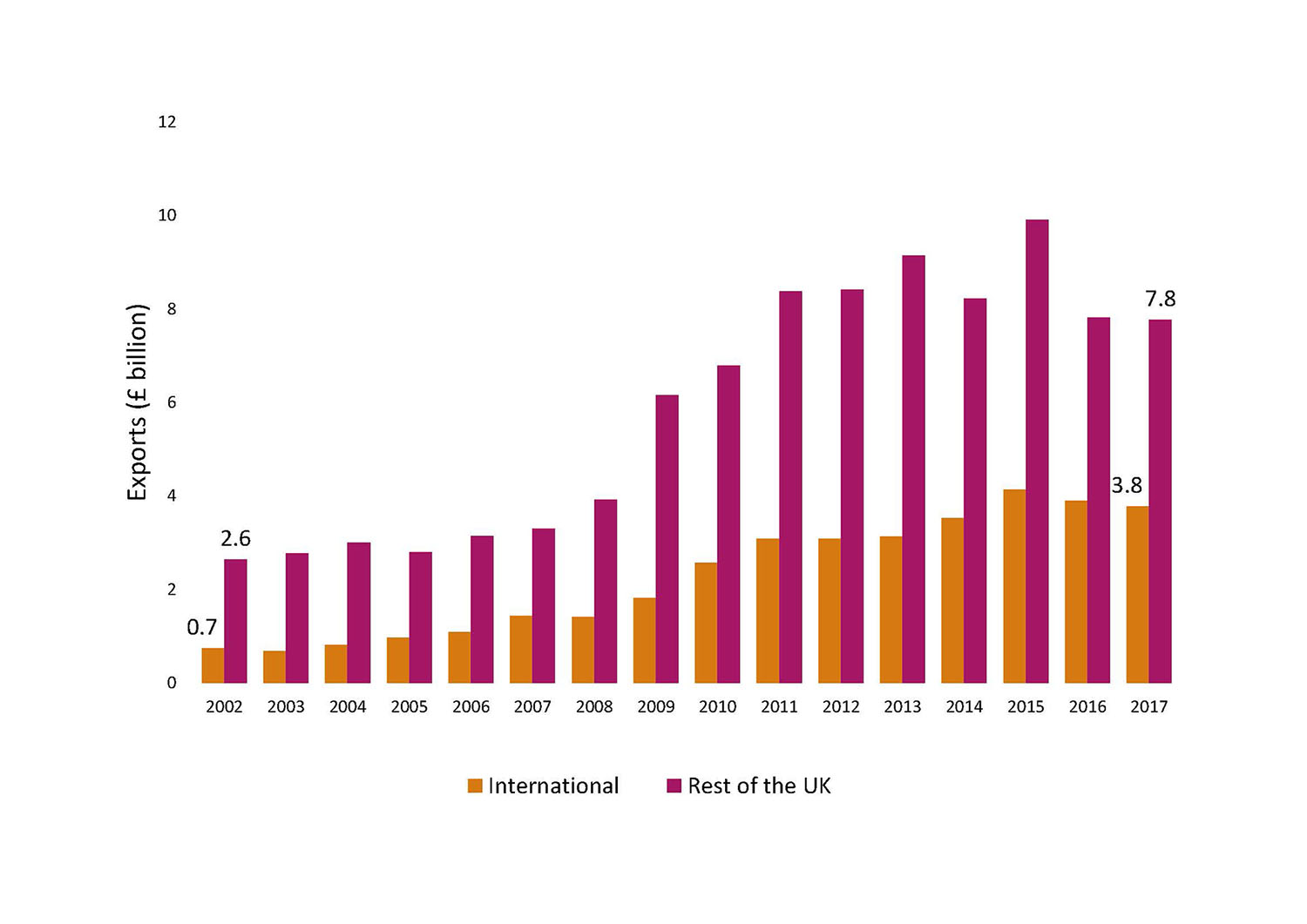 In 2017, the energy support sub-sector accounted for 91.6 per cent (£3.5bn) of international exports from the energy sector. Exports from this sector have increased significantly over time. However, there have been signs of weaker growth in recent years (Figure 2). 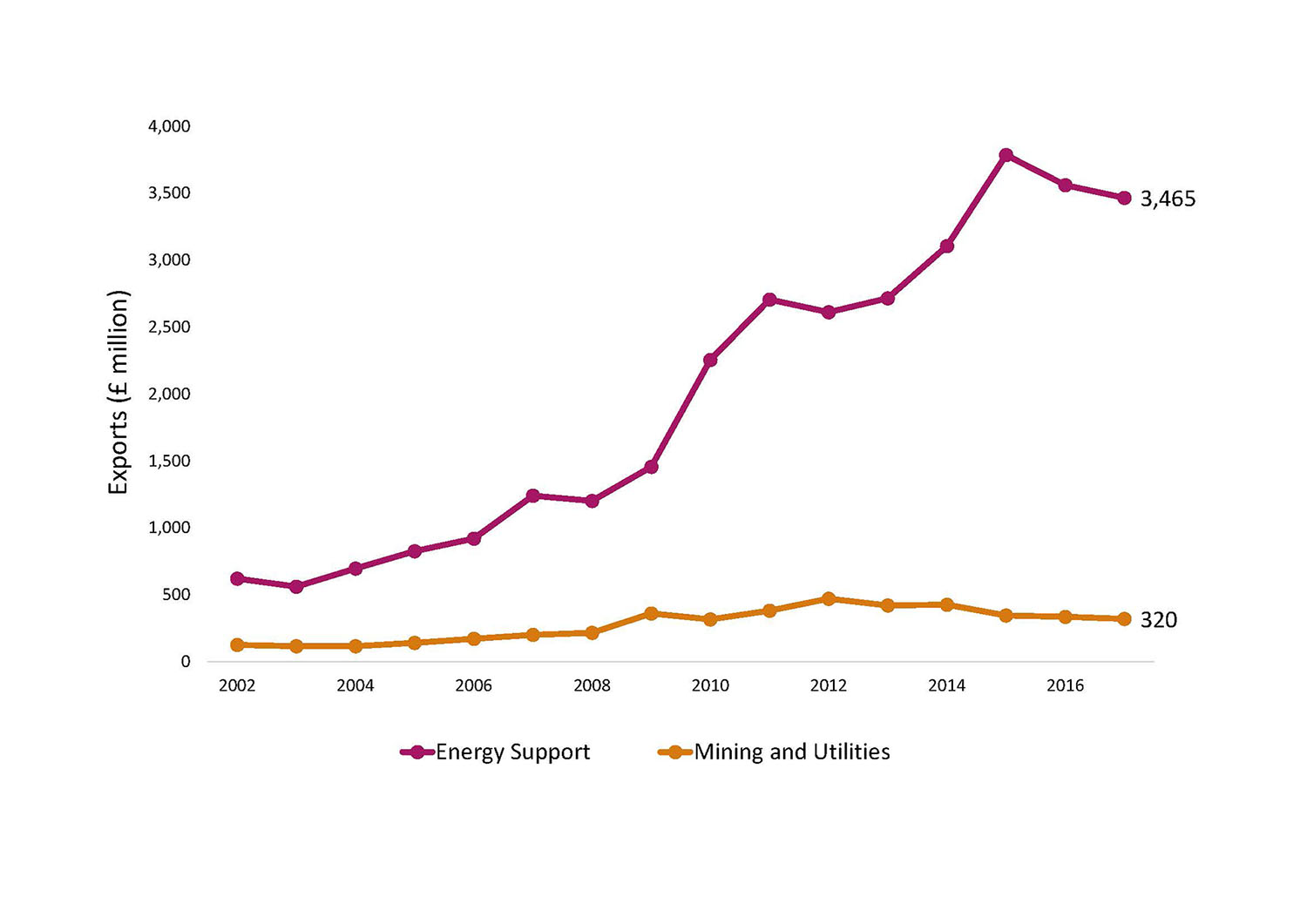 Export Performance by Sub-sector – Rest of the UK 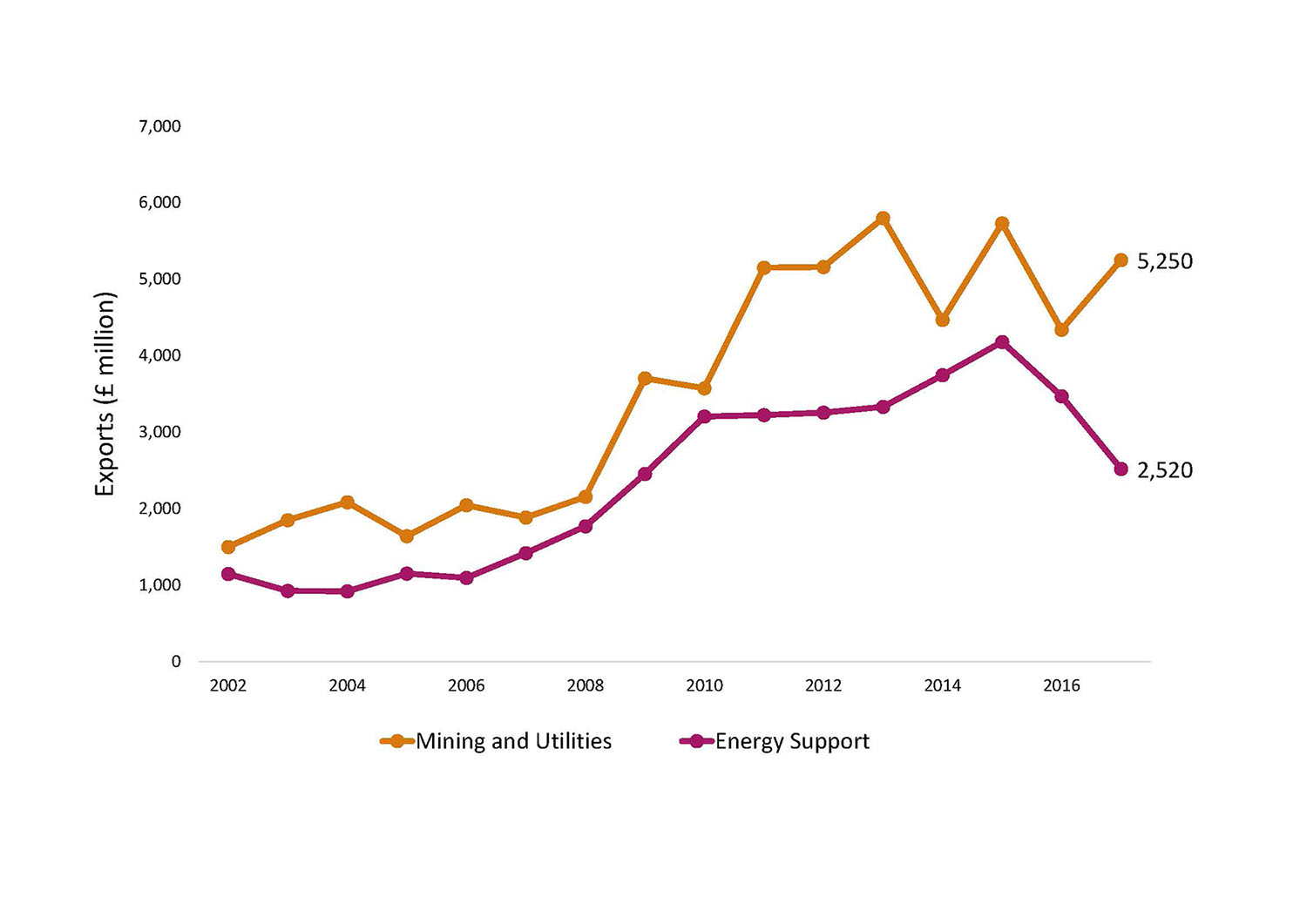 In 2017, the top five international markets for the Energy exports overall were: • Brazil

The top five international export markets vary between the sub-sectors, a more detailed breakdown is provided below (Table 2).

Analysis carried out for the Export Growth Plan identifies 15 priority markets in which there are significant opportunities to increase Scotland’s exports as well as a further 11 where there are more specific sectoral opportunities. Table 3 below breaks down these opportunity markets for energy exports:

Actions We Will Take

− Supporting the oil and gas supply chain trend in diversifying internationally to grow their businesses.

− Increase the number of active exporters in the sector in Scotland by stimulating greater ambition to export.

In total, more than 30 organisations have been consulted in the development of this plan. These consultations have helped to shape the plan and have helped us to make links to other relevant work within individual sectors.

While we are not able to reflect all the comments and input we received through these consultations, some pertinent points from key consultees in this sector are captured below.

Key consultees in this sector included Scottish Renewables and the Energy Industries Council. All consultees were supportive of the development of the plan and highlighted the strengths that they see in the sector in Scotland, in particular the skill base, the transferability of experience in the North Sea to other disciplines and the global reputation that Scotland enjoys within the sector. All stakeholders pointed to the global nature of the energy challenge with every country in the world seeking to make the transition to being a low carbon economy and most making commitments to decommission existing nuclear sites. All stakeholders agreed that Scotland is well positioned to respond to these opportunities and highlighted the importance of government-to-government relationships in supporting this.

All stakeholders identified the challenges and limitations of data with the rigid nature of SIC codes not providing the most helpful guide to understand the breadth of activities and subsectors in which a single business may operate.

(1) For some sub-sectors, the values at a destination country level are less robust. Where this is the case they have not been included in this table.