Contents
Practising Realistic Medicine: Chief Medical Officer for Scotland annual report
Section 2 - A Summary Of The Health Of The Nation 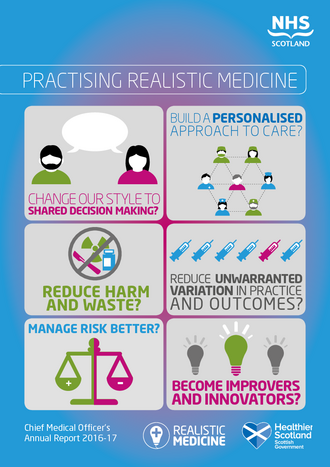 Section 2 - A Summary Of The Health Of The Nation

This section will provide an overview of some of the key trends in Scotland’s health in recent years. It includes new data from the recent Scottish Burden of Disease Study and the Scottish Primary Care Information Resource ( SPIRE). It also highlights some of the ongoing priorities for Scotland, emerging challenges, public health success stories and frontiers for further development.

Figure 14. Between 2001 and 2016, the overall death rate (labelled EASR) continued to decline – but this decline showed a plateau in recent years. Inequalities in death rates between socioeconomic groups (shown by the RII measure) increased over this period.

Figure 15. This infographic from the Scottish Burden of Disease study illustrates what conditions we are living with, and dying from, in Scotland. The size of each “bubble” is proportionate to the rate of death and disability caused by that condition. You can view the image in more detail at: http://www.scotpho.org.uk/media/1450/sbod2015-bubbles.pdf

Burden of disease in Scotland, 2015

Figure 16. Rates of ill-health and premature mortality in Scotland show a clear “gradient” by socioeconomic circumstances, with greater socioeconomic deprivation associated with a greater burden of disease.

Source: Scottish Burden of Disease Study, 2015. SIMD 1 represents people living in the 10% most deprived areas in Scotland, whilst SIMD 10 represents people living in the 10% least deprived areas. Rates of both YLD and YLL are standardised for age using the European Standard Population, to account for differences in age structure between SIMD deciles. Results have been rounded to the closest thousand and may not exactly match other published figures.

Figure 17. These new data from the Scottish Primary Care Information Resource ( SPIRE) primary care project in Scotland illustrate that the prevalence of multi-morbidity (having more than one long-term health condition) increases with age. Among people 70 years and older, the majority are living with multiple long term conditions.

Health of the Nation Snapshots

This section builds on the overall picture described in the preceding section by picking out some more detailed snapshots of Scotland’s health - each of which serves to illustrate an ongoing challenge, emerging concern, or success story for Scotland’s health.

The intention of these snapshots is to provide a detailed insight into selected trends and to provoke discussion about how we might use these data to improve the health of our nation.

Figure 18. The prevalence of diabetes in Scotland has risen in recent years: most of this increase is due to type 2 diabetes.

Figure 19. The percentage of working-age adults aged 16-64 with a GHQ-12 score of 4+ (indicating possible mental health problems), has increased in recent years among people from households in the lowest income quintile, but not among those in higher income households.

Figure 20. The prevalence of moderate to high anxiety has increased markedly in recent years among adults living in households receiving income from Income Support or Job Seeker’s Allowance, but only slightly among those who do not. This has been linked to changes in the benefit system.

Smoking remains the biggest individual-level risk factor for morbidity and mortality in Scotland. Around 10,000 deaths (around a fifth of all deaths) and 120,000 hospital admissions in Scotland are smoking related. Smoking kills half of all regular smokers, and people in our least well-off communities are three times more likely to smoke than people in our best-off communities. This distribution and the high cost of smoking (averaging out at over £2,000 per year per smoker) has a significant on-going social, economic and health inequalities impact.

Scotland has made great progress in protecting people, especially children, from the harms of tobacco smoke and in smoking prevention – halving the rate of reported exposure among children to second hand smoke and reducing smoking levels among school-age children to an all-time low. Greater emphasis is now needed in encouraging more smokers to quit. The challenge is to get more smokers to seek support from NHS stop-smoking services - where their likelihood of success is more than doubled compared to trying to quit without support. Beyond encouraging more smokers into services we also need to ensure there is consistency of treatment options and consistency of advice available across Health Boards and their community pharmacies – 70% of all smokers using NHS services do so through community pharmacies.

Figure 21. Deaths caused by the acute effects of drugs have risen in recent years, and in 2016 were at the highest level ever recorded in Scotland.

Figure 22. About 1% of the Scottish population over 16 years of age are estimated to be problem gamblers. The prevalence is highest among young men.

Figure 23. The percentage P1 children in Scotland with no evidence of dental decay has risen substantially between 1988 and 2016.