Increase the proportion of people diagnosed and treated in the first stage of breast, colorectal and lung cancer by 25%.

Cancer survival is a key measure of the effectiveness of health care systems.

The earlier that cancer is diagnosed and treated, the better the survival outcomes. Although cancer survival has improved, the UK still lags behind performance in other European countries. Improving the percentage of early stage diagnoses will mean fewer premature deaths from cancer and this will have a positive effect on overall life expectancy in Scotland.

Scottish Government and NHSScotland aim to address this in the Detect Cancer Early programme and improve survival outcomes for people with cancer to amongst the best in Europe. Breast, colorectal and lung cancers were chosen to be included as they are the most common in Scotland accounting for 45% of all cancers in 2011. This LDP standard will be used as a proxy indicator of survival outcome and as a lever for whole systems approach to improvement with a continued drive to improve on the current high quality cancer service provision and patient and carer experience.

Cancer staging is the process of determining the extent to which a cancer has developed and spread, on a scale from 1 to 4. ‘Stage 1’ represents the earliest stage of detection, and patients diagnosed at this stage have better associated outcomes.

Further information on the rationale behind the choice of data source and calculation of the standard baseline can be found in the Technical Note below. A letter was also sent to the Health and Sport Committee of the Scottish Parliament to coincide with the publication of Cancer staging statistics and the Technical Note (second link below).

The graph below shows national performance of the Detect Cancer Early standard since combined calendar years 2010 & 2011. 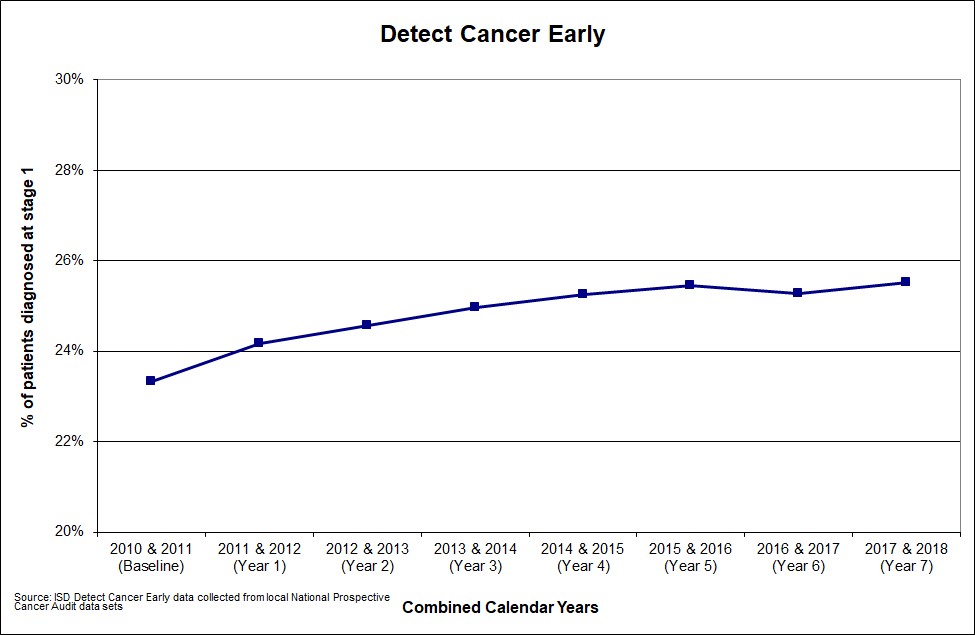 The table below shows the percentage of people diagnosed and treated in the first stage of breast, colorectal and lung cancer, by NHS Board, for combined calendar years 2017 & 2018.