This standard helps tackle hazardous and harmful drinking, which contributes significantly to Scotland's morbidity, mortality and social harm. Latest data suggests that alcohol-related hospital admissions have quadrupled since the early 1980s and mortality has doubled. The cost of alcohol misuse to the Scottish economy is estimated at between £2.47 billion and £4.64 billion per annum (with a mid-point of £3.56 billion).

Brief interventions have been proven to be a highly effective and evidenced-based early intervention for those individuals (for those currently over the age of 16) who are drinking at hazardous and harmful levels to moderate their level of drinking and thereby reducing their risk of developing more serious alcohol-related problems. Brief interventions provide an important opportunity to highlight potentially harmful behaviours and provide individuals with the tools to make informed choices about how they drink and reduce the risk to their health.

Given the momentum and national profile established in Scotland, we would expect high levels of ABI delivery to be maintained and should remain a core component of local strategies to reduce alcohol-related harm. The establishment of the ABI LDP Standard accords with the long-held vision that ABIs should be embedded in routine practice and allows for diversification across a wider range of settings, in line with the ABI LDP Standard guidance, to develop the evidence base.

The standard is that NHS Boards and their Alcohol and Drug Partnership (ADP) partners should maintain the same total level of target delivery of ABIs as under the HEAT H4 target for 2011-12 (i.e. 61,081 ABIs nationally). It is expected that at least 80% of delivery (i.e. a minimum of 48,865 ABIs) will continue to be in the priority settings.

The graph below shows national performance on the ABI standard since 2011/12. 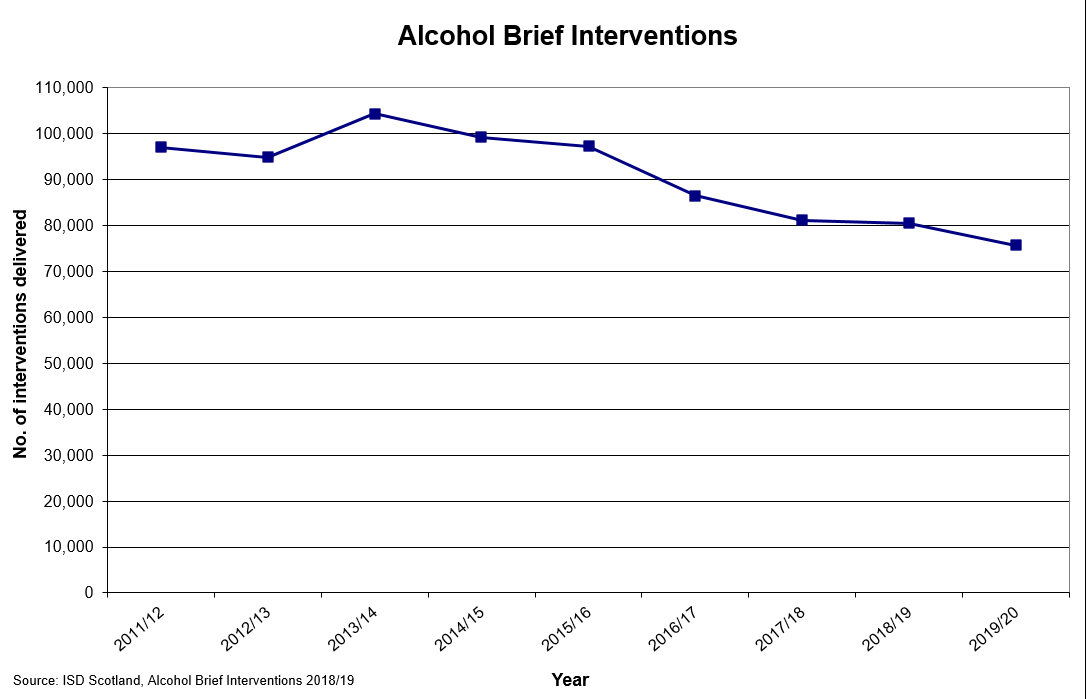 The table below shows the number of alcohol brief interventions, by NHS Board, for financial year 2019/20.

Changing Scotland's Relationship with Alcohol: A Framework for Action (webarchive.org.uk)