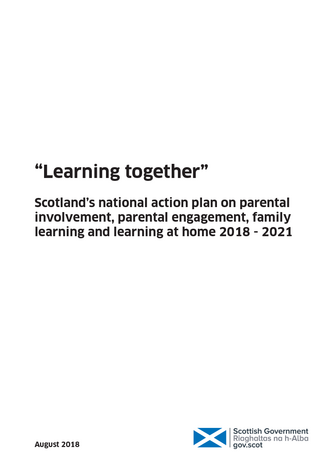 There is a national association, Comann nam Pàrant ( CnP), for parents with children in GME. CnP operates both on a local level and on a national level. It has local committees which are usually formed around current GME provision and a national function which includes a national officer and a national committee and chair. The local committees have a focus on the provision and growth of GME at a local level. The national function also has an interest in local matters but with the added aim of representing these concerns at a national level. CnP also holds an annual conference for all CnP members. Bòrd na Gàidhlig provides funding for CnP and also has a role in supporting parents with children in GME.

The body, Storlann Nàiseanta na Gàidhlig is funded by both the Scottish Government and Bòrd na Gàidhlig. Its principal function is to provide resources and support for pupils and teachers at all levels in Gaelic education. Storlann also has an important role in supporting parents with children in GME. This is by means of its website and telephone support line Gaelic 4 Parents. More recently Bookbug has been a valuable initiative for introducing parents and children to Gaelic learning.