Geothermal energy harnesses heat that occurs naturally below the ground surface. Heat is present within the Earth due to processes that relate to the formation of the planets and the natural decay of radioactive elements. Humankind has long taken advantage of geothermal waters where they naturally emerge on to the Earth's surface. Spa towns were often built around zones where faults have provided pathways for easy harnessing of hot geothermal fluids - although many Victorian spas exploited springs of indifferent temperature (e.g. at Strathpeffer and Bridge of Allan). Modern geothermal energy developments do not rely on natural springs, however, but engineer the subsurface to sustainably exploit the renewable heat contained in the Earth's crust.

Deep geothermal schemes exploit hot waters captured at depths of anywhere between 300m down to 5km. Although this appears deep, these depths are still well within the uppermost portions of the Earth's crust (the solid "outer skin" of our planet which rests upon the partially molten high-temperature, high-pressure zone of the Earth's mantle). The crust is made up of many different tectonic plates, with boundaries separating them. The movement of these tectonic plates causes crustal thinning and collision zones creating tectonically derived geothermal hotspots such as Iceland or New Zealand, both of which are significantly exploiting their geothermal resources. However Scotland (and UK) is in the middle of the Eurasian plate far from any tectonically derived hotspots; this has the benefit of a lack of major geological hazards such as large earthquakes or volcanoes, but at the cost of more modest geothermal potential. Such seemingly unfavourable conditions have meant that little progress has been made in exploiting geothermal in Scotland. Nevertheless, there are significant resources to be explored, and similar resources are now being targeted elsewhere in the world; these are generally referred to as low to mid-enthalpy systems (Younger 2014) due to the generally cooler temperatures compared to other tectonically derived resources such as those in Iceland.

The heat that we could harness under Scotland comes from two main sources (1) heat conducted from the mantle below the Earth's crust and (2) heat produced within the crust by decay of radioactive elements. Additionally, heat can also be distributed and placed in the upper crust of Scotland due to convective flow of hot ground water from depth.

The granites of the East Grampians have long been known to host high concentrations of the radioactive elements potassium (K), uranium (U), and thorium (Th) (Downing and Gray 1986, McCay et al. 2014). These granites were investigated previously by drilling heat flow boreholes (Figure 1). Temperature measurements in these boreholes found that the radioactive heat production significantly increases their geothermal gradient compared to the surrounding metamorphic Dalradian Supergroup rocks. However the geothermal gradient appeared not to be as high as in other UK high-heat production granites (Downing and Gray 1986). As such, the East Grampian granites were not further pursued as a geothermal resource during the studies in the 1980s, because the exploration paradigm at the time was solely to find locations suitable for the production of electricity - which is a much more challenging ambition in the UK.

Figure 1: Location of granite bodies in north east Scotland and the heat flow boreholes used to estimate geothermal potential (modified by Rob Westaway from Fig. 2.1 of Wheildon et al. (1984), and used with his permission). NB Areas shown as 'Moine' rocks south of the Great Glen Fault should be white - this colour indicates Dalradian and other metamorphic rocks. 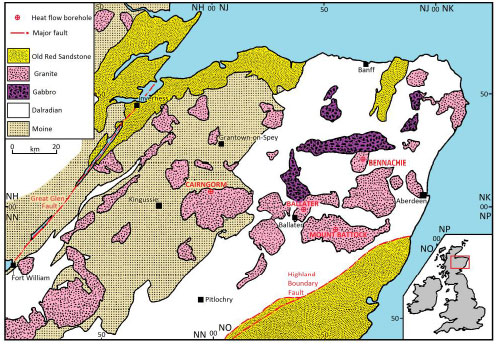 More recent reappraisal of the apparently disappointing geothermal gradients in the East Grampian granites has restored their attractiveness for geothermal prospecting, by accurate accounting for the remnant effect of the last ice age, which led to an underestimation of the geothermal gradient from the few available measurements from relatively shallow boreholes in the region (Westaway and Younger 2013, Busby et al. 2015).

A geothermal development involves drilling to the appropriate depth to extract the geothermal heat. In granite the heat is primarily contained within the rocks so we must use the circulation of fluids to extract the heat; by using the geo-fluids as a heat exchange medium. If these heated fluids were merely extracted, like an oil or gas reservoir, then the geothermal reservoir could suffer excessive drawdown and performance would be significantly affected. Therefore sustainable geothermal schemes use borehole-doublet systems, which consist of pairs of boreholes, one used for abstraction, the other for re-injection (Figure 2). As the fluid is circulated between the boreholes it picks up the heat from contact with the rock. Pressure is maintained in the system by re-injecting the fluids after their heat is extracted by a heat-exchanger at surface. The rate of injection and production of fluids can be designed to be in balance with the natural heat replenishment in the subsurface to ensure that a geothermal scheme has a lifespan of several decades before major refurbishment is required.

Figure 2 shows a schematic of a generic geothermal borehole doublet system. To illustrate the scale of the depth of the operations the Troll A Oil Platform and Castlegate (on Union Street, Aberdeen) are shown at the land surface on the image. The left box shows a likely transit pathway for fluid as it flows through the rock from an injection borehole to a production borehole. As the water flows through the rock it warms up as it picks up the naturally occurring heat. The example here does not show any fractures or faults in the rock, however these would be likely to be naturally present within the granite and would create a more complicated fluid flow pathway between the boreholes.

Drilling is required to access the depths where the geothermal sources are located. The techniques used in geothermal drilling are similar to those of oil and gas exploration and production. Temporary drilling rigs (an example of which is shown in Figure 3a) are required to be on site during exploratory and production drilling. This process can take several weeks. Once the drilling is completed the rig is removed and a permanent well head is left in place. Figure 3b shows an example of a wellhead from the Southampton geothermal scheme. Here, the wellhead is unobtrusively located in a commercial car park.

Figure 3: (a) Geothermal drilling in Newcastle upon Tyne in 2011 (b) Geothermal wellhead at the Southampton scheme. This photo was taken during maintenance work; usually the wellhead is encased in insulation and is even less conspicuous. 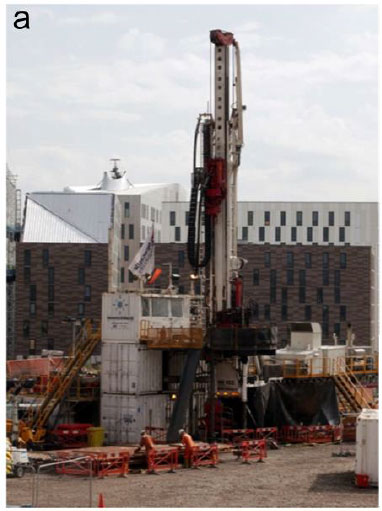 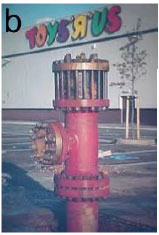