This chapter sets out a concept of what an ideal outcome of deep geothermal exploration at Hill of Banchory would mean.

A trail-blazer for the deep geothermal sector in Scotland

The granites in the north east of Scotland undoubtedly contain large amounts of thermal energy suitable for exploitation as low-carbon, renewable heat. For that energy to be exploited commercially, the right combination of temperature and permeability must be present. Without actually drilling into the deep rock we cannot establish with certainty the quality of the geothermal resource. At present, we do not know if the Scottish granites offer exceptional geothermal potential, or something less attractive.

A deep geothermal borehole at Banchory would greatly improve our understanding of the deep geothermal potential of the Grampian granites. These extend over a large area of the country (see Figure 24) and could potentially represent a significant future energy resource for Scotland as a whole. 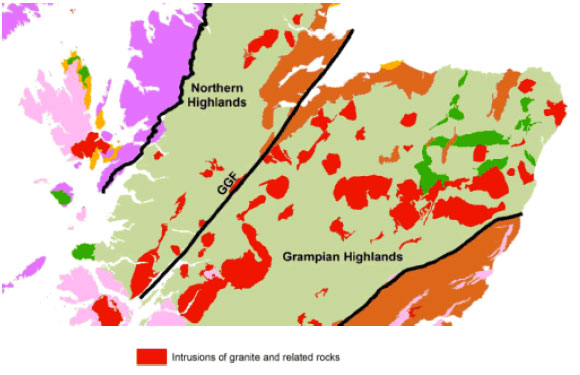 It is hard to put a figure on the overall energy potential of the Scottish granites, but the Weardale Granite underlying parts of the Pennines (which has no surface outcroppings) is estimated to have a heat potential of 9,000 MW - in other words, it produces as much heat in a year as Scotland's total annual heat demand. While only a fraction of that could be exploited commercially, the scale of this heat source strongly suggests that it is worth investigating the heat potential of the Scottish granites.

The sections below set out a vision of what would be possible if the geothermal potential at Hill of Fare proved to be good - which we have assumed to mean the well could produce 30 litres per second of water at a temperature of 75 °C. That equates to a heat source with a capacity of around 2.5 MW.

Following the successful exploratory borehole, test pumping is conducted to establish how much water can be pumped sustainably from depth. In other words, it assesses how much hot water can be pumped out before the water level in the borehole drops below an economically viable maximum depth to the pump intake. Assuming a positive outcome, the other elements of the deep geothermal heat system will be put in place, chief among them the reinjection borehole. This will carry the geothermal water back to depth after useful heat has been extracted, creating a geothermal 'doublet' system. This is a typical arrangement for a deep geothermal heat system, and found widely in areas such as Iceland, Central Europe or Eastern Paris, where geothermal heat use is relatively common.

The visual intrusion represented by the surface elements of the geothermal system will be extremely small. The building will be roughly on the scale of a two car garage, and can be designed to fit into the landscape. There will be no emissions of steam, or any other gases, as the geothermal boreholes will be a closed system. The piping carrying the water to and from Banchory will be buried where necessary to minimise visual intrusion.

Overall, the geothermal system should be so low key it could be overlooked entirely. Though this may seem unrealistic, the panorama of an urban area in Reykjavik (Figure 25) includes five geothermal wellheads with a total capacity of around 10 MW.

Figure 25: Geothermal wellfield in Reykjavik. The wells are in inconspicuous cabins about the size of bus shelters

At the energy centre the hot water piped from the production borehole effectively becomes a 2.5 MW heat source that generates heat nearly continuously (in many existing systems the system loading is in excess of 90%, with down times for maintenance etc. scheduled in for periods of low demand). By making use of the existing heat stores already present in the HOBESCO system, demands of up to 5 MW peak can be met, ensuring that the heat from the well is used with high efficiency. Gas boilers, which are already in place, act as a back-up and for covering exceptionally high demand peaks.

Although the input temperature of 75°C is marginally too low to be used in much of the existing network without some boosting, the space heating systems across the later expansion stages of the Banchory heat network have been designed to accommodate the slightly lower temperatures coming from the geothermal well.

Operation and maintenance costs for the geothermal heat system are low. Thanks to the support from the Renewable Heat Incentive the price of heat to the network (and to the network's customers) is competitive and also highly stable; as the main input cost of a unit of heat is the financing of the boreholes and connecting piping, it is not exposed to the volatility of fossil fuel markets. After the capital costs have been paid off, the network will become a long-lived, fully sustainable low carbon energy asset able to supply very cheap heat.

A key advantage of a geothermal system is longevity. Although the pump and other small elements will need replacement every 10-15 years, the boreholes themselves should be very long lived and could potentially supply heat to Banchory for the rest of the century. The oldest geothermal heat system in the world in Boise, Idaho has been operating since the 1890s.

The carbon intensity of deep geothermal energy is recognised as very low, especially for heat generation. 1 MWh of geothermal heat will give rise to fewer carbon emissions even than biomass or solar heating, and much less than 1 MWh of fossil fuel heating. Our calculations suggest that geothermal heating at Banchory, on a 'central' case of assumptions, will be 18 times less carbon intensive than natural gas heating (which is the least carbon intensive of the fossil fuel heating technologies). A 2.5 MW well running at a gross annual loading of 60%, and replacing gas heating, would deliver an annual saving of around 2250 tonnes of CO 2.

A template for other geothermal systems across Scotland

Once the practicality - and commercial validity - of a deep geothermal well utilising the heat from deep granite was established, the potential for rolling out similar projects across the NE of Scotland would be large. Each system would use only a small proportion of the available geothermal energy; and, as knowledge of the deep geology of the granite increased, risks - and thus financing costs - would reduce.

In time, deep geothermal systems could come to provide a core element of low carbon, sustainable and competitive heating for a significant number of Scots, contributing towards carbon emission reduction targets and improving energy security.