9. The potential market for a geothermal well; heat demand in Banchory

An essential element in any large scale heat generation project - renewable or otherwise - is availability of a suitable customer. Since there is no national heat grid (as is the case for electricity), establishing - with a high degree of confidence - local, secure heat loads must be a priority.

The Hill of Banchory ( HOB) heat network is the most proximate potential customer for a geothermal well at Hill of Fare. In this chapter we assess the existing network demand (current and planned), and assess heat demand in the wider area of Banchory to determine other possible network opportunities that could either be developed in tandem with, or separately to, the HOB scheme, using data from the Scotland Heat Map.

The current extent of the existing Hill of Banchory Network has been explained in Chapter 3. Future planned expansions for the Network are shown in Figure 26.

Estimated heat demand for future developments in the Hill of Banchory Network are shown in Table 7.

Table 7: Future Expansions for the Hill of Banchory Heat Network

It can be seen that over the next five years a substantial amount of new demand is planned to be connected to the HOB network, making full use of both the currently operational 900kW biomass boiler and the yet to be commissioned 700kW biomass boiler. The planned increase in demand is analysed in more detail below to determine whether the existing biomass capacity is likely to be sufficient to supply all of this demand, or whether another source of heat - for example geothermal - will be needed.

The Wider Heat Potential in Banchory

The town of Banchory presents a large source of heat demand, approximately 85,000MWh in total.

A heat demand density analysis was performed to determine heat demand per square metre, measured in kWh/m². This is a good early stage indicator of which areas will be best suited to district heating, as a high heat demand density suggests less pipe is required to supply the properties, resulting in a higher Linear Heat Density ( LHD) [5] (Figure 27). 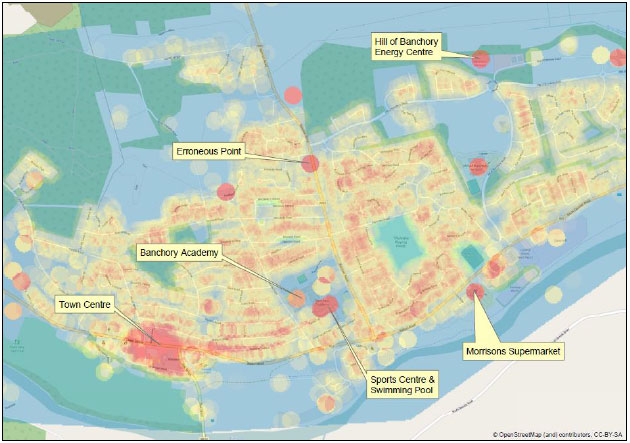 In this analysis, each point is represented by a circle that is assigned a value according to the heat demand of that point. Where the circles of more than one point overlap, the demand is summed and the result of these points and summations are then colour coded from lowest (blue) to highest value (red). An erroneous point is not considered in any analysis.

As can be seen, there are some clear "hot spots" around Banchory, including some clusters of buildings in the town centre, and some large individual demand points such as the sports centre and the swimming pool. These areas were chosen to be the main focus points for proposed network designs and will be covered in more detail in the following chapter.

The majority of residential properties in Banchory are privately owned. There are Council-owned properties in the Raemoir housing estate which is sited close to Banchory Academy, a Primary School, a care home, and Banchory Sports Centre. These types of buildings are usually ideal candidates for connection to a DHN as they provide large, reliable sources of demand (often referred to as "anchor loads") that provide baseload demand on the Network; particularly the swimming pool that requires almost constant heating. Connecting to Council-owned properties helps the Council reduce its carbon emissions and can assist in reducing fuel poverty amongst tenants. Councils may also be able to avoid building fabric upgrade costs by connecting to a Heat Network.

A preliminary appraisal of the network's demand

Once the shape of heat demand across Banchory had been identified and prioritised, preliminary network layouts were drawn using ArcGIS. These networks targeted all of the key points of heat demand that had been shown in the analysis of the heat map data. The demand throughout Banchory is quite varied, which is a good thing for a district heating network as the different load types will help to flatten out the overall network demand profile throughout the day. This effectively raises the baseload threshold, meaning more of the heat could come from the geothermal source (which will produce heat at a constant rate). 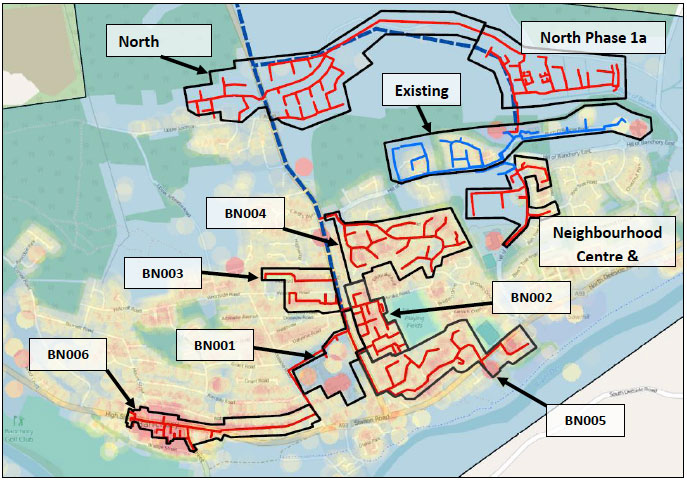 Banchory Academy and the surrounding area present a good source of demand as it consist of several large buildings concentrated into a small area. Adjacent to the school is a residential care home, sports centre and smaller Primary School. As these buildings are quite central in Banchory they would provide a good starting point from which the network could be expanded. Although it will require a large length of transmission pipe from the energy centre - probably located on the outskirts of Banchory - the length of pipe required to connect the points of high demand together would be relatively short, therefore ensuring a good linear heat density.

This first residential expansion would see the Council Properties in Raemoir Estate connect to the network. Although this area does not have a particularly high heat demand density, council housing properties are always a preferred customer of district heating networks as secure and affordable heating are an important part of providing affordable housing.

On inspection of the heat demand density analysis, it was seen that to the west of the main road into Banchory there was a patch of council-style housing that had a good demand. This was made more attractive as an option by the fact that rear access was possible to two rows of houses at once, providing a large demand for low length of pipe. This housing is most likely private so further investigation in the likelihood of connection should be undertaken before considering this option.

To the North of Banchory, lies another more modern residential area. Although this is a less closely packed area of housing, the properties tend to be larger and so the area has a good heat demand density. Once again these properties will all be privately owned so a large portion of individual connection arrangements would have to be agreed before this extension could be seriously considered.

This extension could connect the network to the local Morrisons Supermarket as well as several potential customers in the industrial estate. These large commercial demands should help to increase the load diversity on the network and could provide some stable demand and therefore income. Although the supermarket is not particularly close to the previous network stages, there is a well suited path through another residential area with a good heat demand, meaning no pipe is wasted on transmission only.

Extension to Banchory town centre is the furthest away from the initial branch at the High School, but is also one of the largest sources of demand. The town centre has a large commercial demand, including retail, restaurants and hotels. Along with the densely packed residential properties, this could provide a concentrated demand for the network that would make up for the length of pipe required to reach it. The extension would also have the option of supplying some more residential properties along the way to help increase the overall linear heat density.

Ramboll's District Heating Opportunity Assessment Tool ( DHOAT), developed for the Scottish Government, was used to analyse the heat map data and preliminary network designs. This tool provides clear indications of what the peak and annual demands would be at each stage of the network's development, as well as a preliminary set of KPI data including:

The results are shown in Table 8.

Table 8 shows the potential connections which are quite similar in terms of heat demand and linear heat density. Typically any network with a linear heat density greater than 3 could be viable, though it should not be assumed that values lower than this have no potential. BN001; the network supplying the Academy and surrounding buildings, yields the highest linear heat density of 8.0, showing how a large single consumer can improve the performance of a Network.

Given their large linear heat density, relative proximity to a new geothermal network connection, and the benefit of single tenure, BN001 and BN002, are most favourable for initial development.