Good equality evidence is key to the performance of the Public Sector Equality Duty. We are committed to improving the gathering, collation and use of equality data. New developments since the 2015 report are described below.

Since the 2015 report the SSCQ has gained 'Official Statistics' status and is now the key annual source of equality data in Scotland. SSCQ enables the production of reliable and detailed information on the composition, characteristics and attitudes of Scottish households and adults across a number of topic areas including equality characteristics, housing, employment and perceptions of health and crime.

The latest statistics from the SSCQ, published in November 2016, relate to the 2015 collection period. Statistics from the 2014, 2013 and 2012 collection periods have also been released as Official Statistics. The main analytical report for the 2014 data focused on equality group themes and provided analysis of the differences between groups, sub-national areas and changes over three years.

Scottish Government equality analysts used the SSCQ data to inform its report 'Sexual Orientation in Scotland 2017 - A Summary of the Evidence Base' [2] which was released in January 2017. This report examined the differences between heterosexual adults in Scotland and those who self-identify their sexual orientation as lesbian, gay, bisexual or other in major household surveys.

The census is the most comprehensive source of equality data in Scotland, allowing for detailed analysis by equality group and sub-national geography. Following the release of the census datasets in 2014, Scottish Government statisticians carried out a large equality analysis, producing a series of tables and reports. Since the 2015 report further reports were published using the 2011 Census data:

1. Gypsy Travellers in Scotland - A Comprehensive Analysis of the 2011 Census [3] . This report provides a comprehensive and wide-ranging evidence base on Scotland's Gypsy Travellers. It presents analysis of key areas such as health, education, housing, transport and economic indicators to reveal important information on the lives and life chances of Gypsy/Travellers.

2. Which Ethnic Groups Have the Poorest Health? [4] This report examines differences in the health of ethnic groups in Scotland and uses census health data to identify variations between groups. The analysis employs age-standardised rates to compare people of similar age, which avoids the often misleading direct comparisons between populations with very different age structures.

National Records of Scotland ( NRS) carried out a 2021 Census topic consultation and published a report [5] of the findings in August 2016. In addition to the equality topics covered in 2011, this consultation identified a user need for information on sexual orientation and gender identity. NRS is working closely with the Office for National Statistics ( ONS) and stakeholders to further explore the need for data on these topics. Public acceptability testing took place in early 2017 and stakeholder workshops were held to further explore the need for this data with users.

The Scottish Government Equality Evidence Finder [6] is a key resource for the Scottish Government, public authorities and other organisations to find equality evidence to inform policy and decision making. Since the 2015 report we have improved consistency across the site and added user-friendly inforgraphics to make the statistics more engaging for users. The pages are kept up-to-date by a network of Scottish Government analysts.

This online resource, first published in April 2015, aims to help public authorities source and use equality evidence to meet requirements of The Equality Act 2010 (Specific Duties)(Scotland) Regulations 2012. This evidence can be used for: reporting progress towards equality outcomes; equality mainstreaming; and reporting information on employees. The resource was updated in August 2016 - it can be used by public authorities to help develop new outcomes and prepare for reporting in April 2017.

The Fairer Scotland Action Plan [8] committed the Scottish Government to publishing an Equality Evidence Strategy 2017-21, based on consultation with equality groups and other stakeholders, setting out how it is going to improve equality evidence and analysis in Scotland. This strategy will be published in Spring 2017.

New Perspectives On The Gender Pay Gap: Trends And Drivers [9]

Scottish Government analysts released a report in June 2016 which explains the different measures of the Gender Pay Gap and considers how it has been changing over time. It also considered underlying drivers and described Scottish Government policy intended to help encourage the decline of the pay gap.

The index will bring together indicators relevant to gender equality and economic growth and track progress over time. Our methodology will be based on the Gender Equality Index published by the European Institute for Gender Equality ( EIGE). We hope to publish the first index in Spring 2017.

In line with the EIGE index, it will cover the following key themes

The Scottish Government is consulting on a new set of national outcomes for the National Performance Framework to meet its obligations in the Community Empowerment (Scotland) Act 2015, Part 1. The Act places a duty on the Scottish Ministers to consult on, develop and publish a set of national outcomes for Scotland. The Scottish Ministers must also regularly and publicly report on progress towards these outcomes and review them at least every five years. They must have regard to the reduction of inequalities of outcomes which result from socio-economic disadvantage when setting the outcomes. Equality organisations are involved in this process.

We have tackled the significant inequalities in Scottish society

We have improved the life chances for children, young people and families at risk

We live our lives safe from crime, disorder and danger

We have strong, resilient and supportive communities where people take responsibility for their own actions and how they affect others

We take pride in a strong, fair and inclusive national identity

As a result of the lack of data relating to the position of women on farms, and women's under-representation in agricultural organisations, the Scottish Government did not have a good understanding of the experiences and perspectives of women in agriculture in Scotland.

The Scottish Government commissioned the Women in Agriculture research to seek to address this information gap in order to inform the development of appropriate policy interventions. The main objective of the research is to establish a baseline position on women in farming and the agriculture sector, which then will influence future policies to enhance the role of women in these sectors going forward.

The project will identify the challenges for, and potential policy tools to improve, women's participation in farming and in the leadership of the agricultural sector. The Final Report is due to be published this Spring and will support maximising the economic resources within family farms, making direct policy recommendations and helping to inform the development of appropriate government policy interventions. 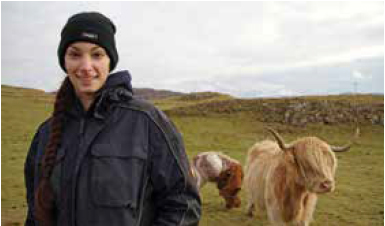 'Farming is an extremely fascinating and hugely important industry where a wide range of people from different backgrounds and with a variety of knowledge and skills come together to ensure that the ground we work can feed a nation. A lot of businesses I know rely on women taking roles of great responsibility, be it in a leading position or by working away in the background to allow for a smooth workflow of the business. …I believe gender should not be a barrier to anybody wishing to work and be recognised within the farming industry. We are all unique in our skills and abilities, irrespective of our gender, and it is that combination of skills that makes a business successful.

I therefore hope that this research project will be able to highlight the huge contribution made by women and that this will give more women the courage to step up and pursue a successful career within agriculture. If the findings are enough to convince even a handful of women to do so, then I believe the efforts put into this research are worthwhile.'