The OGP is a multilateral initiative that aims to secure concrete commitments from governments to promote transparency, empower citizens, fight corruption, and harness new technologies to strengthen governance. In 2016 Scotland was selected as one of 15 Pioneer governments bringing new leadership and innovation into the OGP at all levels of government.

The Scottish Open Government Action Plan, published in December 2016, has been developed in partnership with the civil society Open Government Network, coordinated by Scottish Council for Voluntary Organisations, and sets out how we will use the opportunity of being Pioneers to improve the lives of all people living in Scotland. It also sets out how we will learn from others and to share our experience of Open Government throughout 2017. The plan also outlines the wider work across Scottish Government in support of the Open Government agenda and how we will use the Pioneer year to ensure that government at all levels is responsive to the needs of all of our people, and we are able to make a significant move towards co-creating a more open and transparent Scotland where people have confidence in their future.

The five commitments laid out in the Scottish Plan aim to help people living in Scotland to better understand how government works so that they can have real influence and more effectively hold government to account.

1. Financial Transparency: to clearly explain how public finances work, so people can understand how money flows into and out of the Scottish Government, to support public spending in Scotland;

2. Measure Scotland's progress: by making understandable information available through the National Performance Framework, which will be reviewed to reflect our commitments to Human Rights and the Sustainable Development Goals;

4. Participatory budgeting: to empower communities through direct action ensuring they have influence over setting budget priorities;

5. Increasing participation: improving citizen participation in local democracy and developing skills to make sure public services are designed with input from users and with diversity and user needs to the fore.

The Scottish Government is working with the Equality and Human Rights Commission ( EHRC) to tackle pregnancy and maternity discrimination. This follows EHRC research published in 2015 which found that 11% of women interviewed reported having been dismissed, made compulsorily redundant, or felt that they had to leave their jobs when they were pregnant or on maternity leave. As stated in the Programme for Government, our work with the EHRC is part of continuing work with strategic partners to deliver a more inclusive workforce.

Jamie Hepburn, Minister for Employability and Training, is chairing a Pregnancy and Maternity Discrimination Working Group the remit of which includes improving employers' access to advice to ensure best practice; developing an industry-specific communications strategy around the benefits of positive pregnancy and maternity policies and strengthening health and safety advice.

"It is hugely disappointing that in 2017 pregnant women or new mothers returning to work after maternity leave should face discrimination in the workplace.

"Clearly circumstances vary but ultimately we want to ensure that no-one is forced to choose between pursuing their career or their family responsibilities. Employers need to be more flexible wherever possible and give everyone the same opportunities to work.

"Our new working group will look at how we can remove these barriers and show employers that flexible working can boost morale and productivity.

"Recent female employment figures have been positive, particularly when compared to the rest of Europe. We are closing the gender pay gap and we are making progress on the 5050 by 2020 pledge, with a number of organisations signing up. However we must not be complacent and I look forward to working on new guidance and advice with this new group so we can keep highlighting that motherhood does not detract from a worker's productivity or value."

The working group met in Glasgow for the first time in December 2016 and again in March 2017. It will continue to meet quarterly. Membership consists of representatives from the public, private, union and third sectors, including Family Friendly Working Scotland, STUC, COSLA, the NHS and Police Scotland. The group's work plan addresses issues such as improving the recruitment, retention and development of pregnant workers, as well as increasing access to flexible working when women return from maternity leave.

Read the summary of the key findings (PDF)

Read the interim report released in the Summer of 2015 (PDF)

This was recorded in the foyer of BT straight after the first meeting of the Working Group on 6 December:

. @jamiehepburn talks about the first meeting of a new group to tackle pregnancy & maternity discrimination in the workplace pic.twitter.com/jqAwTS4TZK

This was taken when Mr Hepburn met Robert Cole, Interim Head of Diversity and Inclusion, and female BT employees who have benefited from BT's positive pregnancy and maternity policies. 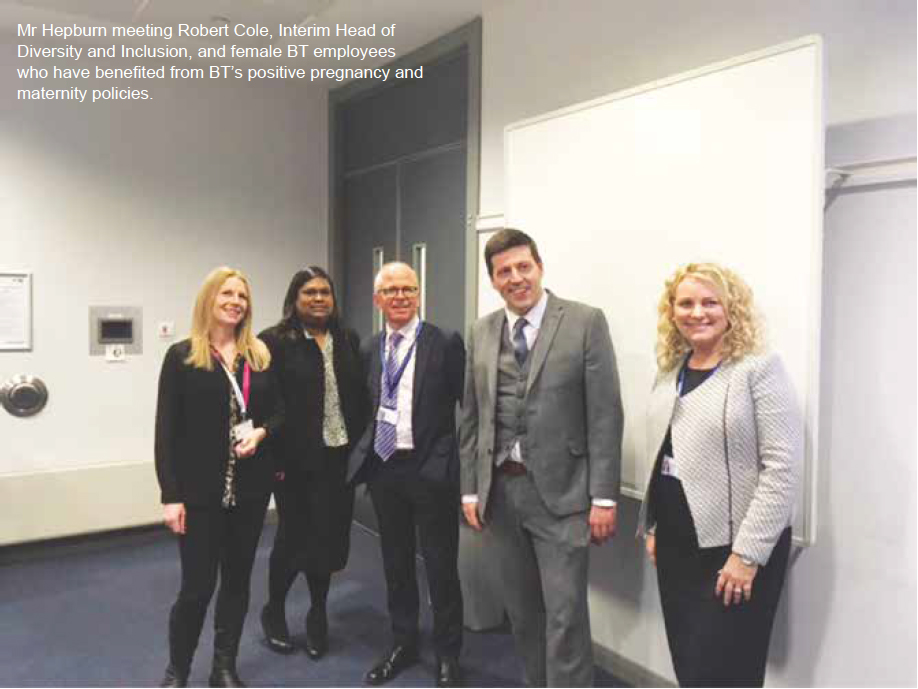 We need Scottish education to deliver excellence in terms of ensuring children and young people acquire a broad range of skills and capacities at the highest levels, whilst also delivering equity so that every child and young person should thrive and have the best opportunity to succeed regardless of their social circumstances or additional needs.

Within this broad overall aim we created the National Improvement Framework, revised in December 2016 when an Improvement Plan was also added, to galvanise efforts and align our collective improvement activities, across all partners in the education system, to address our key priorities, which are:

Key drivers of improvement will build on much of the positive work already underway in Scottish education. They provide a focus and structure for gathering evidence which can then be analysed to identify where we can make further improvements. These areas have been identified [10] to ensure that we have the right type of evidence sources which contribute to our priorities and minimise unintended consequences:

"This Framework has the potential to provide a robust evidence base in ways that enhance rather than detract from the breadth and depth of the Curriculum for Excellence. Given Scotland's previous bold moves in constructing its assessment frameworks on the best available research evidence at the time, it now has the opportunity to lead the world in developing an integrated assessment and evaluation framework." Improving Schools in Scotland:

The Scottish Government has developed a new marketing campaign to help small to medium sized ( SME) employers in Scotland recognise the benefits of employing disabled staff.

The campaign has been designed to get the issue on the radar of SMEs, through highlighting the untapped talent pool that exists in Scotland, whilst directing them to sources of information and support online.

The campaign will run across multiple channels including radio, social media and PR.