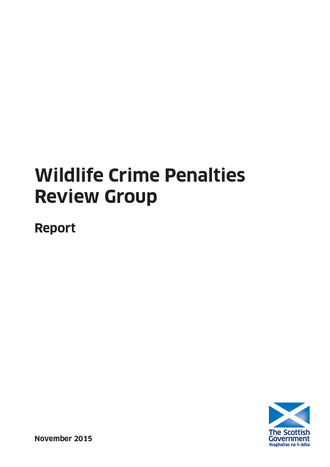 The Review Group was set up in the context of a Ministerial commitment to enhance the enforcement of wildlife crime particularly in relation to the level of penalties imposed. The Group focused its work on the wildlife crime priority areas identified by the Government (bat persecution, badger persecution, illegal trade in endangered species, freshwater pearl mussels, poaching and raptor persecution).

The Group conducted a limited form of public engagement through an electronic questionnaire and follow-up interviews with a representative sample of respondents. We reviewed existing wildlife legislation and the penalties which are available as well as considering the penalties which are actually imposed by the courts. We noted the extensive and fragmented legislation in the field of wildlife crime which encompasses conservation, poaching and welfare crimes and the range of penalties available.

The maximum penalties for many of the principal offences, for example, under the Wildlife and Countryside Act 1981 remain at £5,000 and/or up to 6 months imprisonment on summary conviction ( i.e. by a sheriff alone) with no option of conviction on indictment ( i.e. by a judge sitting with a jury) although there have been piecemeal increases for some species such as badgers and for some newer offences like damaging protected sites and conviction on indictment is available in some cases, again, such as certain badger offences.

Forfeiture penalties are available in relation to most wildlife offences although the wording and scope of the provisions is not identical across the range of offences. Community Payback Orders may also be imposed potentially requiring offenders to undertake up to 6 weeks unpaid work, amongst other requirements which may be imposed in the order. Proceeds of crime legislation can be used to target unlawful gains from offences. Disqualification provisions relating to firearms and keeping animals are available in some cases. We are aware too of links between the commission of wildlife crime and the loss of wider rights or benefits such as removing General Licences or penalising land managers by making reductions to their subsidy payment (through the Basic Payment Scheme).

The penalties imposed by courts in practice tend to be low but it must be remembered that the maximum penalties available will only ever be imposed in the most serious cases and that the courts must take account of the circumstances of the offender including whether he or she is a first offender, is otherwise of good character and his or her income when considering any penalty.

We also considered the use of impact statements whereby the prosecuting authorities lay before the court information regarding the wider impact of the offence on the species or ecosystem affected. These are similar to victim statements provided to the court in traditional criminal trials which the judge may take into account prior to sentencing.

The stakeholder engagement exercise demonstrated that many did not consider that current available penalties and penalties imposed always acted as a deterrent and there was strong support for an increase in the maximum penalties available and the wider use of alternative penalties such as forfeiture. In the case of animal welfare offences involving cruelty some respondents also suggested the use of attendance at empathy training along the lines of anger management training for those involved in domestic violence or speed awareness courses for those involved in speeding offences. Concerns were also expressed regarding the consistency and transparency of wildlife crime sentencing.

We took the view that it was appropriate to compare the available penalties and the penalties imposed in wildlife law with other areas of environmental law such as pollution control, on the basis that wildlife law is a branch of environmental law and that while many pollution offences are committed by corporate bodies, that is also true in wildlife law where badger sett or bat roost destruction, some damage to freshwater pearl mussels and some raptor crime is caused by corporate bodies in the course of commercial activity.

In contrast to the maximum penalties on summary conviction for many of the principal wildlife offences which have remained unchanged for over 30 years in some cases, the maximum penalties for the principal pollution offences have increased 20 fold from £2,000 to £40,000 and terms of imprisonment have been increased from up to 3 months to up to a year. In addition, conviction on indictment is available for all the principal pollution control offences with maximum penalties of an unlimited fine and/or up to 5 years imprisonment being available. The average fines imposed in pollution cases have also increased in a statistically significant way increasing approximately 6 fold between 1996/97 and 2011/12. Even taking into account the impact of inflation alone, the maximum fine on summary conviction of £5,000 available for many of the principal offences in the Wildlife and Countryside Act 1981 ought to have increased to just over £17,100. We also noted that in England and Wales, as a consequence of general reform of sentencing powers, the maximum fine on summary conviction for the principal Wildlife and Countryside Act 1981 offences was increased from £5,000 to a potentially unlimited fine earlier in 2015. It seemed to us that the developments in pollution control provided a system of penalties which could serve as a deterrent to a greater extent than those currently applying in wildlife law.

We also considered if the establishment of a specialist environmental court might result in higher penalties being imposed.

Accordingly the Group concluded that there was a case for increasing the maximum penalties for wildlife offences, for developing a more systematic approach to the use of impact statements, for more consistent forfeiture provisions across wildlife legislation, for clearer links to be articulated between conviction for wildlife offences and the loss of benefits such as firearms and shotgun certificates and that the Crown should continue to use proceeds of crime legislation to the maximum extent possible in appropriate wildlife cases. Moreover, we concluded that there would be merit in developing sentencing guidelines to enhance consistency and transparency of wildlife crime sentencing following the establishment of the Scottish Sentencing Council. Finally, we concluded that the fragmentation and inconsistency in the law could be addressed by legislative consolidation in the medium term. Our recommendations reflect our conclusions.