The tongue and grooved ex 135 x 25mm vertical boards are twice nailed at approx 600 centres, with one secret fixing and one face-fixed. Having consulted with TRADA and followed the recommendations in its Cladding Manual, the architects used a TRADA nail-fixing specification. The contractor offered an alternative 'brad nail' specification (as proposed by their nail gun supplier) which offered equal performance, pull out strengths etc, but nevertheless considerable time was expended by all parties on this issue as there were concerns about the possibility of the boards splitting and on the visibility of the nail heads.

Once commenced, however, the application and fixing proved to be relatively straightforward, although the radiused plan did cause some problems in respect of the groove width 'opening up', and the architects chose to reverse the boards to achieve their visual preferences. The work was carried out on a less-controlled basis than they would have liked and in future they intend to include a requirement within their specifications for early stage samples of workmanship. 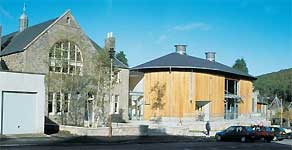