Spend which creates an asset that the authority will use over several years, such as building schools or buying vehicles, is known as Capital Expenditure.

Whilst a local authority cannot borrow to finance day-to-day expenditure, capital expenditure may be funded from borrowing. The costs of repaying the debt, including the interest costs, are met from the revenue account. 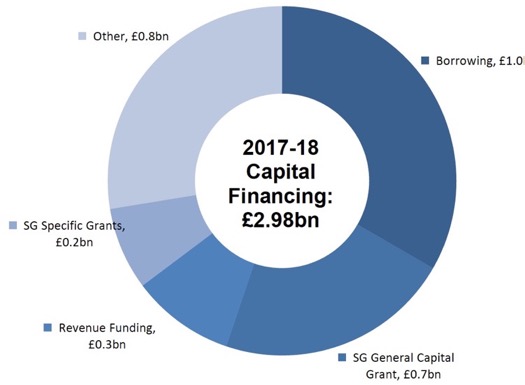 Capital expenditure is financed by one or more of the following:

The majority (76%) of capital expenditure went on new construction, conversions and enhancements to existing buildings.

Between 2016-17 and 2017-18, total capital expenditure to be met from capital resources increased by 0.7% (£0.02 billion). The amount of capital expenditure that is financed by grants from the Scottish Government, including Scottish Government Agencies and Non-Departmental Public Bodies increased by 12% (£0.12 bn) between 2016-17 and 2017-18.

The amount of capital expenditure financed through Borrowing from the Loans Fund has decreased by 16% between 2016-17 and 2017-18.

The profile of the capital grant allocations largely explain the decrease in grant funding and corresponding increase in borrowing, shown in Chart 2.1 below. The 2017-18 grant level is now closer to the level of capital grant that we would expect had the capital grant not been re-profiled. 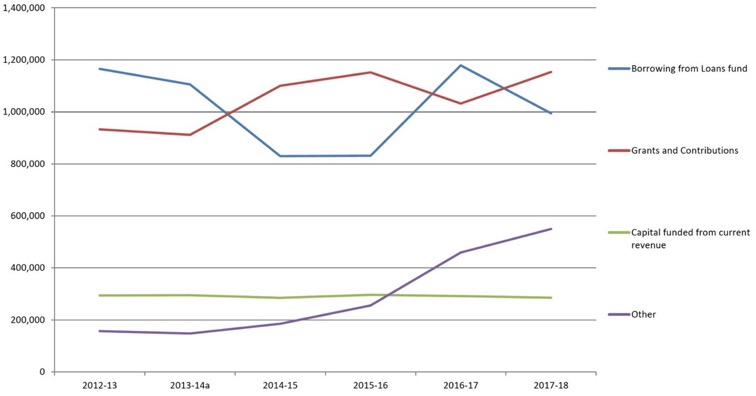 a. Following the Police and Fire Reform (Scotland) Act 2012 figures for 2013-14 onwards may not be comparable with previous years. See Background to Local Government section for details. 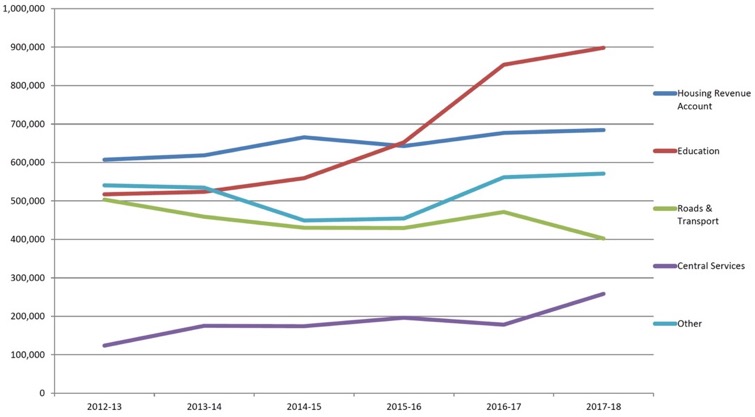 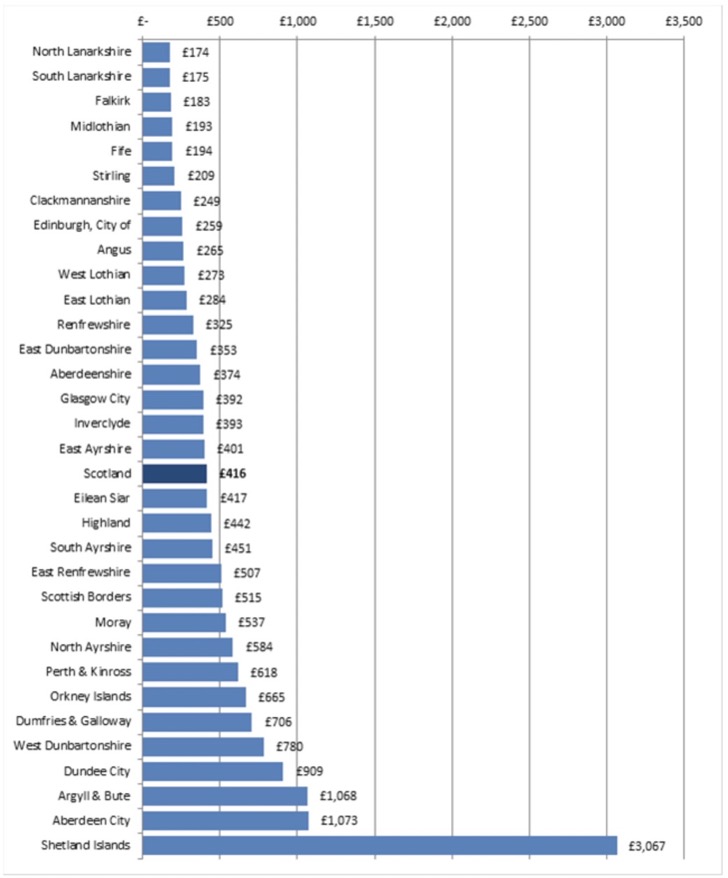 Capital grants are grants provided to local authorities to fund capital investment. The Scottish Government provides two types of grant funding to local authorities – a General Capital Grant and a number of specific or ring-fenced grants. Scottish Government Agencies, such as Transport Scotland, and Non-Departmental Bodies such as sportscotland may also award grants for projects. Other grants and contributions include grants from other local authorities, European Structural Funds, contributions from private developers or persons, and the use of council tax discounts from second homes or long term empty properties. Chart 2.1 (above) provides a time series of grant income from 2012-13 to 2017-18.

‘Capital receipts’ is the term used to recognise income from the sale or disposal of a fixed asset, such as land or council housing. Under statute, capital receipts may only be used to fund capital expenditure or for the repayment of debt.

Table 2.4 details capital receipts categorised by service from 2013-14 to 2017-18. In order to reflect the corporate nature of assets and to promote good asset management practices local authorities commonly move assets to "Central Services" (which includes "Other Services" categorisation in this table) when they become identified as surplus for disposal. This can be seen from the table where in recent years for General Fund services, the greatest value of capital receipts has generally been reported against "Central Services". A detailed breakdown of Capital Receipts by Service for 2017-18 can be found in Annex J.

Capital receipts can be used to finance capital expenditure and repay debt (principal but not interest). These receipts are generated through the sale or disposal of assets, such as a council house or other local authority land/building. Authorities can hold Capital Receipts for future use. As such, capital receipts received and capital receipts used are not necessarily equal.

Table 2.5 shows that authorities had a total of £230 million of capital receipts available for use during 2017-18, of which £93 million was the balance brought forward at 1st April 2017 and £137 million were raised during the year from the sale/disposal of fixed assets.

The main use of capital receipts in 2017-18 was to finance capital expenditure (£122 million), with a further £4 million used to repay debt. Around £2 million was used to pay for equal pay or severance costs. This resulted in a Capital receipts balance of £102 million at the 31st March 2018.

Local authorities may borrow for the purposes of:

Local authorities are required by legislation to maintain a Loans Fund. All money borrowed by local authorities must be paid into this Loans Fund, which then makes advances to service accounts to fund capital expenditure. The Scottish Government monitors the value of debt recorded in the Loans Fund (rather than the level of external debt) because it is this amount of debt that is charged to services over a period of time. The value of external debt is monitored as part of the prudential indicators of the local authority. See section 3.4 for more details.