How does local government spend its money?

Revenue expenditure consists of the day-to-day costs of running local authority services, such as paying salaries and bills.

This expenditure can be funded either by General Funding such as Council Tax or the General Revenue Grant, or Income to Services such as rent or specific grants.

Education and Social Work are the largest local government services, together accounting for more than half of gross revenue expenditure. 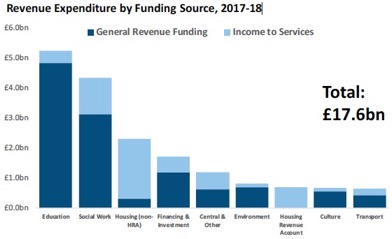 Where does the money come from?

The main source of revenue income for local government is the General Revenue Grant from the Scottish Government, worth £6.8bn.

Local Taxation (Council Tax and Non-Domestic Rates) contributed a further £4.9bn to the funding of local government in 2017-18 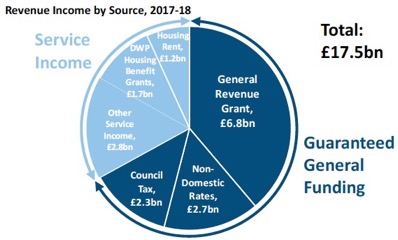 Where is the money spent?

The island authorities spend the greatest amount per head, with Shetland spending £3,936 per person in 2017/18 – more than double the Scottish average of £1,869. These authorities receive extra funding in recognition of the additional costs they face in providing services. 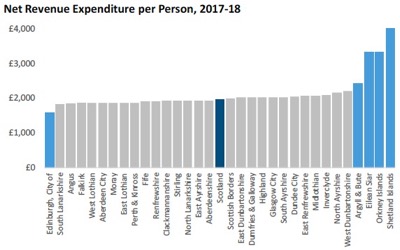 What savings do councils have?

If there is a difference between what councils spend and what they receive, the difference must be met from or contribute to reserves. In 2017-18, councils held reserves equal to an average of 9% of total annual expenditure, with values ranging between 3% and 15% for individual councils.

Orkney and Shetland have been excluded from this analysis, as both have large reserves relating to oil, gas and harbour related activities. 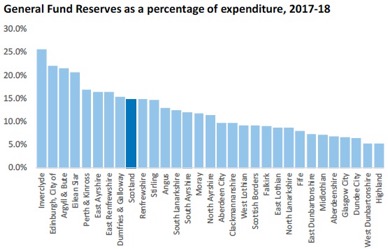 Is Local Government investing in infrastructure?

Spending which creates an asset to be used over several years (e.g. buildings or machinery) is known as capital expenditure. 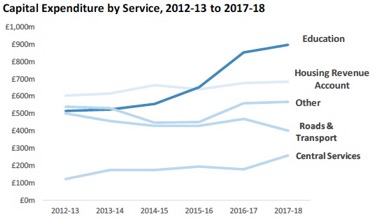 How is capital expenditure funded?

"Other" capital expenditure financing has grown in recent years, largely due to an increase in infrastructure projects funded through the Non-Profit Distributing model. 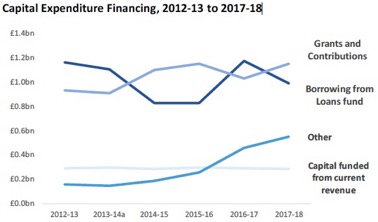 Do councils have a lot of debt?

Of this, £14.0bn was in the General Fund and £3.6 billion was in the Housing Revenue Account – a separate account relating to local authority provision of housing. 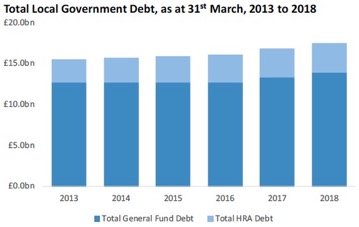 What about debt for individual councils?

Local authority debt is repaid from future revenue budgets. Councils in Scotland spent an average of 10% of their General Funding on debt repayments in 2017-18, with values for individual authorities ranging between 6% and 15%.

Orkney and Shetland have been excluded from this analysis, as they have large levels of investment income. 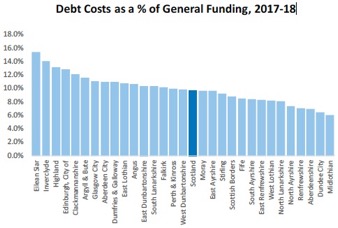 Where can I find out more?