1 Common ragwort (senecio jacobaea) is an erect plant usually 30-90cm high, but may exceed 100cm. The stems are tough and often tinged red near the base, but brighter green and branched above the middle. A basal rosette of leaves usually dies before flowering but the stem leaves persist. They are deeply dissected, with irregular, jagged-edged lobes. All the leaves are dark green and rather tough and may be sparsely hairy on the lower side. The inflorescence is a conspicuous, large, flat-topped head of densely packed yellow flowers with ray florets and disc florets, all of which are bright yellow. The seeds are borne singly and have a downy appendage making them readily dispersible. Once in the soil seeds can lie dormant for several years before germinating.

2 Common ragwort is normally biennial (rosette 1st year and flowering 2nd year). During its first year of growth it establishes a rosette of basal leaves and over winters in this way. During the second year the rosette sends up one or more leafy stem, up to one metre in height, which is unbranched and produces numerous flower heads at the top. The flower heads are carried in a large flat-topped cluster. Flowering usually occurs from June until late October after which the plant dies.

3 Common ragwort can also behave as perennial (flowering every year) after damage to the crown such as cutting, grazing, hoof damage, damage by machinery and following incomplete/ineffective hand pulling in dry weather. It can also remain in the rosette stage for several years under intensive cutting regimes such as may be practised on amenity grassland.

5 Common ragwort can be found over a large range of soil types and climatic conditions, it can be characteristic of badly managed grasslands, where trampling breaks the sward, where patches of turf have died in drought or where there is over or under grazing. However, well-managed acid/calcareous grasslands may naturally contain ragwort. Disturbance to grass verges, embankments and woodland areas which leads to open soil are also favourable conditions for seedling establishment.

Other species of ragwort

6 Whilst only the more frequently found common ragwort is subject to the provisions of the Weeds Act, there are other members of the same native species family which can cause some identification problems. Marsh ragwort (senecio aquaticus) is locally abundant in wet areas of fields, ditch banks and marshes. hoary ragwort (senecio erucifolius) occurs mainly on roadsides, semi-natural meadows and field boundaries. Oxford ragwort (senecio squalidus) grows widely on roadsides, railway land, old walls and unmanaged land. 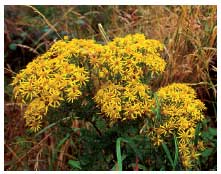