The mean comparative rating across the non-domestic building stock is 100. This figure does not indicate a particular emissions intensity, but adopts the benchmarking approach described above. Introduction of such a metric, a Comparative Asset Rating (CAR), could serve as a strong indicator of improvements in the fabric and heating and cooling systems of the non-domestic stock. 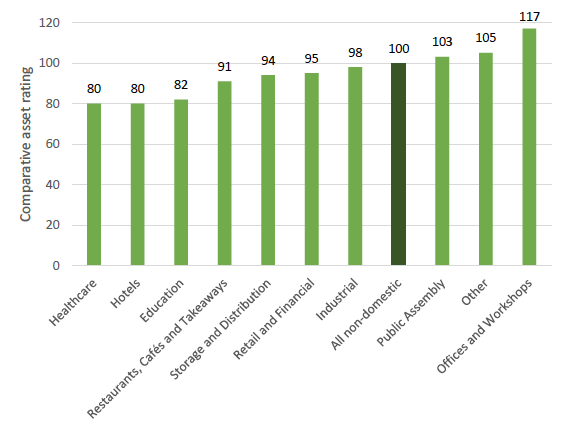 The Scottish current EPC rating and comparative rating report very different results when comparing categories. Table 1 shows that although offices and workshops generally have much lower calculated emissions than both hotels and restaurants, cafés and takeaways, they tend to perform much worse relative to their reference building. This highlights the potential issues with using the current EPC rating as an indicator of how a building performs compared to other buildings of a different building type.

It is clear that the current reference building approach for any given building type, with a comparative rating of 50[4], represents a challenging standard for most non-domestic buildings to match. However, for such a comparative approach to have specific meaning for Scotland beyond comparison with England, Wales and Northern Ireland[5], how the reference building represents an exemplar must be clearly defined.

The Energy Efficient Scotland Route Map proposed research into the setting of future improvement targets for non-domestic buildings, with the development of a notional building specification that illustrates 'what good looks like'. Accordingly, a Scotland-specific indicator of this type is likely to be considered as part of change proposed from 2021.