With limited exceptions[7], all buildings that are constructed, sold, or rented to a new tenant require an EPC.There is also a requirement to display EPCs in larger buildings visited by the public. An EPC, required under Scottish regulations which implement Directive 2010/31/EU on the Energy Performance of Buildings, provides information on the energy and emissions performance of a building, calculated using an agreed UK methodology. EPCs enable people to compare the performance of buildings and also illustrate the potential for better performance through building improvement work.[8]

An EPC is not designed to account for energy use beyond heating, cooling, hot water ventilation, lighting and auxiliary systems such as pumps and circulators. The EPC model uses information on building type, fabric, lighting and HVAC systems submitted by an EPC assessor to calculate ratings. 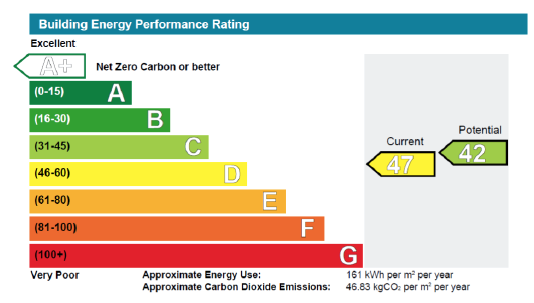 The current rating shown in both the yellow arrow and the text at the bottom of Figure 9 is a modelled estimate of annual carbon emissions per square metre for a particular non-domestic building.[9]

For domestic EPCs, all ratings are indexed, ranging from 0 to 100 with higher numbers indicating better performance. In contrast, a lower numerical rating is preferable for non-domestic EPCs. Buildings generating more energy from renewable sources than they consume are able to achieve a negative rating and there is no maximum rating for inefficient buildings. These differences mean domestic and non-domestic current ratings are not directly comparable. The process used to calculate the current rating applies a standard usage pattern to every building of a particular type.

Within the EPC Recommendations Report, a comparative rating is also reported. This is an alternative metric, used elsewhere in the UK, which compares the energy efficiency of a building to that of a reference building of the same type. It is therefore expressed as a unitless factor. A rating of 50 indicates parity with the reference building while a lower number indicates lower emissions.

All EPC ratings are independent of actual usage of the building as standard assumptions are always applied for each building of a particular type.

The analysis in Scotland's non-domestic energy efficiency baseline is based on 29,956 non-domestic EPCs issued between 29 January 2013 and 31 July 2017. Where multiple EPCs were issued for a particular premises during this period, only the most recent was used.

Five outlying EPCs were rejected on the grounds that they contained palpably implausible energy efficiency data.

Due to missing data, the sample size was reduced from 29,951 to 20,232 for comparative rating calculations. Where current EPC ratings are compared to comparative ratings there is at most 0.6 per cent difference between the mean current rating from the full sample and that from the reduced sample.

How has the non-domestic energy efficiency baseline been calculated?

Non-domestic rates (NDR) data from the Scottish Assessors Association Portal was used to help ascertain the overall number of buildings of each type.

Large data files were stitched together to form a unified data set containing all available address, building type and internal area information. Address information within both the EPC data set and the combined NDR data set was used to seed all entries with UPRNs. Some entries in each data set then had both an original UPRN and a seeded one. Often these differed. UPRNs were often designated to multiple properties in either data set despite their supposed uniqueness.

An algorithm was developed to determine whether to accept matches between UPRNs in the EPC data and UPRNs in the NDR data. For UPRNs appearing for only one property in each data set, it accepted all matches where the UPRN appeared at all four opportunities (original and seeded in both data sets) and some matches where a UPRN appeared three out of four possible times. A UPRN appearing for more than one property in either data set usually resulted in rejection of matches based on that UPRN.

Step 4: Weighting mean ratings and banding distributions Mean ratings across the whole non-domestic stock were calculated using the mean rating for each building type from the whole EPC data set (excluding outliers as noted above) and the projected total number of buildings of each EPC type found in step 3.