Why do we need to calibrate loggers?

How does SRTMN correct for logger bias?

A 2-stage logger calibration procedure has been established under SRTMN to correct observed temperatures to “true” river temperatures. This procedure is shown as a schematic in Figure 1. 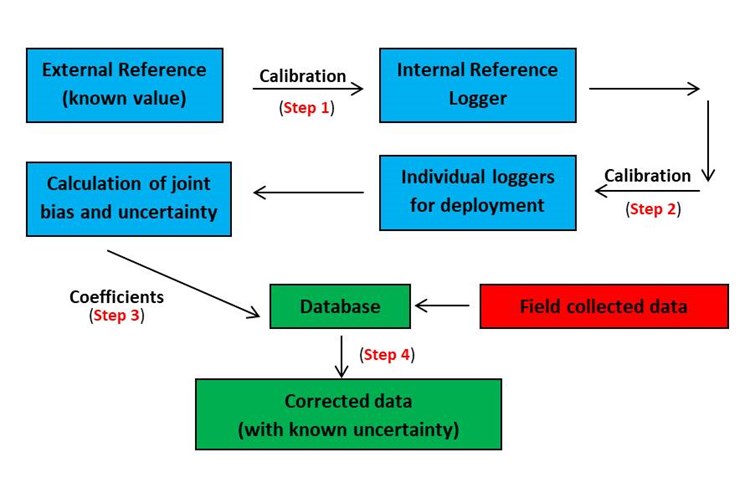 Schematic diagram showing the steps involved in the 2-stage logger calibration procedure established under SRTMN to correct observed temperatures to “true” river temperatures. All SRTMN are calibrated against an internal reference logger, which in turn is calibrated against external reference standards. The joint uncertainty is calculated and calibration coefficients , including coefficients that characterise the uncertainty are recorded on the Marine Scotland FLEObs database. Observed values are corrected on export from the database. 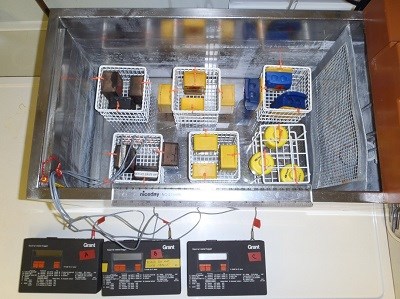 Step 3: Joint bias and uncertainty between external / internal (step 1) and internal / individual logger (step 2) is calculated using an in-house R script and correction coefficients are obtained that relate the recorded temperature to the “true temperature”. These coefficients are then uploaded into the Freshwater Laboratory Environmental Observations (FLEObs) database.

Step 4: Calibrated loggers are then deployed in the field. These loggers are routinely downloaded, and raw data is uploaded into FLEObs. Finally, corrected data (adjusted using the appropriate calibration coefficients) is exported out from FLEObs (Figure 3).

Step 5: Loggers are rotated on a multi-year programme. When loggers are returned to the lab, they are re-calibrated and new-coefficients uploaded to FLEObs. When data are exported from FLEObs, they are corrected using the calibration equation appropriate to the dates of data collection.