River temperature is a critical control on the health of freshwater ecosytems, controlling species distribution and abundance. In Scotland many native freshwater species, including iconic fish species such as brown trout and Atlantic salmon, are adapted to live in cool water habitats. Juvenile Atlantic salmon perform best when temperatures are in the mid-teens, and struggle where temperatures extend much beyond 20°C.  At 23°C juvenile salmon experience thermal stress and behavioural change, that includes abandoning territories and searching for cool water refuges. Where temperatures reach 32°C juvenile salmon will die in the space of minutes. During the summer of 2018, it is estimated that around 70% of Scotland’s rivers experienced temperatures that exceeded this threshold for thermal stress. UK climate change projections provided by the MET Office (UKCP18) indicate that summers like 2018 could occur every other year by 2050, with increasingly high air temperatures and low summer flows.

Maximum summer river temperatures are primarily driven by solar radiation, moderated by characteristics of the rivers, the surrounding catchments, the volume of water in the rivers and their residence times. Water volumes and residence times can be increased by reducing water demand and abstraction. The amount of solar radiation reaching the river can be reduced through management of riparian (bankside) vegetation.

Riparian trees can shade river channels, reducing the amount of solar radiation reaching the water surface. By increasing the amount of trees on river banks it is possible to reduce river temperatures and mitigate some of the effects of climate change. Increased shading can also help to mitigate other pressures which are expected to be exacerbated by climate change, including the impacts of eutrophication and algal blooms. There is considerable potential to increase riparian woodland on Scotland’s rivers as it is one of the Europe’s most sparsely wooded countries. Scotland has ca. 108,000 km of rivers, of which only ca. 35% are protected by any substantial tree cover. Given the time taken to plan and implement appropriate planting, and for trees to grow to a height where they provide meaningful shading, it is important that efforts are made increase the spatial extent of riparian woodland as a matter of urgency. However, it is also important to prioritise efforts to river reaches where they can deliver the greatest benefits in terms of climate change adaptation. This is one of the main objectives of the Scotland River Temperature Monitoring Network.

The Scotland River Temperature Monitoring Network (SRTMN) was established in 2013 as a collaboration between Marine Scotland, Fisheries Trusts, District Salmon Fishery Boards and the University of Birmingham. It began as a strategically designed, quality controlled network of > 220 core river temperature monitoring sites. In recent years the network has expanded to include additional local data collection initiatives, short-term deployments (ca. 1 year) in unmonitored catchments and monitoring of catchments influenced by natural and modified standing waters that were not represented in the original survey design. Data from the network are stored in a central database managed by Marine Scotland Science and reported annually (see outputs and tools).

Over time data from the network will be valuable for assessing temporal trends in river temperature and the effects of management action, particularly tree planting. In the shorter term, data from the network have been used to develop novel spatio-temporal statistical river temperature models that can predict river temperatures across Scotland under current and future climate. These models can be used to map where river temperatures are hottest, and where river temperatures will be most sensitive to climate change (will change most). In parallel a complimentary deterministic model, based on physical energy exchange processes, has been developed to map the potential of riparian tree planting to reduce summer river temperatures. The outputs of these two models have been combined to provide a single Riparian Woodland Prioritisation Score for Scotland to inform management at national and local levels, supported by online mapping resources (see outputs and tools)puts and tools(om 1-20ned to provide a single  and the effects of managment ed standing waters. and the resdience 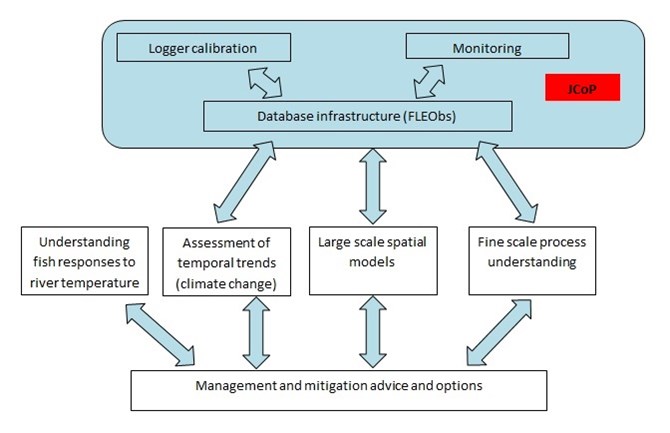 Schematic diagram showing how different components of river temperature research are underpinned by temperature data and infrastructure from the Scotland River Temperature Monitoring Network, and in turn support advice on river management and mitigation.