Whilst Scotland has achieved some notable successes in its approach to boosting exports, such as the collaborative approach in the food & drink sector, it is important that we remain alert to global best practice. To help understand better how Scotland can close its export performance gap we have considered the experience of other comparable medium sized economies and looked at the ways in which they frame and monitor their export targets and provide support to businesses to boost export performance. Where appropriate to the Scottish context, these learnings have been incorporated in this plan.

The Ireland Connected Strategy of March 2017 sets a goal for increasing indigenous Irish exports by 26% by 2020 and, crucially in a post Brexit context, seeking to increase the percentage of indigenous exports going to markets outside of the UK to 80%. This is seen as being particularly important for the resilience of the economy in Ireland which has traditionally relied on the export performance of its base of inward investors and predominantly on exports to the UK market.

The strategy sets out strategic direction to 2025, with a range of targets across export, investment and wider business support measures;

Ireland also takes a “whole of government” approach to working with businesses and this is something we would be keen to see replicated in Scotland through the efforts of the Strategic Board. Consistent with our approach, Ireland also identifies several areas of competitive advantage on which to focus its efforts (ICT, life sciences, agrifood, internationally traded services, engineering/industrial products). It also has a strong reputation for meaningful evaluation of the effectiveness of its initiatives.

Ireland’s export growth over past decades has been significant. The Irish performance has also been characterised by a significant diversification away from its traditional UK markets over time. While exports from Ireland to the UK have increased at an annualised rate of 3.0% since 2003, they have fallen as a % of Ireland’s total exports from 33% to 21% due to even faster growth in other markets. Longer term trends on goods (data is not available on services), show that Ireland exported over 60% of its goods to the UK at the start of the 1970s and this has reduced to 11% in 2018.

Ireland's goods exports to the UK have increased over time, but have declined as a proportion of Ireland's international exports 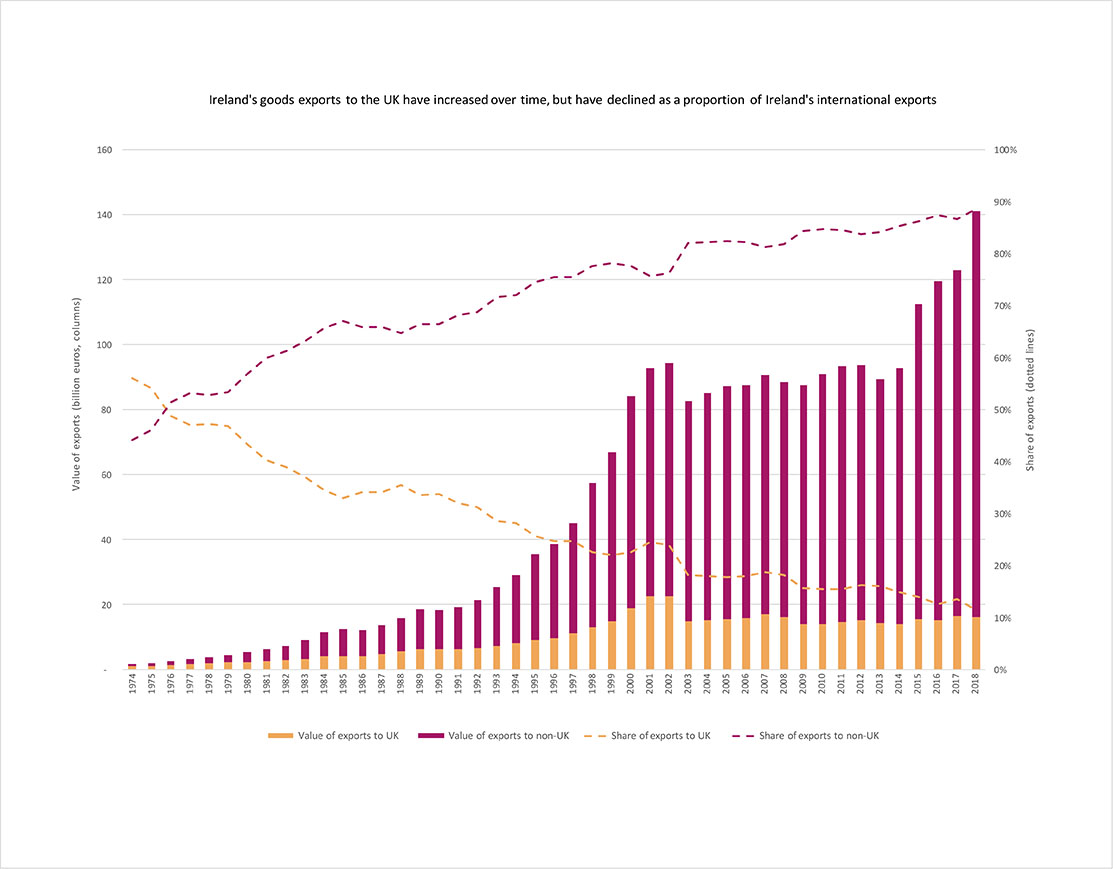 We will continue to learn from colleagues in Ireland in developing our own approach, including in relation to its evaluation framework for assessing the effectiveness of interventions and the way in which it mobilises its diaspora as advocates for all it has to offer.

The experience of Ireland suggests that indicators that we would also seek to monitor through this plan will include:

Denmark has a high proportion of exports to GDP given its proximity to major European markets, in particular Germany. Exports to Europe account for 70% of Denmark’s exports. Other priorities are the high volume US and Asian markets. The Danish enterprise support environment is particularly decentralised and fragmented. In 2014 there were efforts to simplify this landscape through the strategy on Export Promotion and Economic Diplomacy.

This sets out 9 key measures, underpinned by 40 initiatives to deliver improvements in export performance.

1. Streamlining and coordination of export promotion programmes and easier navigation for businesses.

4. Optimisation of Trade Council efforts in cooperation with the Danish business community.

9. A better framework for effective and business-oriented export promotion campaigns.

There are a number of measures here that are broadly similar to those being outlined in this plan or already underway through the recommendations of the Strategic Board.

Having had to significantly refocus the balance of its exports in the 1970s following the UK’s decision to join the EU and having a small domestic market, exports are a critical part of New Zealand’s economic growth strategy.

In a bid to improve performance, New Zealand Trade and Enterprise (NTZE) has decided to focus the balance of its efforts on high growth potential firms. This is part of a concerted effort to shift the focus in export terms from volume to value.

This initiative, Focus 700, includes a structured process to identify high growth firms that are committed to work intensively with NZTE. Resources are allocated disproportionately to these high growth potential firms.

Recent figures indicate that those 700 businesses grew their international revenue by about $3.5 billion, rising by 9.2% more than the benchmark group of exporters(6).

NZTE works with the Focus 700 firms in an intensive manner, and in a way tailored to the firms’ needs. Support can include management capability building, strategic advice, market intelligence and advice, in-market support, as well as targeted financial support. This assistance is provided by NZTE staff (many of whom have prior business experience), by NZTE advisory boards and with third party providers.

Firms are assessed regularly to ensure that they are tracking towards their specified key performance indicators and that they are working with NZTE in the manner agreed. There is the ability to drop firms from this programme if they do not meet the requirements of the programme.

Scotland’s plan for export growth will seek to learn from this approach through a strategic focus on those businesses most likely to drive a shift in export value.