The programme to recruit a base for selection for the face to face interviews halted on the third day. The researcher had conducted 87 calls. The calls resulted in not a single recruited pub for the research programme.

This situation required review with members of the Scottish Government team at length and the recruitment research placed on hold. It was agreed that the Sounding Board should be contacted and an understanding of the present situation taken.

A revised contact and awareness strategy was developed and CGA created a dedicated Sounding Board member email facility through which individual pub businesses could confidentially express their interest of participation in the Face to Face study.

Respondents needed to supply their name, their pub name and address along with other contact details such as outlet phone number, mobile number and an email correspondence address.

Revision of the research process

The initial start on recruitment highlighted a problem of willingness amongst pubs to participate. The above actions altered the initial process as outlined in Figure 1.

The recruitment process became as shown in Figure 2 overleaf. 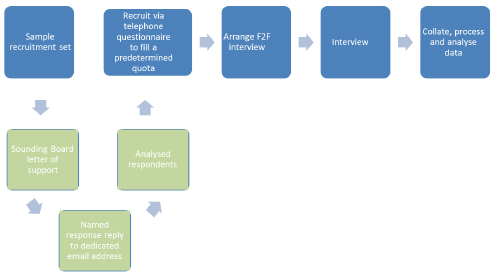 The call programme to recruit direct by CGA recommenced in mid to late February 2016.

After several weeks, the number of recruited and voluntary interested pub businesses compiled had created a set of 40 potential interviewees. The dataset vetted for appropriateness so it could fulfil the target number of 25 interviews.

Identified that Tenanted Free of Tie were not represented

The subsequent call and the completion of the final selection questionnaire revealed a problem for the identified cohorts. There proved to be sufficient "Fully Tied" and "Independent Free" to fulfil the relevant quotas. While, there were some "Partial Tied" businesses recruited, there were no "Tenanted - Free of Tie" identified who were prepared to be involved in the case study process.

Further investigation with Sounding Board members corroborated the limited number of tenanted Free of Tie agreements amongst pubs in Scotland. With this additional knowledge, CGA suggested to Scottish Government that this cohort transferred to Partially Tied. A target of 5 interviews was set amongst tenanted pubs with partial ties.

The representation of the different pub types changed as follows:

Final recruitment and selection of pubs and interview process

CGA produced three structured bespoke questionnaires in the months of February and March 2016. The questionnaires designed to be relevant to each pub type but at the same time maximising comparability across them and professionally printed in an A4 booklet amounting to 28 pages in total. The questionnaires included the content, structure and flow guidance notes published on the facing page to the specific research questions. A separate guidance document allowed for the collection SCORFA information.

The Field Researchers planned and arranged the appointments directly with the individual interviewees. The research process took 11 weeks to complete 24 of the 25 selected interviews. One of the selected interviewees proved to be problematic. After extensive contact attempts an alternative outlet replaced it in the sample.

Recruitment of the replacement occurred in early July 2016, and a full interview conducted on 19 th July 2016.

The interview questionnaire data entered by the Field Researcher was made available to the CGA project research team in a database format for the purpose of analysis. However, before this was conducted the data entry was verified by comparing the information on the original questionnaire to that in the reporting database. A number of discrepancies were identified. These related solely to free format comment areas at the end of the questionnaire [38] .

The additionally gathered research material was specifically grouped into a dedicated interview pack. All material dispatched by the researchers was received and cross-checked and corroborated by staff in CGA's Stockport office on receipt to ensure CGA accounted for all research materials gathered.

To ensure that the full spectrum of operational types was represented in the research exercise, Pub Companies and Managed Pubs were also included.

The Sounding Board was instrumental in providing CGA with access to key people within the core businesses identified by CGA as having a significant presence in Scotland within their particular operational types.

At this point - in conjunction with CGA - both the BBPA, and representatives of key managed pub operations within the Sounding Board, were tasked with identifying those businesses required which would form the basis of the research.

A total of 8 pub companies and 9 managed businesses were identified as being best representative of their sectors of the market in Scotland. Chosen on the basis of set criteria including: total number of pubs in Scotland within all business types, overall size of business (financial and geographical), perceived influence within the sector, profit and turnover.

The differing requirements of the information needed from the Pub Companies and Managed Businesses - based on operational practices and project perspective - identified a requirement to produce two separate individualised survey questionnaires. These were designed to take into account the primary function of these operational types and to maximise comparability with the tenanted sample.

Managed pubs were given a template (for self-completion), whereas Pub Companies were initially interviewed over the phone, and then self-completion template surveys were used to provide detailed financial information and supplemental comments.

Communications between CGA and key contacts was instigated at the beginning of May 2016.

A formal request was made for cooperation, along with provision of details outlining the required information - based on the needs of the reporting.

The next phase of the process was to arrange interviews (whether in person or by phone) from which a view on the individual businesses position could be reached and to ensure clarity regarding the completion of the surveys.

Some respondents required additional reassurance in terms of confidentially non-disclosure agreements ( NDA). This was primarily in relation to the release of sensitive financial information.

After several months of following this process - there remained a number of businesses which CGA had either not been able to persuade, or gain a willingness, to engage.

The process of obtaining the necessary data proved to be time consuming, with research needing to be conducted over a 12-week period - and some final returns not received until early August 2016. Throughout this time, CGA was in regular contact with key people within each business to ensure that data provision and return was as speedy as possible.

Once the completed research data was received - both in the form of completed CGA surveys, detailed financial, pricing and operational information - the base responses were reviewed, collated and processed into a bespoke internal database.

The complexity and breadth of data created further delays - as a significant process of individual product coding was necessary to integrate pricing models into the broader comparative datasets. Any additional information or appendices sent subsequently were validated and processed for integration into the wider database, or held to provide additional context to the data analysis.