The Highland Housing Fair has been developed to showcase the best of public realm design, housebuilding, design and technology. The masterplan's layout responds well to the local landscape, whose 18th-century designed parkland surrounds and includes the site.

The Highland Housing Fair is intended to showcase the best of public realm design, house building, design and technology, raising standards of urban and rural development. The masterplan was the basis for a housing design competition held in the spring of 2007. The winner for each plot has been offered the chance to build their design at the Housing Fair site. To encourage innovation, land prices were set at a level somewhere below full market value.

The idea of the housing fair comes from Finland, where such events attract several hundred thousand visitors, locals, tourists and designers and builders. Due to present uncertainties in the housing market, the Highland event will be held in 2010, a year later than originally planned. It is hoped to attract 30,000 visitors and, thereafter, the homes will be sold off or made available for rent. The Fair's site covers five hectares at Balvonie Braes, just south of Inverness, by the A9 trunk road (good access being essential to accommodate the large numbers of visitors expected).

The Fair will be in three parts:

The hope is that Highland Housing Fairs will be held every two years, in a variety of Highland settings (such as urban, suburban, rural and crofting).

The competitors' brief was to achieve the following objectives:

The Fair is an initiative of the Highland Housing Alliance, set up in 2005 as a not-for-profit organisation to find ways to build more affordable houses for people who want to buy or rent. The fair is supported by a consortium of agencies, including Highland Council, the Scottish Government, Highlands and Islands Enterprise, the Forestry Commission, Inverness City Partnership, Sust. (Sustainability in Architecture programme), the Royal Incorporation of Architects in Scotland and the Inverness Architectural Association. The housing development is being managed by the Highland Housing Alliance and the Fair event by Highland Opportunity.

The mix of housing is intended to reflect the type and tenure of homes that would typically be found in a mature Highland community. It will demonstrate a range of housing for different markets: detached houses, semi-detached and terraced houses, flats for first-time buyers, and houses with home-working options. Self-builders will be able to build their own homes, and there will be new types of modular homes.

The masterplan's layout responds to the local landscape, whose 18th century designed parkland surrounds and includes the site. Principal streets go up and down the contours, while secondary streets, mews streets and lanes run along the contours, providing the easier walking routes.

The strategy for movement within the development is based on the principle of shared space. Priority is given to people on foot and bicycles. The masterplan seeks to create an informal layout of a type that seems appropriate to the Highlands, rather than the formality that tends to be imposed on housing developments largely by the highway regulations (or, rather, by the way in which those regulations are often interpreted).

The shared spaces that the masterplan specifies reflect the new trend towards creating ambiguous spaces whose users must informally negotiate to decide who has right of way. The inspiration for this has come from progressive highway engineers such as the late Hans Monderman in the Netherlands. But such shared use of highway space would be the norm in a traditional Highland settlement, and in urban mews, where people, horses and wheeled traffic traditionally co-existed. Even so, such unorthodox highway engineering took a good deal of ingenuity to achieve on the Fair site, in what would generally be thought of as a semi-suburban setting. 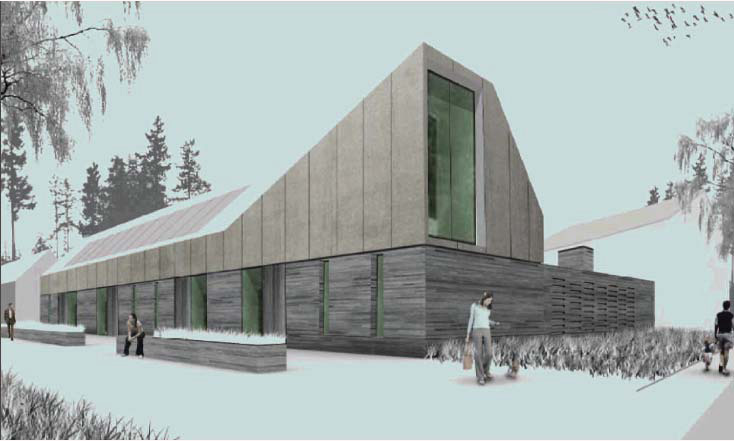 The streets will be generally relatively narrow, limiting the cost. A special surface treatment will be applied at the junctions. A connection to the existing adjoining development to the south-west (a conventional, contemporary housebuilders' layout) will be wide enough for one vehicle to pass, limiting vehicle speeds between the two developments.

The masterplan aims to locate car parking, recycling facilities and open space in ways that will require residents to walk in the street and to enter their homes from the front. The aim is to integrate these facilities fully into the public realm, making them attractive and accessible. Kitchens and home/work offices will overlook the street, and the layout is designed to encourage the use of front gardens. Much of the car parking is shared and on-street, though in-curtilage parking is required within some plots.

The plots have been sized to allow shallow plan (six metre) buildings with the potential for dual aspect cross-ventilation and good daylighting. The main aim of the shallow plan is to provide for long principal elevations to the street and to avoid the need for deep-plan buildings with large roofs. The heights specified in the masterplan match the scale and proportion of the indigenous rural dwellings and steadings of the Highland countryside. The height must be achieved for 75 per cent of the frontage line shown in the masterplan. A near-continuous frontage line will create an enclosed street, providing coherence to the development. Some of the plots will have frontage elevations to more than one street.

The masterplan encourages simple forms, without elaborate dormers, porches, bay windows, false chimneys, non-integral conservatories, crow-stepped gables, turrets, ornamental barge boards or the like. It does not specify a particular architectural style, hoping instead that the experimentation within a Highland context, the focus on sustainable solutions and the specified urban form will create rich diversity and satisfying coherence. This does seem likely to be achieved.

The masterplan gives each of the four zones a particular materials theme, loosely identifying a common character and a limited palette of materials for each.

The masterplanners' challenge was to create a framework for a mix of housing designs, tenures and sizes. The masterplan was presented in a document called the Urban Design Framework. This set out the Highland Housing Alliance's vision and expectations. It formed the design brief for architect/developer teams participating in the RIAS competition, and included judging criteria for the competition. The framework document includes an element of design coding. It has continued to be used as a point of reference and as a means of design coordination during the post-competition procurement process. The framework's considerable length was necessitated by the extensive range and mix of plot types.

Although Balvonie Braes was designated in the Inverness Local Plan not as housing but as a green wedge it had been recognised that it might be allocated for housing later. The intention is that the most popular and feasible designs will be built in a second phase of a further 40 houses on the Balvonie Braes site.

The real test of the masterplan will come when the site is actually developed; when, for one month, the Fair is open to scrutiny from the public and the development industry; and when later it becomes a place where people live and (in some cases) work. It will be a showpiece for urban design, presenting a form of layout very different to Scottish housebuilders' standard models. There are very few imaginative, alternative models of new residential development to be seen in Scotland, or indeed in the UK, so this will fill a real gap.

The degree of thought that has gone into the masterplan has been high. It is hard to predict how successful the eventual development will be when it settles down after the Fair. Much will depend on the detailed design and construction of the houses; what compromises are made in the late stages; and how the eventual residents respond to the opportunities that the place offers.

The performance of the individual buildings is also hard to predict. As with any one-off design, and with any experiment, some things inevitably will not turn out as expected. But experimentation in urban design and housing design is too rare, and lessons learned here will be of value even if in some cases they are a by-product of a building design that did not quite work as intended.

As an experiment in sustainable development, Balvonie Braes will be limited by the fact that it is a greenfield site in the countryside, unserved by public transport. In other ways, though, its attempts to make efficient use of resources should constitute valuable experience.

The competition was successful in attracting entries from architect and developer teams who rose to the challenge of thinking about new ways of designing in response to the competition's challenging brief. It is hard to over-estimate the value of this attempt to inject new thinking into Scottish housebuilding practice. The Fair has certainly been fortunate in having attracted the involvement of some of Scotland's best and most ingenious architects.

The expectations of developers, the building industry, architects and the public will not be changed by a single, relatively small initiative, but the Highland Housing Fair looks set to make a significant contribution. 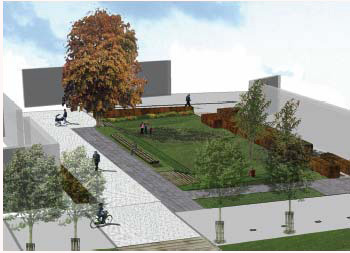 Project type
Masterplan for a housing fair, based on the Finnish model, with a housing design competition. After the Fair is complete, the exhibition space will be redeveloped as affordable housing and community facilities to create a modern village for around 300 people.

Location
The setting is suburban/semi-rural. The location was chosen as being a challenging area for a masterplanner, and one typical of many places where houses are built to low standards of design.