Crown Street today is a testament to the robustness of the CZWG masterplan. This envisaged a network of connected tree-lined streets reinstating the traditional grid, faced with mainly four-storey, tenement style buildings, with a clear distinction between their public and private faces. All this now exists.

A reinterpretation of Glasgow's tenement tradition. The on-street housing is overlooked by the residents
New Gorbals Housing Association 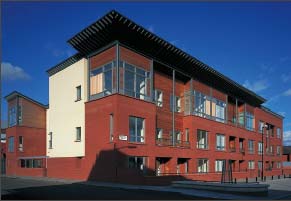 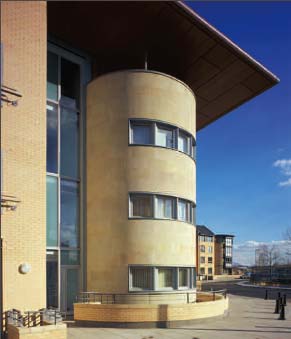 The challenge at Crown Street was simple: to regenerate an area and create a place where people would want to live, and where they could choose between the private life of their own home and the public vitality of the street.

Located to the south of the River Clyde just south of Glasgow city centre, Crown Street occupies what was formerly the site of 12 deck access blocks. This was the Hutchesontown E council housing scheme, which had itself replaced the Gorbals. 'Hutchie E', as the scheme was familiarly known (also, more evocatively, 'The Dampies') was built in 1968. The last residents moved out of their damp-ridden homes in 1982, only 14 years after completion. Five years later the 40-acre site was cleared for redevelopment.

The Crown Street Regeneration Project was set up in 1990 to bring new life and confidence to the area. The partnership included the Glasgow Development Agency, the City of Glasgow District Council, Scottish Homes, New Gorbals Housing Association and, most important, the local community.

The Crown Street area has been redeveloped according to a masterplan by CZWG Architects. The success of this has led to the masterplanning and redevelopment of the adjacent Queen Elizabeth Square and Moffat Gardens areas to the east, and the Laurieston area to the west.

Slum clearance, post-war redevelopment, demolition and regeneration have been features of the past few decades in the Gorbals. Crown Street and its surrounding areas had been the subject of a series of partly implemented masterplans over two centuries. In the early nineteenth century the area was planned as a suburb for the middle classes. But before all the proposed handsome streets had been built, the intended residents moved west from Glasgow's historic centre rather than south. Instead of becoming a fashionable address, the Gorbals became bisected by railways, hemmed in by works, and packed with low quality housing.

Post-war regeneration aimed to tackle the area's problems. Plans were prepared and implemented that swept away everything associated with the old Gorbals, replacing it with a brave new world of high-rise living and towers within parks. The first two areas to be tackled were Hutchesontown and Gorbals (a name that is used for both the wider area as well as for the more specific area around Gorbals Cross). It was the failure of this attempt at regeneration that led again to wholesale demolition in the late 1980s. 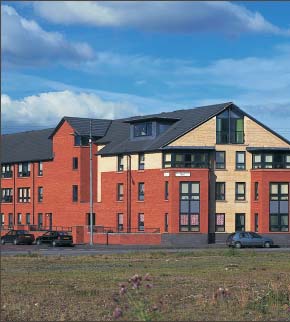 The masterplan's concept of connecting into the existing street structure has also been achieved. Former streets have either been reinstated, extended, or realigned to create links into the surrounding area.

The oval space that was such a distinctive feature of the masterplan provides a formal public space to the south of the scheme, framing the Grade A-listed Alexander 'Greek' Thomson church as an historic landmark. The local centre has been moved from its 1960's location to the north of the scheme. It provides a small supermarket, a library and several smaller shops, including cafes, butchers, newsagents and chemists. Together, the network of streets and spaces, and street-based housing, retail, commercial and leisure uses, have created a lively neighbourhood.

The challenge at Crown Street was simple:
to regenerate an area and create a place where people would want to live, and where they could choose between the private life of their own home and the public vitality of the street.

Representatives of the community council were involved throughout the decision-making process to ensure that proposals reflected local aspirations. 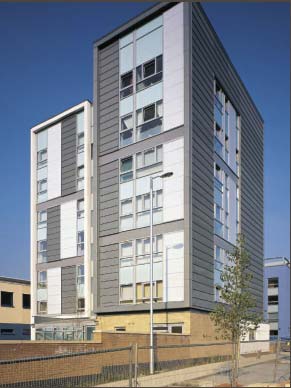 The determination of local people to have 'Hutchie E' replaced was a primary driver for the regeneration of Crown Street. A local campaign ensured that the existing buildings would not be retained for rehabilitation. A new approach to development in the Gorbals was needed. Initially the partnership focused on the primary goal of gaining full control of the land. It then undertook a series of study tours to regeneration projects and held a national design competition to appoint a masterplanner. CZWG was appointed from a shortlist of four design firms.

Representatives of the community council were involved throughout the decision-making process to ensure that proposals reflected local aspirations. This was helped by Glasgow Development Agency purchasing the land and developing partnerships. As soon as the design team was appointed, the partnership and the community began the process of shaping the Crown Street masterplan into a deliverable scheme.

The project's aims were:

To make sure that the masterplan would be delivered, the Crown Street proposals were embedded in the planning process at a number of levels. First, the scheme conformed to the Strathclyde Region Structure Plan. Secondly, the draft local plan for the Gorbals was revised to take account of the Crown Street proposals. Thirdly, the partnership secured an outline planning consent for development. Landownership, permissions, community support and a clear process allowed the partnership to begin on site within a year of being formed.

The interior of the street block at Errol Street
The space is inaccessible to non-residents, creating a clear distinction between the public and semi-private realms
New Gorbals Housing Association 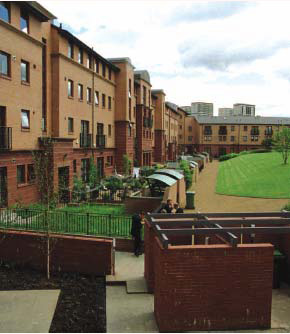 The strengths of the Crown Street masterplan are illustrated by how closely the actual development conforms to it. The scheme has succeeded in its aim of creating a place where people want to be. The area has a thriving local centre and few, if any, of the residential units are unoccupied. The main streets are lively and the public spaces are well maintained. The form of development, based on Glasgow's tenement tradition, has provided a clear distinction between public space, defined by the front facades, and the semi-private space in the courtyards. This makes responsibilities for management clear. The comprehensive public art strategy has made a significant contribution to the success of the project. The park is under-used though, mainly because there is a great deal of alternative space available to residents in the centre of their blocks.

The commitment of both local residents and developers to the masterplanning process is reflected in their support for continuing the area's regeneration, in Queen Elizabeth Square and Moffat Gardens to the east and Laurieston to the west. The masterplan for Crown Street was only the first stage in the process.

It is clear that the robustness of the masterplanning process at Crown Street has been grounded in the way in which the masterplan has been fixed in the planning system. It would not have been enough just to establish it through outline planning consents: the link to planning policy at both regional and district level has been essential.

The ability to implement the masterplan was helped by the way in which the new streets divided the 40-acre site into a series of distinct development blocks. 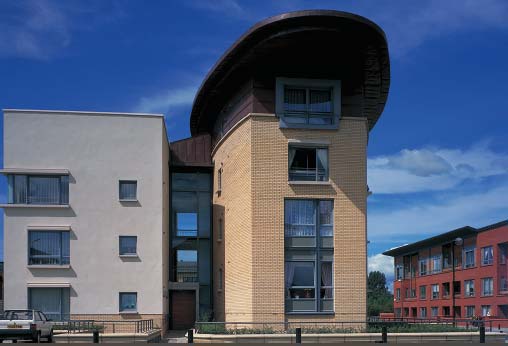 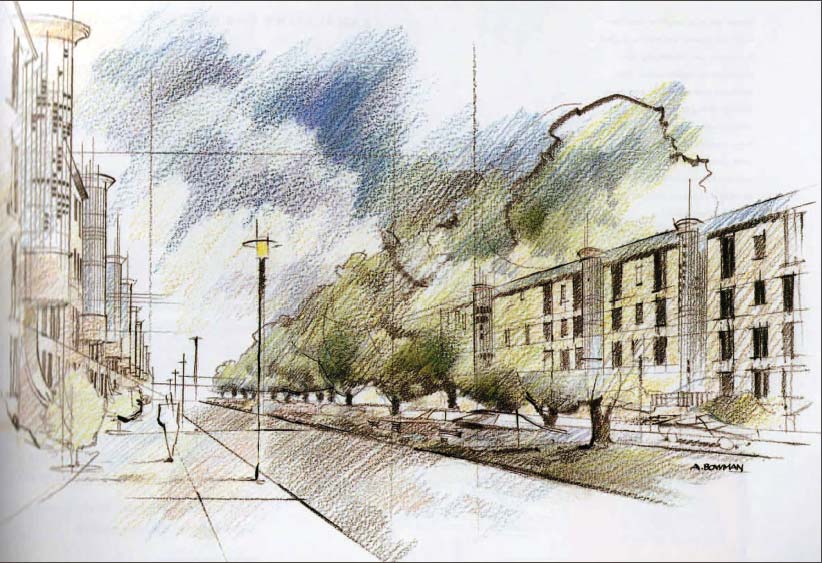 Sites could be procured and developed independently, while maintaining a clear relationship with the development as a whole. However, the tender process relating to this has been criticised as having been unnecessarily onerous. In many cases the process led to several different designs being developed (but only for outline/planning stage) for the same building.

The masterplan has provided clear guidance on the design of buildings, streets and the neighbourhood, making particularly good use of on-street car parking and street trees. Public realm finishes such as paving are not specified, though. The result has been a coherent identity and urban structure, but a sometimes confusing public realm of contrasting and conflicting finishes and street furniture.

The quality of design has been maintained through the use of competitions, not just for the masterplan, but also for the design of the individual buildings and the public realm. While this has involved the unsuccessful entrants in a great deal of abortive work, it has proved to be an effective means of keeping design standards high.

Most of the uses originally conceived in the masterplan are now in place. Exceptions are some of the proposed office space (newly built office space is expensive, and has to compete with the nearby city centre) and any pub (it has not proved possible to provide a building that will attract an independent landlord, and the large pub chains prefer locations in the city centre or the established suburbs).

One of the later stages of Gorbals redevelopment: a simple design with a distinctive corner
New Gorbals Housing Association 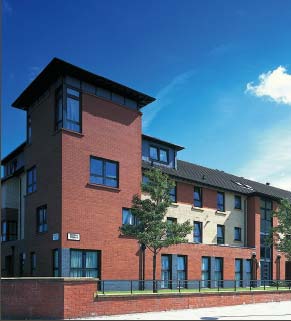 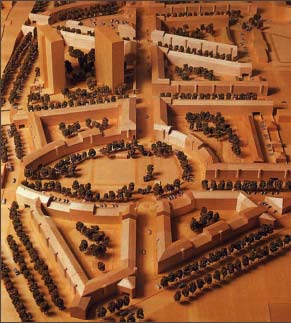 Crown Street's success has depended on controlling the land; drawing up a masterplan and design codes; embedding the masterplan at several levels of the planning system; and fighting for quality which was led by a specific project implementation team. It is an approach that could certainly work in many other places. It should be remembered, though, that masterplanning and regeneration can be slow processes. The Crown Street project is now in its seventeenth year.

The Crown Street Regeneration Project's control of the land (which had been mainly in council ownership) has enabled it to implement the masterplan. It has also made possible long-term investment on a scale sufficient to change attitudes about what the Gorbals area could become.

The achievement has also depended on the intense and consistent efforts of the partner organisations. In particular the New Gorbals Housing Association has been, in effect, the client for the area's regeneration. The association has insisted on high standards of design at every stage, from the initial vision to the masterplan, the public realm design, the design of individual buildings, and the management and maintenance in which it is actively involved.

Project type
Mixed-use development based on a network of streets, regenerating an area of social housing

A back court and drying green. While it is not wholly enclosed by buildings, the space is inaccessible to non-residents
New Gorbals Housing Association 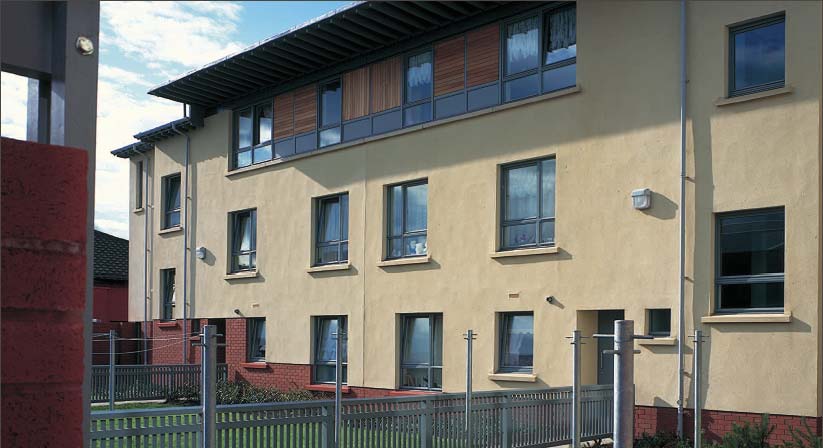