The impact of community ownership and careful planning has been dramatic. 'Where there was no work now there is a labour shortage. Where the school was on its way out almost for lack of pupils, it is now not big enough. And where homes were going to rack and ruin, there is now an accommodation shortage, despite homes being built and renovated.' says land reform campaigner Professor Jim Hunter.

Masterplan image to show how design requirements can be communicated 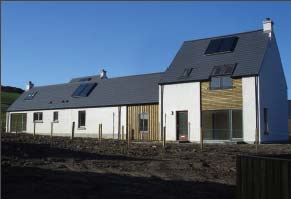 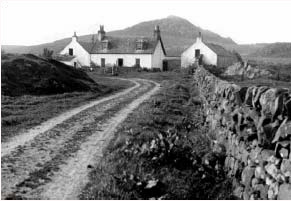 Seven miles long by a mile and a half wide, the Isle of Gigha (pronounced gee'a) is the southernmost island of the Inner Hebrides. A ferry service links the island's only village, Ardminish, to the mainland. Its natural beauty, sandy beaches and famous gardens make it an attractive place to visit, and it is more fertile than most Hebridean islands.

Five years ago Gigha's economy was not thriving. There was a shortage of accommodation suitable for new businesses, and only one new house had been built in the past 30 years. The population was less than 100.

Anderson Bell + Christie's 2004 masterplan was preceded by the Isle of Gigha Heritage Trust's five-year development plan, published in 2001. This aimed at making the island socially and economically viable, with economically sustainable small businesses rather than second homes. The key to this dramatic renewal was the purchase of the island by the people themselves, with the help of grants from the National Lottery and the Highlands and Islands Enterprise. The island is now owned by the Isle of Gigha Heritage Trust.

The impact of community ownership and careful planning has been dramatic. 'It's quite extraordinary now that some of the problems are the precise opposite of the problems that have been a characteristic of this place for a long, long time,' says land reform campaigner Professor Jim Hunter. 'Where there was no work now there is a labour shortage. Where the school was on its way out almost for lack of pupils, it is now not big enough. And where homes were going to rack and ruin, there is now an accommodation shortage, despite homes being built and renovated.' 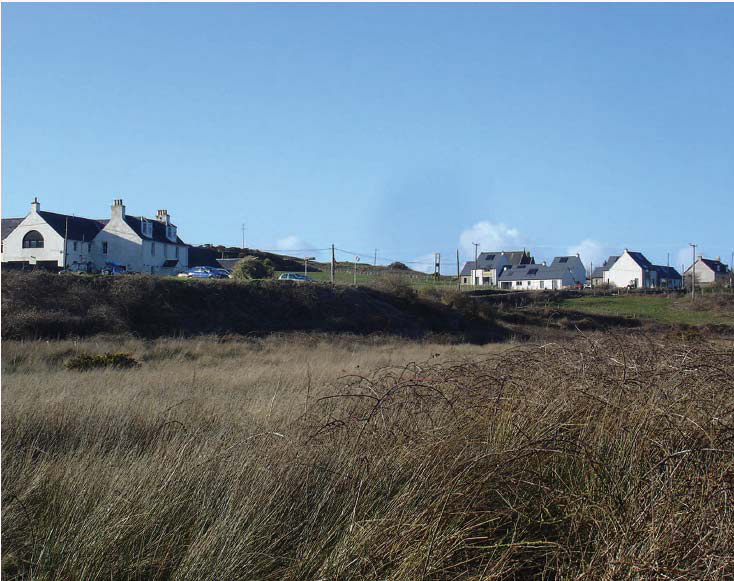 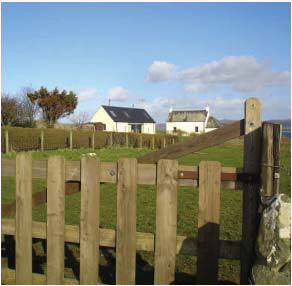 The challenge for the masterplan was to provide business accommodation and housing without blighting Gigha's exceptional landscape. Through the masterplanning process the community was looking for an appropriate pattern of development for the island. That pattern needed to be flexible, allowing homes and workplaces to expand to meet unpredictable future circumstances. It had to be sympathetic to the island's precious landscape. Because it is an island with a cohesive identity, it is thought important that Gigha should not be divided into a number of fractured areas that do not relate to one another.

Careful consideration of the island's buildings, and thoughtful discussion with the islanders, led to the choice of the cluster as the 'preferred development pattern'. Based on the form of a traditional Gigha farm steading, a cluster allows small buildings to be extended at a later date. This can provide more living or working accommodation, car parking, a garage, storage space or a workshop. Clusters are thought to be a means of avoiding inappropriate streets and culs-de-sac without leading to unacceptably fragmented development.

The cluster form is likely to minimise the impact of new and extended buildings, and of new infrastructure, on the landscape. It should allow scope for design diversity, reducing the need for strict design controls over each development. Clusters are energy-efficient, with buildings usually orientated to minimise exposure to prevailing winds and to maximise exposure to heat and light from the sun. Clusters are also thought to disperse parked vehicles, and to encourage walking and cycling. The masterplan proposes a network of paths and cycleways network that will be used by both residents and visitors.

The masterplan document presents its careful analysis of several alternative models of development, based on examples from other parts of rural Scotland. One of them was the crafting township, a settlement in which a number of crofts are quite widely spread out but share a sense of identity as a single place.

The masterplan also considered development in the form of planned villages, as on the isle of Islay. In particular there was an opportunity to create a village centre on Gigha for the first time, with development focused on Ardminish (which is at present a series of clusters). But if most future development was to be located in Ardminish, its character would soon start to become significantly different, and the whole island would change from the clustered pattern to one dominated by a clearly defined and discrete village.

Such a settlement would require streetlighting, pavements and more elaborate road junctions. A greater degree of design control would be needed to avoid the development being unacceptably prominent when viewed from the sea. The masterplan shows photomontages of what the effect might be. The islanders and masterplanners concluded that such a strategy would be unacceptable.

The final report is made up of two sets of documents. The main masterplan document describes the process; analyses alternative development patterns; describes the strategy; and outlines other constraints on development. 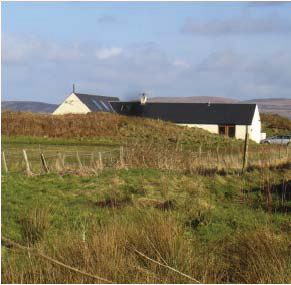 That document is accompanied by 11 design guides, each of which covers a different aspect of rural development:

1 Landscape (ensuring that developments relate sympathetically to their surroundings)
2 Access, parking and servicing
3 Clusters (how buildings within a group should relate to each other)
4 Proportion (controlling the overall appearance of individual properties)
5 Views and windows
6 Porches and sunspaces
7 Barrier-free design (ensuring accessibility for all)
8 Materials and details
9 Gardens and introduced planting ('a key component of any development')
10 Boundary treatments (fences and walls)
11 Routes and paths (links between developments).

Each design guide covers the traditional approach to a particular physical element, and then compares it to more recent examples to determine the most sensible strategy for future development.

The masterplan team, council planners and council road engineers then visited all the possible development sites identified by the trust. An information sheet, illustrated with photographs, was produced for each site. Islanders voted (through a secret ballot of the whole population) on their preferences of the 25 sites to develop.

The masterplanning process began with a 'mapping the island' day in which the islanders took part, applying their detailed local knowledge to the job of identifying broad areas where no development was wanted. The masterplanners digitally compiled a largescale photomontage of the island and printed it out at a very large size. Current maps of the island were marked up with everyone's comments, and residents brought in their own photographs.

The masterplan team, council planners and council road engineers then visited all the possible development sites identified by the Trust. An information sheet, illustrated with photographs, was produced for each site. Islanders voted (through a secret ballot of the whole population) on their preferences of the 25 sites to develop.

At an open day and public meeting, the revised masterplan and design guides were presented on a series of exhibition boards. The site information sheets for preferred development sites were also exhibited.

Planners from Argyll and Bute Council were involved in the masterplanning process to ensure that proposals would be compatible with the local plan, which was currently under review. The planners are now using the masterplan in assessing development proposals. This is both speeding up the planning process and raising standards of design.

The masterplan identified two of the sites in particular as suitable locations for sustainable housing, and where poor design would have a significant impact on important views.

These illustrations clearly explain the principles underlying good design, rather than dictating how buildings should look 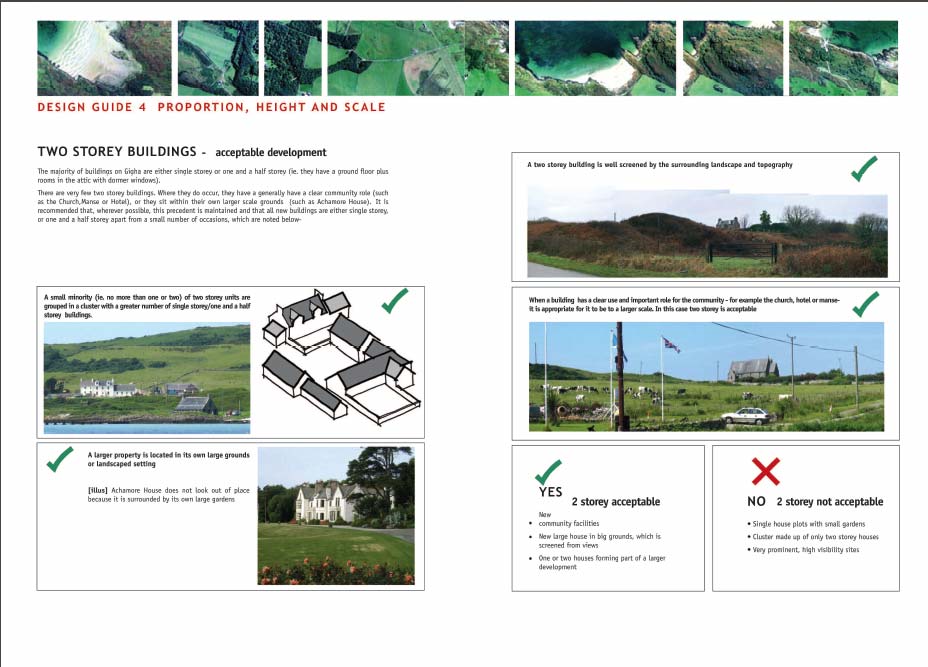 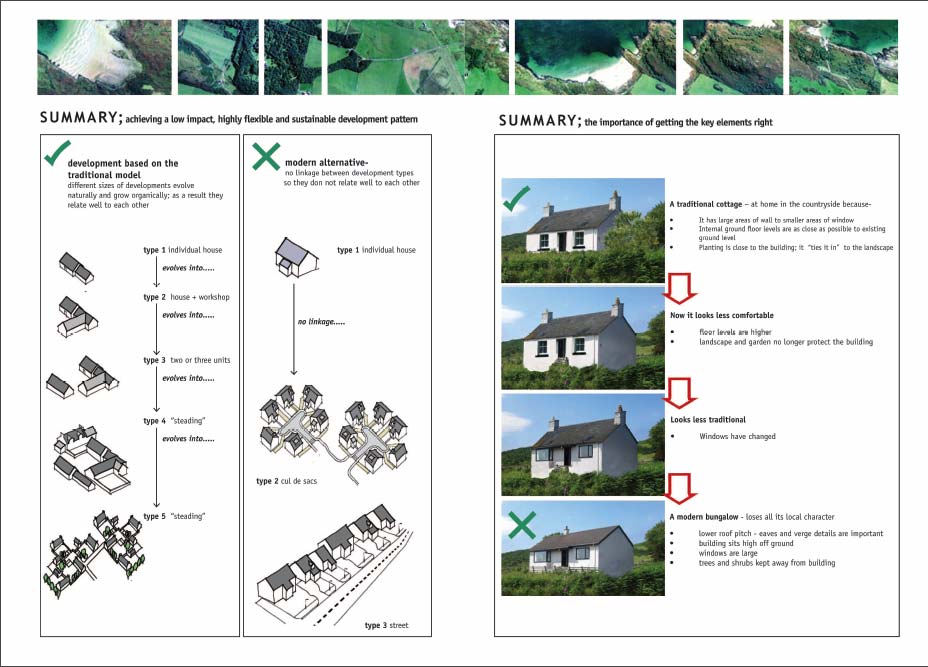 A design competition (run by the Royal Incorporation of Architects in Scotland) was held to ensure a high standard. The competition was won by CP Architects. Following this, Fyne Homes has built 18 new homes, a significant number for a small island.

In view of the lack of building carried out on Gigha in recent years, the Heritage Trust has formed a construction consortium with Fyne Homes and three local builders to carry out home improvements and build new homes. Building apprentices are being trained, and a small quarry on the island provides local materials.

The regulations, professional practice and market trends that shape development these days all tend to make rural areas urban or suburban. The Gigha masterplanning process is a model of how to promote development without sacrificing traditional and highly valued rural qualities.

Many masterplans look alike. The patterns of development that they specify can often follow whatever happens to be the urban design orthodoxy of the day. The Isle of Gigha Masterplan, on the other hand, proposes a pattern of development appropriate to the island's particular circumstances. Its analysis is clear and thorough, providing a detailed picture of the island's landscape and describing how many past generations found ways of living that made the most of local conditions.

The masterplan and its design guides seem likely to support improved living conditions and a healthier local economy, while respecting the traditions that make the island special. Early experience suggests that the islanders, the Trust, the housing association and the local authority are committed to the masterplan, seeing it as an essential complement to the community landownership. The test will be whether, in several years time, new forms of development have evolved that provide the flexibility needed by householders and small local entrepreneurs, whilst maintaining Gigha's traditional qualities.

This masterplan is concerned with a whole island and a complete, self-contained community. At stake is not just the quality of development, but the character of the place and the health of its economy. The island's population peaked at 700 in the eighteenth century and, until recently, was less than 100. The population is now around 150, a relatively large increase. The future of such a place
in the modern world has to be carefully thought out. The island's community ownership, the active involvement of the islanders in the masterplanning process and the commitment of the registered social landlord, Fyne Homes, help to give Gigha a better chance of a successful future than seemed possible just a few years ago.