7 Overview of Gypsy/Traveller accommodation in Scotland

7.1 The previous sections have presented available evidence on public Gypsy/Traveller sites, private sites and unauthorised encampments across Scotland. This has identified a total of 54 sites across Scotland, including 29 public and 25 private sites. These 54 sites provide a total of 613 pitches, with the great majority of these let on a permanent basis.

7.2 The study has also identified a total of 406 discreet locations across Scotland used for unauthorised Gypsy/Traveller encampments over the last 3 years, accounting for an average of 414 encampments per year.

7.5 The east of Scotland accounts for most of the local authorities with higher levels of Gypsy/Traveller provision, with the most significant concentrations in the Forth Valley region, Fife, Highland, Aberdeen City, Aberdeenshire, Moray, and Ayrshire. These regions together account for 52% of public site pitches, 82% of private pitches, and 76% of encampment locations – while representing 32% of the Gypsy/Traveller population[16]. In contrast, the Glasgow & the Clyde Valley SDPA area accounts for 12% of public site pitches and 10% of encampment locations (and does not have any recorded private sites), while representing 25% of the Gypsy/Traveller population. [17] 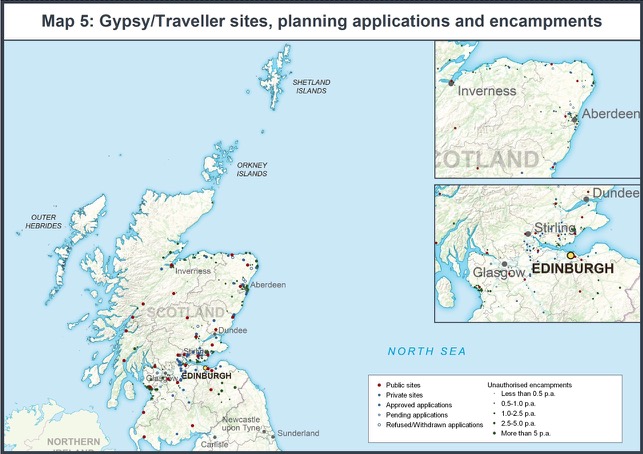