3.1 This section provides an overview of current public sites for Gypsy/Travellers provided by Councils and Registered Social Landlords (RSLs) across Scotland. Findings are based on data returns from local authorities and RSLs, and include comparison with previous data collection exercises where relevant. These include a data collection exercise by the Scottish Housing Regulator in early 2018[4], the 2011 Census, and reports of the Twice-Yearly Count of Gypsy/Travellers up to July 2009 (the last Count).[5]

3.2 Data returns identify a total of 29 public Gypsy/Traveller sites across Scotland. This represents a small reduction in site provision since 2009, where 31 active sites were recorded.

3.3 A total of 397 active pitches are provided across the 29 sites. This equates to
an average of 13.7 pitches per site, although public sites vary considerably in size from 4 to 21 pitches. 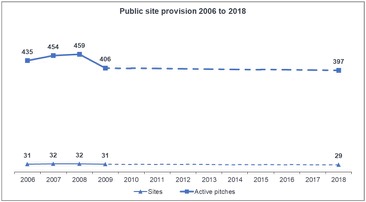 3.5 A total of 20 local authorities/RSLs provide one or more public Gypsy/Traveller sites; the remaining 12 local authority areas do not have any public Gypsy/Traveller site provision.[6] Fife, Highland and Aberdeenshire report the largest public site provision, together accounting for nearly a third (31%) of all public site pitches across Scotland.

3.6 Data returns indicate a small number of changes in public site provision since the Scottish Housing Regulator (SHR) report in March 2018, although the overall number of sites remains at 29. The main changes of note are:

3.7 The reduction in public site pitches since the 2008 Twice Yearly Count (a net loss of 62 pitches) also reflects several longer-term changes in provision. The most notable has been a reduction in supply across North Lanarkshire (of -20 pitches), West Lothian (-15), East Dunbartonshire (-15), East Lothian (-12), Argyll & Bute (-11) and Glasgow (-9 pitches). 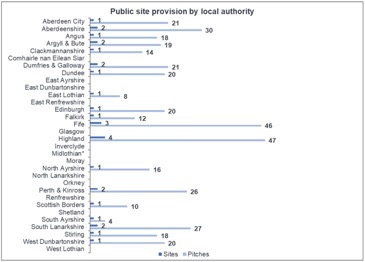 3.8 Map 1 over the page shows the 29 currently active public Gypsy/Traveller sites in Scotland.

3.9 Permanent pitches account for a large majority of current provision; 373 are currently let or are available to let, which is equivalent to 88% of all pitches (and 94% of active pitches). A total of 24 pitches are occupied or available for temporary use across Aberdeen City, Aberdeenshire and Scottish Borders, equivalent to 6% of all pitches across Scotland. However, several other landlords noted that public site pitches can be made available for temporary occupancy where required. A total of 29 pitches are currently out of use for repair, refurbishment or other uses, equivalent to 7% of all public site pitches.

3.11 The 351 let pitches is equivalent to an average occupancy rate of 88%. Levels of site occupancy vary significantly across local authority areas; 16 of the 29 sites report 100% occupancy, while 5 sites report occupancy of less than 70% (and 2 sites of less than 50% occupancy). Sites with lower occupancy include those across Aberdeenshire, Dundee, East/Midlothian and Fife.

3.12 Public site occupancy levels also appear to have increased over time. The 88% occupancy is slightly higher than that reported in the last Twice-Yearly Count (85% at 2009) and compares to occupancy rates of 75-80% between 2006 and 2008.

3.13 Data returns indicate that a large majority of public site tenants have occupied their pitches for six months or more; 83%, including 61% with tenancies of two years or more. A total of 60 tenancies started within the last 6 months, equivalent to 17% of all let pitches (and 15% of all active pitches).