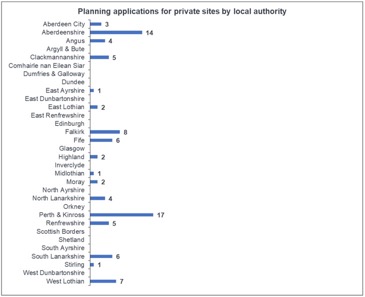 5.5 Planning records include a range of detail on applications for private Gypsy/Traveller sites, but do not provide information that can support quantitative analysis of the profile of proposals (other than the location and size information presented above). Published records do indicate that sites typically comprise a relatively small number of pitches, each with space for chalet and touring caravans, vehicle parking, and an amenity block. However, proposals are also diverse in terms of the number of pitches to be provided (as noted above), the associated infrastructure requirements, landscaping proposals, and other facilities to be provided on site.

5.6 Below we provide an outline of several applications to illustrate this profile. These include a mix of smaller and larger sites, proposals approved at the initial application stage, approved on appeal, and refused applications.

Proposal for the formation of 5 permanent Gypsy/Traveller pitches in an accessible rural area, on a former waste disposal site adjoining agricultural land. Proposed pitch layout included space for a chalet-type unit, up to 2 touring caravans and an amenity block to each pitch. The proposed site also included provision for a horse paddock.

A total of 44 representations were received to the applications, the great majority objecting to proposals.

The application was approved at the initial application stage, subject to conditions relating to approval of plans for waste and surface water drainage, provision of water supply, adequate vehicular access and parking, restrictions on noise generation, and approval of landscaping plans.

Proposal for formation of 6 permanent Gypsy/Traveller pitches in an accessible rural area. Proposed pitch layout included space for a chalet-type unit, up to 2 touring caravans, an amenity block to each pitch, and parking for 3 vehicles. The site plan also included stables adjacent to one pitch.

A total of 10 representations were received to the applications, all objecting to proposals.

The application was refused at the initial application stage. Reasoning included reference to the proposal being contrary to LDP policy relating to development in areas designated as ‘countryside around towns’, and the adverse visual impact within a countryside area.

An appeal was refused on the basis that the adverse impact on the rural environment outweighed the potential benefits of additional accommodation provision.

A proposal for change of use of disused agricultural land to form 5 permanent Gypsy/Traveller pitches in an accessible small town. Proposed pitch layout included space for a chalet-type unit, up to 2 touring caravans, an amenity block and parking for 3 vehicles.

A total of 280 representations were received to the planning applications, the great majority objecting to the proposal.

An appeal of the initial decision was successful, with planning permission granted subject to several conditions. These included conditions of local authority approval of materials used in the external finish, approval of a detailed landscaping plan, and limiting the hours of commercial deliveries and operation.

Proposal for change of use of agricultural land to form 4 permanent Gypsy/Traveller pitches in an accessible rural area adjacent to an urban area. The site had previously been used as an agricultural steading. Proposed pitch layout included space for a chalet-type unit, up to 2 touring caravans and an amenity block to each pitch. The proposal also included provision for storage of commercial vehicles and materials within a designated area.

A total of 45 representations were received to the applications, the great majority objecting to proposals.

The application was refused at the initial application stage. Reasoning included reference to business use being contrary to policies for the countryside location, and to the potential for proposals to generate additional pedestrian crossing of the public road. Published reports also indicate that the retrospective nature of the application was a factor in the decision to refuse permission.

An appeal of the initial decision was successful, with planning permission granted subject to conditions. These included conditions that each pitch is occupied by a single Gypsy/Traveller household, and conditions relating to access, lighting and landscaping, and to ensure the main use of the site remains for residential caravan accommodation. 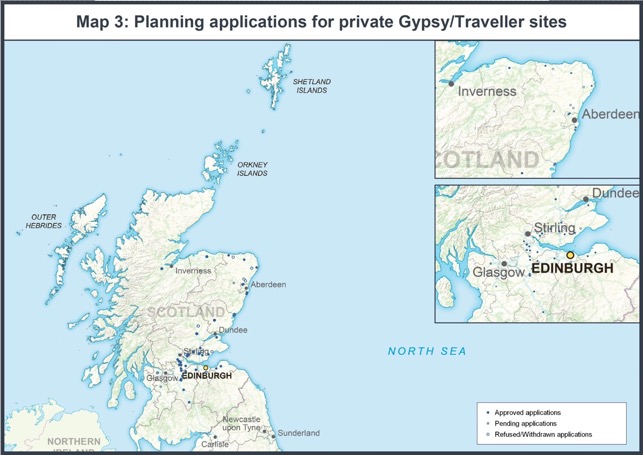 5.10 The 53 approved planning applications for Gypsy/Traveller sites represent 60% of all applications recorded. These include 35 approved at the initial application stage, and 18 approved on appeal after being refused at initial application. Approved applications propose to provide a total of more than 200 private site pitches, equivalent to an average of around 4 pitches per site although proposals range from single pitch to 16 pitch sites.

5.12 These cases indicate that conditions most commonly relate to restrictions on site occupancy and use, landscaping of sites and screening to mitigate visual impact, foul and surface water drainage, and vehicular access arrangements: 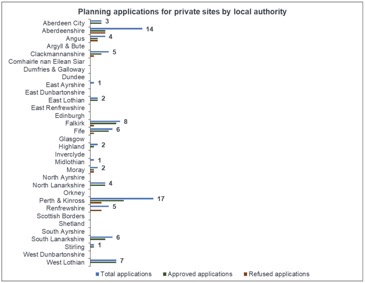 5.13 As noted earlier, 34 planning applications for Gypsy/Traveller sites were refused at the application stage, with 16 of these refusals remaining unchallenged by the applicant, being upheld at appeal or subject to an as-yet-unresolved appeal. Refused applications were broadly similar to all applications in terms of their proposed size, although all were for sites providing fewer than 10 pitches.

5.15 Published decision notices indicate that reasons for refusal most commonly relate to proposals being contrary to the Local Development Plan and Strategic Development Plan policies. This included some which noted that material considerations in favour of proposals (most commonly an identified need for Gypsy/Traveller accommodation) were insufficient to outweigh these points. LDP and SDP policies were cited as a key reason for refusal for 20 of the 28 applications for which information is available, most frequently with reference to proposals having an adverse impact on the character of the area. This included reference to adverse impact on countryside settings and failing to meet policy criteria for development of agricultural land, but also to designation of landscape value such as Sites of Special Scientific Interest, ‘areas of landscape significance’, ‘undeveloped coast’ or ‘countryside around towns’. Other reference to LDP and SDP policies included proposals being contrary to countryside development policies, to applicants having failed to demonstrate a need for additional Gypsy/Traveller provision, to a proposed business use being contrary to policies on the countryside location, and one case where development of Gypsy/Traveller sites is not permitted within established residential areas.

5.16 Decision notices also highlight a range of other reasons for refusal of planning permission for Gypsy/Traveller sites. These are summarised below.