6.1 This section provides an overview of unauthorised Gypsy/Traveller encampment activity across Scotland over the last three years.[12]

6.2 Unauthorised encampments are typically the result of Gypsy/Travellers stopping for a short period when travelling through or visiting an area. Encampments vary in size from small family groups (typically 1-2 vans) to larger groups of up to 20+ vans. Locations used also vary considerably, and can include open ground in rural locations or within/adjacent to towns, industrial locations, and retail or business parks.

6.3 Findings are based on data returns from local authorities, and include comparison with data previously published via the Twice-Yearly Counts of Gypsy/Travellers up to July 2009[13]. As is noted in section 1, local authority data on unauthorised encampment activity is largely based on reporting of encampments by Council officers, other agencies and local communities. As such, it is difficult to assess the extent to which data provides a comprehensive account of encampment activity. For example, anecdotal evidence indicates that local authorities are more likely to be made aware of larger encampments and/or those in more ‘visible’ locations, but that encampments in more remote rural areas may go unreported.

6.5 Local authority returns identify a total of 406 discreet locations across Scotland used for unauthorised Gypsy/Traveller encampments over the last 3 years. 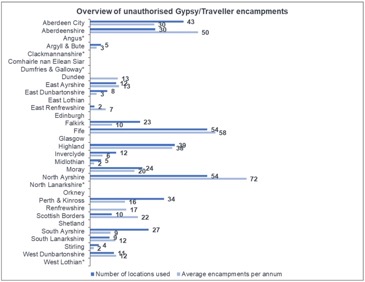 * Data not available for local authority

* Data not available for local authority

6.8 Map 4 shows locations known to have been used as unauthorised encampments by Gypsy/Travellers.

6.11 Mapping also indicates that encampment locations are typically in and around small towns and urban areas, with few encampments recorded in areas classified as ‘accessible rural’ or ‘remote rural’.[14] This is consistent with previous research which has identified employment and visiting family members as potentially significant factors in Gypsy/Traveller travel patterns, and access to amenities as influencing choice of encampment location.[15] However, feedback also indicates that the limited number of rural encampments recorded by local authorities may be in part due to these being less visible to landowners and local communities, and thus less likely to be reported. 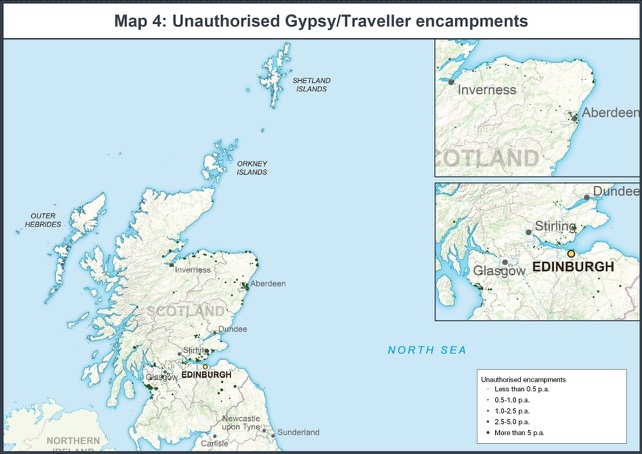