4.1 This section provides an overview of currently active private Gypsy/Travellers sites across Scotland. Findings are based on data returns from local authorities, triangulated with information on sites with planning approval published via e-planning. Where relevant, we also include comparison with data previously published via the Twice-Yearly Counts of Gypsy/Travellers up to July 2009.[7]

4.2 Local authority returns identify a total of 25 active private Gypsy/Traveller sites across Scotland. This represents a small increase from the 22 private sites reported by the last Twice-Yearly Count in 2009.

4.3 The 25 active private sites provide a total of 216 pitches, equivalent to an average of around 9 pitches per site. This is somewhat smaller than the average of 13.7 pitches per public site, although informal feedback from local authorities indicates that private sites are similar to public provision in terms of their variable size (from single pitch sites to 30 or more pitches). 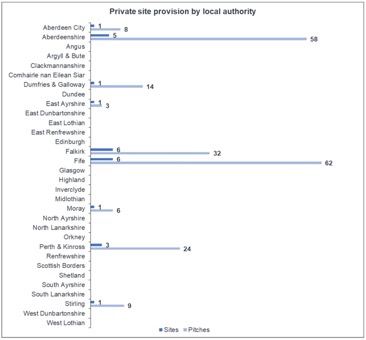 4.6 Map 2 over the page shows the 25 currently active private Gypsy/Traveller sites in Scotland. 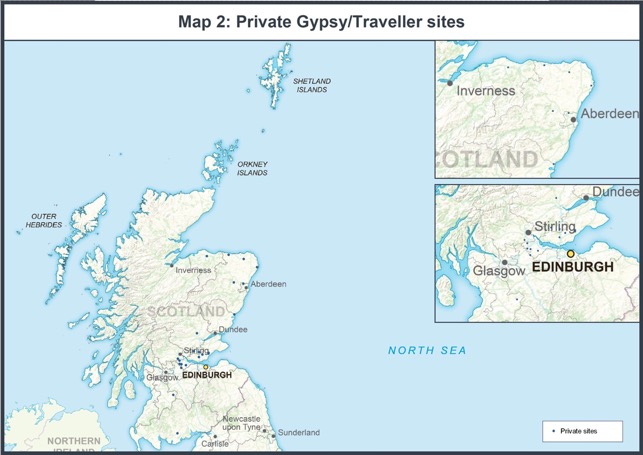 4.7 Private Gypsy/Traveller site provision is similar in profile to public sites, being dominated by permanent pitches. Around 9 in 10 (91%) private site pitches are let on a permanent basis, while 9% are temporary lets (all private temporary pitch provision is in the Aberdeenshire area). However, it should be noted that local authority records are unlikely to include details of any short-term or informal arrangements between site owners and individual households.